The city of Houston has been taken over by the Gaystapo and its homosexual leader Mayor Annise Parker. It wasn’t enough to elect a self-proclaimed lesbian as the mayor of the city. The City Council, in an 11-6 vote, has now shoved the gay agenda done the throats of the people of Houston and those who visit the city in one of the most absurd and ominous laws ever written.

“It’s now legal for men to use women’s bathrooms, showers, and dressing facilities – and vice-versa – thanks to the passing of the Equal Rights Ordinance in Houston, TX last Wednesday night.

“Mayor Parker, Houston’s first openly gay mayor, called it ‘most personally meaningful thing I will ever do as mayor.’

“The ordinance’s stated goal is to eliminate discrimination in housing and employment for gays, transgenders – 14-characteristics in total – including race, ethnicity, age, religion and disability.”

The radical ordinance runs 34 pages. This means that there is lots of room to find ways to prosecute anybody who opposes the law in the smallest way. Lawsuits will come in a flurry.

What does the new set of laws mean for the average Houstonian and anyone who visits the city? Dr. Steven Hotze writes:

“Mayor Annise Parker’s ordinance would include minority status for the so called ‘transgendered,’ allowing a biological male to legally enter women’s public bathrooms, locker rooms and shower areas. All he has to claim is that he ‘thinks of himself as a woman.’

“If you, as a business owner, disapprove of an individual’s actions or a person’s moral character, then you should not be coerced or forced by law to accept or approve their behavior in violation of your conscience and your First Amendment rights. According to this ordinance, if you refuse to hire or do business with those who practice or promote sodomy or other deviant sexual activities, or refuse the so called ‘transgendered’ access to female restrooms, then you would be prosecuted as a criminal. Shame on Mayor Parker and the city council for passing an ordinance that would put business owners and their businesses at risk for criminal prosecution because they would not violate their moral principles.”

So what should be done? A petition drive has been started to get the needed 17,000 signatures to force a citywide referendum to repeal this ordinance. This must be done before the June 30th deadline. If you live in Houston and attend a church, put pressure on your pastor, deacons, and elders to secure signatures.

In the meantime, the men of the city should occupy the women’s bathrooms in the name of “equal rights.” If you are asked why you are there, just say, “I think of myself as a woman today.” Maybe after this happens enough the women of Houston will rise up in protest.

Go to the No UnEqual Rights website for more information. 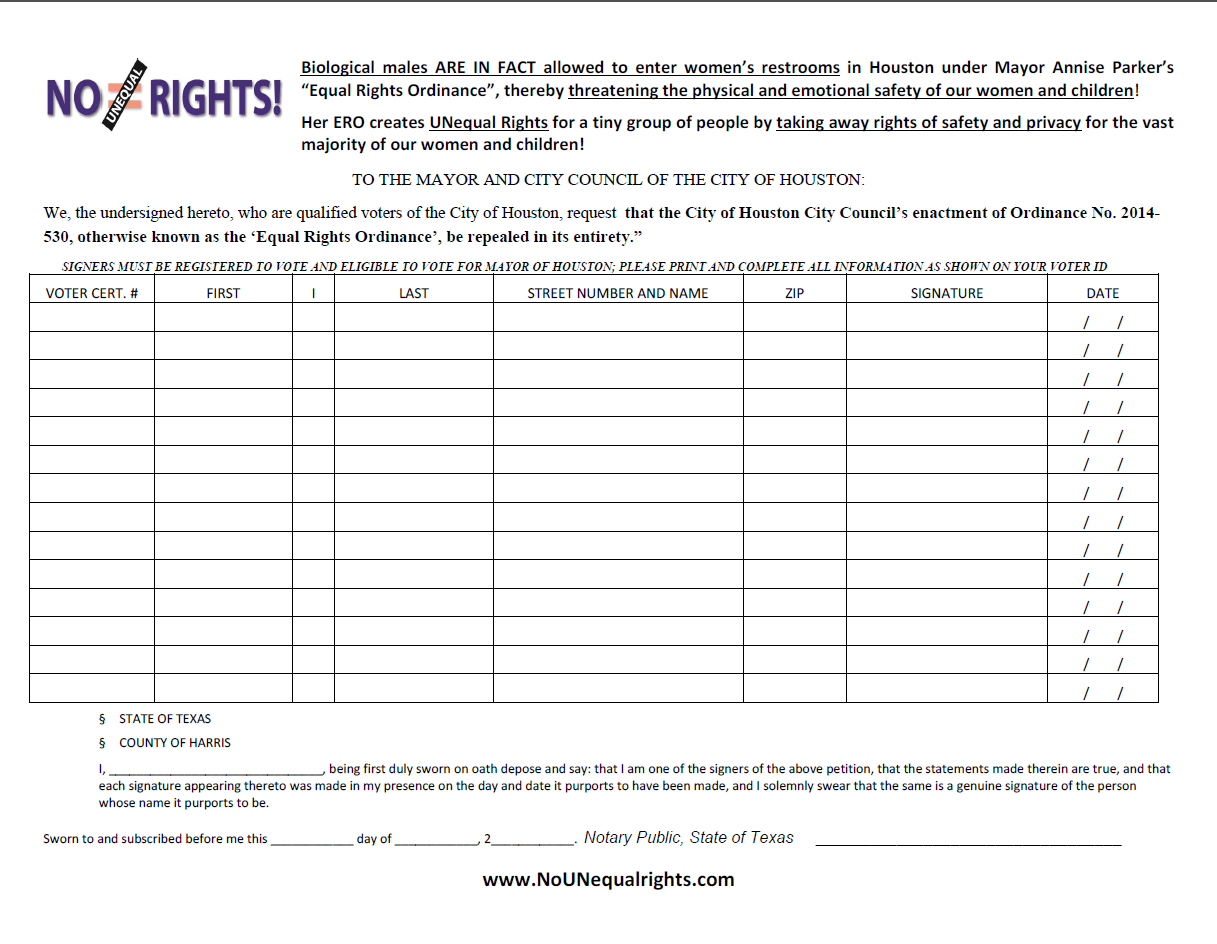