A similar game was developed by Elizabeth (Lizzie) J. Magie Phillips in 1903. The Landlord’s Game, as it was called, was self-published in 1906. “Although The Landlord’s Game was patented, it was not taken up by a manufacturer until 1910, when it was put into production in the U.S. by the Economic Game Company of New York. There were other board games based on the buying and selling of land leading up to the ever-popular Monopoly. 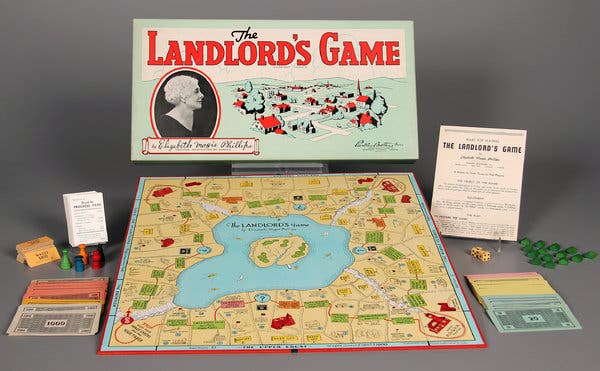 There’s good historical evidence that Monopoly is based on The Landlord’s Game for the simple fact that Parker Brothers bought the patent rights for $500 in 1935 and there is an early old board game that some say bears a striking resemblance to Monopoly.

Monopoly money is not real money, but it could be if our government said it was and controlled its production.

Boom and bust economic cycles are made worse by government interference. Left alone, the markets most often smooth themselves out with fewer extreme highs and lows.

After the economic debacle of 2008, the government once again tried to fix the mess it created and as a result extended the economic recession.

The early developers of these games had hoped people would learn basic economic principles from them. Some people have. They’re called politicians and banksters. Here’s one of the rules from Monopoly:

Besides the Bank’s money, the Bank holds the Title Deeds, and the houses and hotels prior to purchase by the players. The Bank pays salaries and bonuses. It sells and auctions properties and hands out the proper Title Deed cards when purchased by a player, it also sells houses and hotels to the players and loans money when required on mortgages.

“The Bank collects all taxes, fines, loans and interest, and the price of all properties which it sells and auctions. The Bank ‘never goes broke.’ If the Bank runs out of money, the Banker may issue as much as needed by writing on any ordinary paper.”

Don’t ever say that politicians don’t learn anything. They’ve learned their lessons well even if we haven’t. United States currency is different from Monopoly money in one way: Our government prints it, values it, and forces us to use it as currency at an ever-decreasing value while calling the result “prosperity.” In reality, it’s theft by dilution.

The Bible considers inflation, an increase of the money supply via fiat currency, to be a violation of the law: “Your silver has become dross, your drink diluted with water” (Isa. 11:22). Clipping coins, adding a base metal to silver and gold, and printing money out of thin are no different from reaching into people’s bank accounts and stealing the assets.

“You shall have just balances, just weights, a just ephah, and a just hin; I am the LORD your God, who brought you out from the land of Egypt” (Lev. 19:36).

What would happen to a company that was adding water to its wine or sawdust to its cement mix? They would be prosecuted for fraud.

And yet our government does not see a problem diluting the value of our money by a process called “quantitative easing.” Our economy is being propped up by fake money that in time will be worth as much as Monopoly money.

There was a time when our coinage was silver and gold, and government-created certificates were used that could be redeemed for the physical metal. Today’s coins are made from base metals that have limited value when compared to the trading prices of silver and gold.

Christian legal theorists have understood the process of assessing biblical laws and determining how to make contemporary application. For example, Swiss Reformer Pierre Viret (1511–1571) “felt that all laws affecting public morals and related to spiritual values should be drawn directly from the moral law of God. However, he believed that these absolute and eternal laws of God had to be geared to the times in which people lived and the national temperament of the country to which the laws were to be applied.”1

Viret’s use of the Eighth Commandment—“You shall not steal” (Ex. 20)—and its application to the civil sphere is instructive. He applies it to “those who clip coins2 and . . . those who consciously use false money and particularly of those responsible for the public treasury.”3 Modern-day monetary theory and practices are clear violations of the Eighth Commandment. Removing the silver from our nation’s coins in 1963, printing money with nothing to back it other than the government mandating its worth, and deficit spending are just three examples.

Israel was judged by the way it failed to keep God’s commandments. This included economic laws that adversely affected widows and orphans and the general population: “Your silver has become dross, your drink diluted with water. Your rulers are rebels and companions of thieves; everyone loves a bribe and chases after rewards. They do not defend the orphan, nor does the widow’s plea come before them” (Isa. 1:22–23).  This indictment is based on laws set forth in the Mosaic legislation, in particular, Deuteronomy 25:13–16. These verses don’t say anything in particular about debasing precious metals and passing them off as unadulterated and diluting wine and advertising and selling it the real thing, but the application to monetary policy and consumer issues is clearly evident in the way it is applied in Isaiah (also see Lev. 19:35–37; Prov. 11:1; 20:23; Ezek. 45:10; Mic. 6:11).

Why the Free Market Can’t Be Planned by You, Me, Economists, or the Government