The Question Democrats and Republicans Refuse to Ask

“Judges are like umpires. Umpires don’t make the rules; they apply them.” On the opening day of testimony before the Judiciary Committee, then-Supreme Court candidate John Roberts used this baseball metaphor to describe his judicial philosophy. Joe Biden, who was then a Senator, stated that “the metaphor is not very apt, because in baseball a set rule defines the strike zone.” Biden went on to say: “Without any knowledge of your understanding of the law — because you will not share it with us — we are rolling the dice with you, Judge.”

The Biden of today is all over the moral (rule) map. He is supporting some of the craziest political ideas, and ultimately, there’s no way to counter them in terms of ultimate moral principles.

Does anyone remember how the Senate Judiciary Committee, particularly Biden, attacked Clarence Thomas for believing the Constitution had to be interpreted in the light of a higher law? While the Constitution states that it is the “law of the land,” there is very little actual law in the Constitution. For example, there are no prohibitions against murder, theft, or rape and no right to abortion or same-sex marriage. So why are these actions right or wrong? The Constitution doesn’t say. The Constitution implements whatever moral or immoral worldview is in vogue at any given time.

This was the Framers’ biggest mistake. “We the People” can’t be the basis for what’s right or wrong.

Thomas believed that natural law was that external foundational law. It was for the Founders: “the law of Nature and Nature’s God.” But on what does Natural Law stand. What’s its pou sto? Archimedes of Syracuse (c. 287-212 BC) claimed to be able to move the earth if he had a fixed platform on which to stand and a long enough lever: “Give me somewhere to stand and I will move the earth,” he is reported to have said.1 Obviously, this was hyperbole, but the principle is sound.

Upon hearing his bold claim, King Hiero put Archimedes to the test. He challenged him to move a ship that others had tried but failed to move. Archimedes constructed a system of levers and pulleys that were anchored on firm ground. In the end, he moved the ship where others had failed. 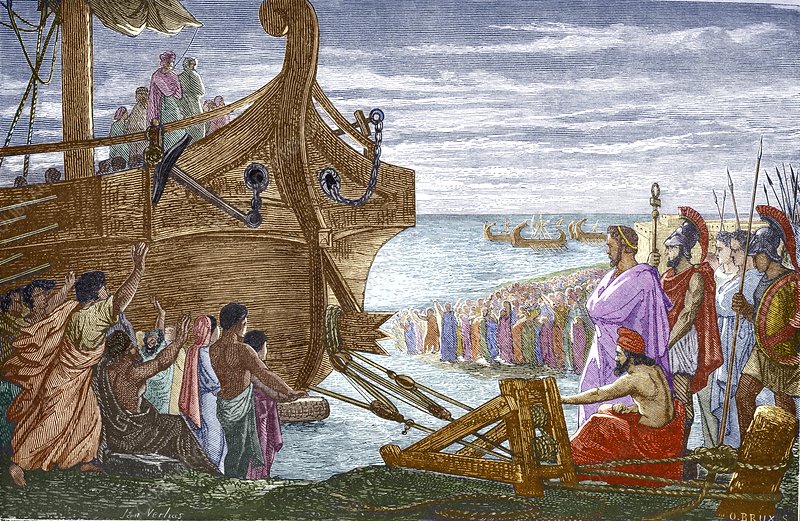 Without a pou sto, an unmovable foundation, Archimedes had nothing on which to rest the fulcrum necessary to pull off so colossal a feat.

The constitutional framers believed that “the laws of nature and of nature’s God” was almost universally accepted. This is why Thomas could write: “We look at the Natural Law beliefs of the founders as a background to our Constitution.”2. When the left-leaning members of the committee heard this, they went on the attack. Thomas was saying that there are fixed moral laws written into the created order that even the Constitution and its interpreters are bound to follow.

No wonder Justice John Roberts took the equivalent of the “Fifth.” He wasn’t about to grab hold of the higher law Tar Baby because he knew Biden’s view of natural law. During the Thomas hearings, Biden wrote an article that appeared in the Washington Post. ((Joseph R. Biden, Jr., “Law and Natural Law: Questions for Judge Thomas,” The Washington Post (September 8, 1991), C–1.)) He claimed the following for his version of natural law:

According to Biden, natural law is whatever the courts say it is or isn’t. In fact, a Supreme Court Justice doesn’t have to believe in law as a fixed moral principle. He doesn’t want such a thing. He or she needs flexibility.

“In our system,” Biden wrote, “the sole obligation of a Supreme Court justice is to the Constitution. Natural justice can supply one of the important means of understanding the Constitution, but natural law can never be used to reach a decision contrary to a fair reading of the Constitution itself.”

To repeat, there is almost no law in the Constitution. Biden knows this. This is why those on the Left (and a good number on the Right) want to be the judicial gatekeepers. Personal opinions are the basis of moral decision making. This is why there cannot be a higher law governing the Constitution and the decisions of judges. Biden’s article does not tell us anything about how to determine what’s right or wrong, and that’s the way he wants it.

What happens when two individual choices are in conflict? That’s why we need judges, Roberts and Biden would say. But this doesn’t answer a more fundamental question: Who writes the rules for the rule book that the judges (umpires) are to follow? This is the one question that no one dared to ask Judge Roberts or any other judge, but it’s the only one that matters!

“It is clear that they will either stand upon the foundation of a sovereign God and his providential revelatory word or they will stand on air.”3

Natural law advocates “are like the Irishman who preferred the moon to the sun, because the sun shines in the day-time when there is no need of it, while the moon shines in the night time; so these moralists, shining by the borrowed, reflected light of Christianity, think they have no need of the sun, from whose radiance they get their pale moonlight.”4

Dutch theologian Herman Bavinck (1854–1921) had this to say about Natural Theology that is applicable to Natural Law:

There is no such thing as a separate natural theology that could be obtained apart from any revelation solely on the basis of reflective considerations of the universe. The knowledge of God that is gathered up in so-called natural theology is not the product of human reason.

Rather, natural theology presupposes, first of all, that God reveals himself in his handiwork. It is not humans who seek God but God who seeks humans, also by means of his works in nature. That being the case, it further presupposes that it is not humans who, by the natural light of reason, understand and know this revelation of God. Although all pagan religions are positive [concrete], what is needed on the human side is a mind that has been sanctified and eyes that have been opened in order to be able to see God, the true and living God, in his creatures.

And even this is not enough. Even Christian believers would not be able to understand God’s revelation in nature and reproduce it accurately had not God himself described in his Word how he revealed himself and what he revealed of himself in the universe as a whole. The natural knowledge of God is incorporated and set forth at length in Scripture itself. Accordingly, Christians follow a completely mistaken method when, in treating natural theology, they, as it were, divest themselves of God’s special revelation in Scripture and the illumination of the Holy Spirit, discuss it apart from any Christian presuppositions, and then move on to special revelation.

Even when Christians do theology, from the very beginning they stand with both feet on the foundation of special revelation. They are Christ-believers not only in the doctrine of Christ but equally in the doctrine of God. Standing on this foundation, they look around themselves, and armed with the spectacles of Holy Scripture, they see in all the world a revelation of the same God they know and confess in Christ as their Father in heaven.5

A whole‑Bible ethic is the light by which all social theories gain their reflected light. The further we move away from the light of Scripture, the darker our world becomes. With man’s “cauterized and traumatized” sinful nature, there is no possible way that we can move in the direction of natural law for the development of a comprehensive ethical social theory. “Such has been the deteriorating influence of sin that ‘the [work of the] law written on the heart’ and ‘the light of nature,’ although these remain, no longer suffice as the organ of signifying God’s will to man. A supernatural revelation has been necessary to reveal the law of duty, as well as to reveal the method of salvation through redemption.”6

Is Gog and Magog Battle About to Commence?

Romans 13 and the Persecution-Seeking Christian

The Question Democrats and Republicans Refuse to Ask