The Left has become a public embarrassment, more so than in past years. Everything is racist. If you voted for Trump you’re a Nazi. Following the law that was on the books during Obama’s tenure as President means that children held in detention centers while their parents are being legally processed because they’ve entered the country illegally are morally equivalent to Nazi work and death camps.

Then there’s Maxine Waters, a Democrat congresswoman from California, who’s calling on her brain-dead supporters to harass members of Trump’s cabinet. Here’s some of what she said:

The Democrats lost in 2016. They don’t like losing, so they’ve decided to bully their way back to power.

Make no mistake, this isn’t just about President Trump. Even if Vice President Mike Pence was president, this would still happen.

The PC liberals in this country increasingly seem to believe that they can bully their way to public policy goals. Celebrities instigate the behavior, the far left mimics the behavior, and the media enables it all.

Peter Fonda sent out a series of tweets this week, calling for Barron Trump to be ripped from his mother and put in a cage with pedophiles, then he went after Sarah Sanders and Kirstjen Nielsen tweeting that Sanders’ kids should be taken from her and Nielsen should be put in a cage, stripped naked, and whipped publicly with it filmed for posterity. (Fox News)

We need to remember that it was a Democrat, James Thomas Hodgkinson, who tried to kill some Republicans at a baseball practice field in June 2017. The Virginia Attorney General concluded it was “fueled by rage against Republican legislators, ” and “an act of terrorism.” 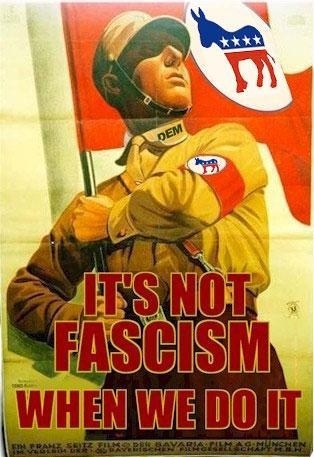 “Last night I was told by the owner of Red Hen in Lexington, VA to leave because I work for @POTUS and I politely left. Her actions say far more about her than about me. I always do my best to treat people, including those I disagree with, respectfully and will continue to do so,” Sanders tweeted on Saturday.

The claim is being made that asking Sanders and her party to leave the Red Hen restaurant is the same as the baker who refused to make a cake for a same-sex wedding. 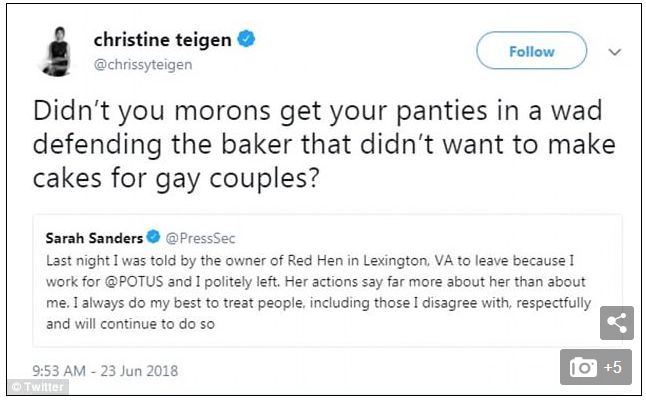 Jack Phillips did not refuse to bake a cake for homosexuals. He refused to make a cake for a same-sex wedding. There is a big difference. “Phillips decorates cakes for weddings, graduations, and other celebrations. He refuses to design custom cakes for Halloween, divorce celebrations, bachelor parties or other events that conflict with his religious views.”

Phillips isn’t doing anything different from what bakers for centuries have done.

I want to see what would happen if a Muslim printer refused to print t-shirts that read, “Pork Today, Pork Tomorrow, Pork Forever” for an upcoming barbeque festival.

A web designing company should not be forced to develop a website that promotes pornography. Such a principle protects everyone no matter what side a person may be on regarding a particular issue.

Consider the case of Blaine Adamson, the managing owner of the printing company Hands-On Originals (HOO) who was sued for not making t-shirts for a gay pride event:

“That constitutional principle, at issue because Mr. Adamson declined to produce advocacy materials for the Gay and Lesbian Services Organization (GLSO), protects all individuals, regardless of their beliefs,” the ADF brief explains.

“It is thus no surprise that ‘a lesbian owned and operated T-shirt company…,’ and groups that ‘strongly support …gay rights…,’ have publicly supported HOO. For just as surely as the First Amendment protects HOO against the GLSO’s discrimination claim, it also forecloses a religious-discrimination claim against an LGBT printer who refuses to create materials that disparage gays and lesbians. Thus, a ruling for HOO upholds the freedom of all who are asked to produce expression that they consider objectionable,” the filing explains.

“The government has no good reason for overriding a person’s freedom to peacefully live out his beliefs,” added co-counsel Bryan Beauman with Sturgill, Turner, Barker & Moloney, PLLC, of Lexington. “Everyone who contacts Blaine gets the expressive materials they’re looking for, because he will either create the expression for them or refer them to someone who will. It’s intolerant to insist that Blaine’s business must produce expression that violates his beliefs.” (WND)

If a Hillary Clinton supporter who owned a printing company refused to make MAGA hats, the owner would have been within her rights to refuse.

If the Red Hen restaurant had been asked by Sarah Huckabee Sanders to cater an event for a Make America Great Rally, the owners would have been justified to refuse.