The Birth of Jesus Was the Greatest Political Event in History

We don’t usually think of Christmas as a political event. I can assure you that Herod the Great thought of it that way as well as Rome. There was a tax involved (Luke 2:1). Herod would not have been troubled by an announcement that a child was born if he had learned that He would be the Jews’ personal savior who would save them from their sins and when they died they would go to heaven.

That was part of the message, but there was much more. Mary said as much in Mary’s Magnificat in the way God works in the world:

He has done mighty deeds with His arm;
He has scattered those who were proud in the thoughts of their heart.

He has brought down rulers from their thrones,
And has exalted those who were humble.

As long as these saved people honored the king, Herod and the Caesars were OK with Christians. It didn’t take long, however, for others to understand the full implications of what would happen when Christians applied the gospel consistently and fully to all of life: “they all act contrary to the decrees of Caesar, saying that there is another king, Jesus” (Acts 17:7). Just saying that Jesus was a king — the King — was enough to be charged with treason and political blasphemy.

At the time of the birth of Jesus Christ the State, or Caesar, was all-powerful in Rome. The Caesar was not only recognized as a wise and great leader, but as a god. In fact, Augustus was referred to as the “Son of God.” There was none above Caesar and anyone who threatened or appeared to threaten his authority was swiftly and violently dealt with. When Caesar would conquer a group of people he would proclaim the “gospel,” which was the word used to tell the conquered group that there was “good news”: Caesar was King and would now rule over them.1

This background helps explain why Herod the Great was troubled when he heard from the wise men that Jesus, the King of the Jews, was born. Jerry Bowyer asks, why would “all Jerusalem be troubled” with him? 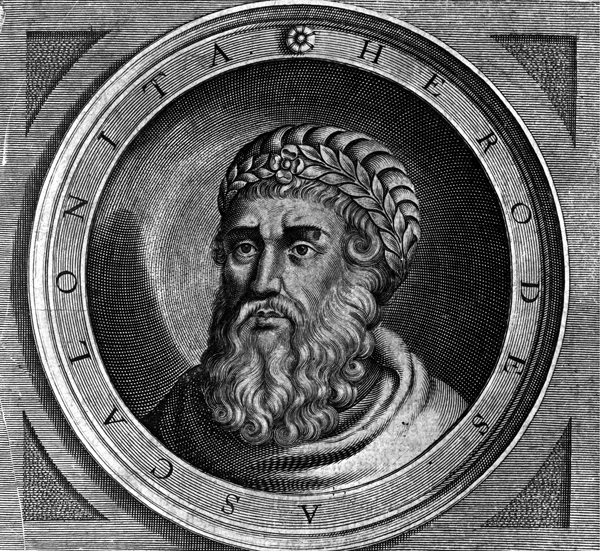 It is understandable that Herod would be troubled. He was an unpopular and brutal tyrant who was so paranoid about being displaced that he had his own sons murdered. He had a kingdom to lose. The Messiah would be a king, and there could only be on king of the Jews. But what about all of Jerusalem being troubled with him?

It is not obvious that the city would be troubled by this news, because it is after all good news. The very prophecy which is used to determine that Messiah will come from Bethlehem, promises extraordinarily good things….

The Herodian regime was based on economic exploitation, which means it represents a zero sum game mentality, and that led him, as it has led many, many tyrants after, to turn to genocide.

Herod became like Pharaoh. Jerusalem had become like Egypt (Matt. 2:15; Hosea 11:1; Rev. 11:8). Peter Leithart comments: “Matthew’s fulfillments turn on reversals and puns. Jesus fulfills Hosea 11:1, but Israel has become Egypt.” For a fuller development of this interpretation, see the following: “Israel Is the New Egypt in Matthew 2:15.”

When Herod the Great heard this question from the travelers from the east, it rattled him politically:

After Jesus’ birth, Wise Men from the east came to Jerusalem. They asked, “Where is the Child who has been born to be King of the Jews? When we were in the east, we saw His star. Now we have come to worship Him” (Matt. 2:1b-2).

Stars represented political power and prowess. Herod saw Jesus, while only a child, as a threat. According to the historian Josephus, Herod had three of his sons killed. It’s been said of this Herod, “It is better to be Herod’s pig than son.” What are a few slaughtered babies when it comes to possible competition to the Herodian dynasty? Little has changed since Herod’s day.

You might remember that Jesus was crucified because of His claim of being a king.

There was an inscription over the head of Jesus when He was crucified. Jesus’ death penalty was a political charge and therefore a threat to the Roman Empire and to every other empire (Matt.27:11; Mark 15:2; Luke 23:3; John 18:33). Pilate had written, “Jesus the Nazarene, King of the Judeans” (John 19:21). The Jews told Pilate: “Do not write King of the Jews” but that this Jesus only claimed that title for Himself. Pilate responded with, “What I have written, I have written.”

The initials INRI refer to the first letters of the inscription in Latin (Iēsus Nazarēnus, Rēx Iūdaeōrum) John 19:19), which in English translates to “Jesus the Nazarene, King of the Jews.” John 19:20 states that this kingly designation was written in three languages—Hebrew, Latin, and Greek. It was the use of the word “king” that was viewed as a perceived threat. Rome was already dealing with the Zealots, and Rome would meet them again during and after the destruction of Jerusalem in AD 70 on Masada three years later.

In the final years of Paul’s ministry, he was “preaching the kingdom of God” (28:31), not the rapture of the church or the quietude of the church. It was the kingdom. Not a far away post-rapture kingdom for a measly thousand years, but a forever kingdom that encompassed the here and now. “And He shall reign forever and ever.”

Capitulating to Losing Does Nothing but Make Losing a Spiritual Badge of False Ppiety.

The Birth of Jesus Was the Greatest Political Event in History