“Holmes helped move American legal thinking towards legal realism, as summed up in his maxim: ‘The life of the law has not been logic; it has been experience.’ Holmes espoused a form of moral skepticism and opposed the doctrine of natural law, marking a significant shift in American jurisprudence. As he wrote in one of his most famous decisions, his dissent in Abrams v. United States (1919), he regarded the United States Constitution as ‘an experiment, as all life is an experiment’ and believed that as a consequence ‘we should be eternally vigilant against attempts to check the expression of opinions that we loathe and believe to be fraught with death.’”

The constitutional experiment is over. Five unelected judges now rule on high creating rights ex nihilo, out of nothing, actually, like the birth of Athena, out of the head of the fictional god Zeus.

The Gods of Mount Olympus

If five judges can redefine marriage, then they can redefine anything and everything. Seven of them redefine the status of unborn children in a 1973 decision. They found the right to kill unborn babies in the “penumbra,” the shadows, of the Constitution. The same will be done by an appeal to the 14th Amendment that says nothing about same-sex marriage.

The biblical book of Habakkuk offers insight into what we as a nation have let take place:

For behold, I am raising up the Chaldeans,
That fierce and impetuous people
Who march throughout the earth
To seize dwelling places which are not theirs.
They are dreaded and feared;
Their justice and authority originate with themselves (1:6-7).

There it is. The Supreme Court has been defining justice and claiming to be the final authority to make judgments for a long time.

None of this should surprise us. Modern legal theory which denies the sovereignty of God over the nations also denies the sovereignty of God over the individual and everything else. When pushed on the point, there is no way to account for anything given Darwinian assumptions. Christians must face the steamroller effect of this set of assumptions. Laws are being put on the books that when fully implemented and applied will disenfranchise Christians to such an extent that they will not be able to speak the name of Jesus. 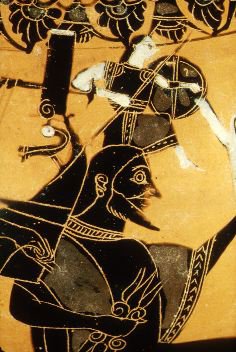 Birth of Athena Out of the Head of Zeus

Am I exaggerating? Not if what we heard in opening arguments in the Obergefell v. Hodge same-sex marriage case. Al Mohler writes:

“The Solicitor General of the United States announced that religious liberty is directly threatened by the legalization of same-sex marriage. Donald Verrili, representing the Obama Administration as the nation’s highest court considered again the issue of same-sex marriage, was responding to a question from Justice Samuel Alito. His answer confirms with candor the threat we have long seen coming.

“Verrilli’s answer puts the nation’s religious institutions, including Christian colleges, schools, and seminaries, on notice. The Chief Justice asked the unavoidable question when he asked specifically about campus housing. If a school cannot define its housing policies on the basis of its religious beliefs, then it is denied the ability to operate on the basis of those beliefs.”

We saw this coming a long time ago. The homosexuals knew it would come to this. They lied every step of the way. And why not? Homosexual marriage is one of the world’s biggest lies.