Liberals use the American system of liberty and freedom to gain power and then shut the door behind them once they are in power.

The Berkeley “Free Speech Movement” of the 1960s is a perfect example. It was the catalyst for the near overthrow of the secular university system in the United States.

“The Free Speech Movement (FSM) at the University of California at Berkeley during the Fall 1964 semester was the first of the 1960s campus student movements to make headlines all over the world. Lasting a little over two months, it ended with the arrest of 773 persons for occupying the administration building, the removal of the campus administration, and a vast enlargement of student rights to use the University campus for political activity and debate.”

After years of struggle, the Free Speech Movement got its way. In time, the activists took positions in the major universities, changed the curriculum, and set up anti-speech codes. They used the wedge of free speech so they could cut off competing speech.

At the University of Missouri, Melissa Click, Assistant Professor of the Department of Communication, called for “muscle” to stop the media from reporting on their protests: “Hey, who wants to help me get this reporter out of here? I need some muscle over here!”

She has since apologized, so everything is OK. At this point in time she is still employed at the university, although that may change. The university needs a liberal scapegoat.

If you’re interested, here’s a list of some of her “academic” interests that she teaches at taxpayer expense.

When a liberal does something wrong, a single apology will make everything right. So what did the President of the University of Missouri do wrong that led to his resignation? Nothing. And there’s the difference. He didn’t have to do anything wrong. There was a larger agenda.

Leftist radicals are never satisfied. Once they win their first demand, they move on to new demands. They saw how easily the administration folded. This emboldened them to demand more.

Here’s the latest by Mediate.com:

“The Missouri University Police Department (MUPD) sent an email to students Tuesday morning urging them to call them and report any hurtful speech they encounter on the campus.

“In an email that was flagged by several Missouri-based journalists, the MUPD asked ‘individuals who witness incidents of hateful and/or hurtful speech or actions’ to call the department’s general phone line ‘to continue to ensure that the University of Missouri campus remains safe.’ They suggest that students provide a detailed description of the offender, their location or license plate number, and even to take a picture if possible.” 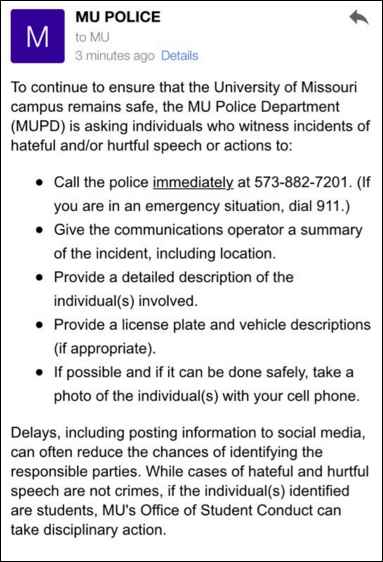 I propose that all the conservative students at the University of Missouri report the slightest incidence of liberal “hurtful” speech. It doesn’t matter what it is or whether it’s uttered by a professor or student.

Write up a report and send it to the Missouri University Police Department.