It’s been 50 years since Jim Ryun became the first high school runner to break four minutes for the mile, running 3:59 as a Kansas high school junior in 1964 and a then-American record 3:55.3 as a senior in 1965. It was a rare accomplishment. Only four high schoolers have run 4-minute miles.

As an aside, this is the 60th anniversary of the first 4-minute mile ever run. It was accomplished by Roger Bannister of England in May of 1954.

“In the 1952 Olympics in Helsinki, Bannister set a British record in the 1500 metres, but did not win the medal he expected. This humiliation strengthened his resolve to be the first 4-minute miler.”

Adversity breeds success if it’s embraced and challenged. Check out the story of another Kansas miler, Glenn Cunningham. Some aspiring filmmaker needs to put his story up on the big screen like Angelina Jolie is doing with Unbroken, “the true story of Louis Zamperini, an Olympian-turned-World War II pilot, who was shot down over the Pacific Ocean, survived at sea for two months and was then captured and placed in prisoner of war camps by the Japanese.”

Back to Ryun. The following is written by Joe Tuscano of the Observer-Reporter: 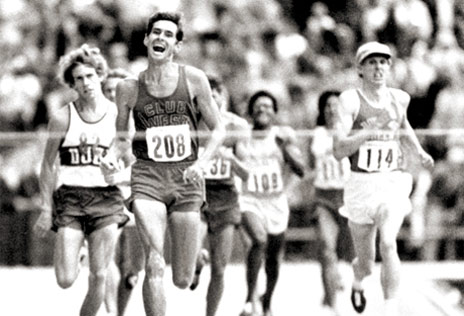 Maybe Jim Ryun had the most inauspicious start of any major sports figure in American history.

The church baseball team didn’t want him, the junior basketball team didn’t think much of his talents and cut him and the junior high track and field team thought his future might [reside] with something like the debate team, if one existed at East High School in Wichita, Kan.

“I ran because I couldn’t do anything else,” Ryun said in a self-deprecating style that makes him easily likable.

“I remember going to bed at night and asking God, ‘What do you want me to do with my life?’”

The answer was a runner.

The 66-year-old Ryun stood in front of a packed crowd Saturday morning at the DoubleTree by Hilton in the Meadows Lands for the Washington County Men’s Prayer Breakfast and related these and other stories of his great career.

The person who had such limited ability in most organized sports ended up with some impressive accomplishments.

School Bleachers Torn Down Because They Weren't "Equal"

The Self-Neutralized Church and the Rise of Adolf Hitler