The Savagery of Dan Savage Who Savages Parents of Dead Child

Dan Savage is a sexual savage. Not only does he engage in unnatural, irrational, and immoral same-sex sex called homosexuality, but he is savagely anti-God, anti-Christian, and anti-people. Savage “spews hate against Christians, Republicans, and even other gay people who think differently than he. He’s asserted that ‘monogamy is ridiculous’ and ‘unnatural.’ He’s remarked that the vagina is a ‘hole that sh*ts babies.’”

Savage is a homosexual bully. He bullied a group of young people at a journalism conference to accept homosexuality as normal and moral or be bullied for the rest of their lives until they accept the perversion. The tolerant Savage said of Republicans, “I wish they were all f***king dead.” You can read more of Savage’s bullying technique here. I’m warning you — it’s disgusting. Did I mention that he’s supported by President Obama and by Democrats in general?

Savage’s latest foray over homosexuality came by way of a series of Twitter posts over the suicide of Josh Alcorn. Josh wanted to be a girl. His parents refused to support his decision to mutilate himself that would have turned him into something that he wasn’t.

Because of this, he killed himself, and Savage began his savage attack: 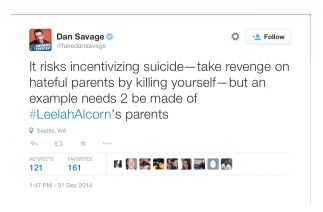 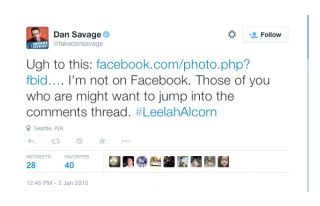 Josh’s mother said, “We told him that we loved him unconditionally. We loved him no matter what. I loved my son. People need to know that I loved him. He was a good kid, a good boy.”

But Josh wanted to be a girl. In his suicide note, Josh wrote, “I feel like a girl trapped in a boy’s body. . . . When I was 14, I learned what transgender meant and cried of happiness. I immediately told my mom, and she reacted extremely negatively, telling me that it was a phase, that I would never truly be a girl, that God doesn’t make mistakes, that I am wrong. If you are reading this, parents, please don’t tell this to your kids.”

Josh then signed the letter “Josh Alcorn” and then crossed out the name Josh and typed “Leelah.”

Should Josh’s parents have permitted their teenage son to have his penis and testicles removed? Would any parent permit this?

As parents, there were lots of things we denied our children. How many of us regret decisions we made as teenagers. For the most part, parents do know best. And since cutting off sex organs is a big deal, a permanent act that would have a lifetime of repercussions, Josh’s parents were right in objecting.

As expected, the homosexual community has turned Josh Alcorn into the poster child for transgenderism, always referring to him as “she” and “her.” A good case could be made that it’s the homosexuals who are partially at fault for Josh’s suicide by claiming that a boy can become a girl.

James White gets to the heart of this matter by clearing away the fog of moral relativism that affects the reasoning process:

“It is evil, morally evil, morally reprehensible, to attack Josh Alcorn’s parents for being (1) Christians, and (2) sane. These moral monsters (Dan Savage and every single person calling for hatred of Josh’s parents, to the point of seeking their prosecution!) can barely cover their detestation of the gospel of Christ, godliness, and the Christian worldview; and when they join together in their celebration of evil, they lose all semblance of sanity.

“They are literally spewing hatred against people who refused to give in to a child’s delusional desires to mutilate himself. Can you imagine that? The moral insanity of it is shocking—well, it should be shocking, but in this upside down day where good is evil and evil is good, it isn’t anymore.

“Fact check: there is no such thing as ‘transitioning.’ No person born male will ever be a mother, will ever be a wife, will ever be a woman. And the attempt to create the myth, the appearance, involves the mutilating of a perfectly healthy body. Just the amount of chemicals introduced into the body greatly increases risks of cancer, for example. It is devastating.

“The cost involved is incredible as well. And even when this grossly unnatural, contra-nature process is completed (and it never really is, medically), the result is a damaged, non-functioning myth, not a woman. And we wonder why there is a 20 fold increase in suicides amongst those who go through this horrific, immoral, absurd process?

“So, we are supposed to hate Josh Alcorn’s parents for not allowing their minor child to do this? Why don’t we blame the ‘trans-gender mythology makers’ out there on the web who promised Josh a false make-believe panacea instead? Well, that would make moral sense, so, we can’t go there!”

One has to wonder if Dan Savage would have supported Ted Levin’s character Jame “Buffalo Bill” Gumb who only wanted to “transition” into becoming a woman. But instead of chemicals, he used the skin of real women. How could he be denied given the moral upsidedownism of sexual mutilation?

Do You Want to Guess How Ignorant These Liberals Are?

The Savagery of Dan Savage Who Savages Parents of Dead Child