A few years ago, I wrote a series of articles about Ray Comfort’s comments on Bible prophecy. You can read them here, here, here, and here. I spoke with Ray about his views on prophecy. He was receptive to my critique and told me that he would not be addressing the topic again.

It didn’t take him long to forget what he said and produce the film Noah and the Last Days (see my response here).

For some reason, Comfort’s Living Waters Site reposted a message (June 6, 2019) that he delivered in 1991 with the title “Russia Will Attack Israel.” For those of you who are counting, that’s 28 years ago. I don’t know if Ray posted it or if someone at Living Waters thought it was relevant to today’s political intrigue and posted it.

Ray Comfort does a lot of good work. His videos have a great impact. He should concentrate on evangelism, abortion, and apologetics. He is misinformed on the topic of eschatology. I’m always open to sit down with people to discuss our differences.

Ray bases his claim that Russia is prophesied in the Bible in Ezekiel 38 and 39. Most of his message is about how bad things are (or were in 1991) and how Russia is Communist and an aggressive military country. All true. He spends only a few minutes offering biblical support for his claim that Ezekiel is describing modern-day Russia.

Since ‘Russia Will Attack Israel’ and usher in the last days and everything is (was) in place for that to happen, we are left with a dismal and inevitable future. The thing of it is, prophecy writers have been using Ezek. 38 and 39 for centuries to make similar claims about what was going to happen in their day.

Harry Rimmer’s The Coming War and the Rise of Russia was also published in 1940. Hal Lindsey’s The Late Great Planet Earth included a chapter on how Russia was the Gog of Ezekiel. I have a long-playing record of a message delivered by Jack Van Impe in 1969 about “The Coming War With Russia According to the Bible: Where? When? Why?”

Russian may invade Israel, but it won’t have anything to do with Ezekiel 38-39. The prophecy describes an ancient battle fought with ancient weapons. 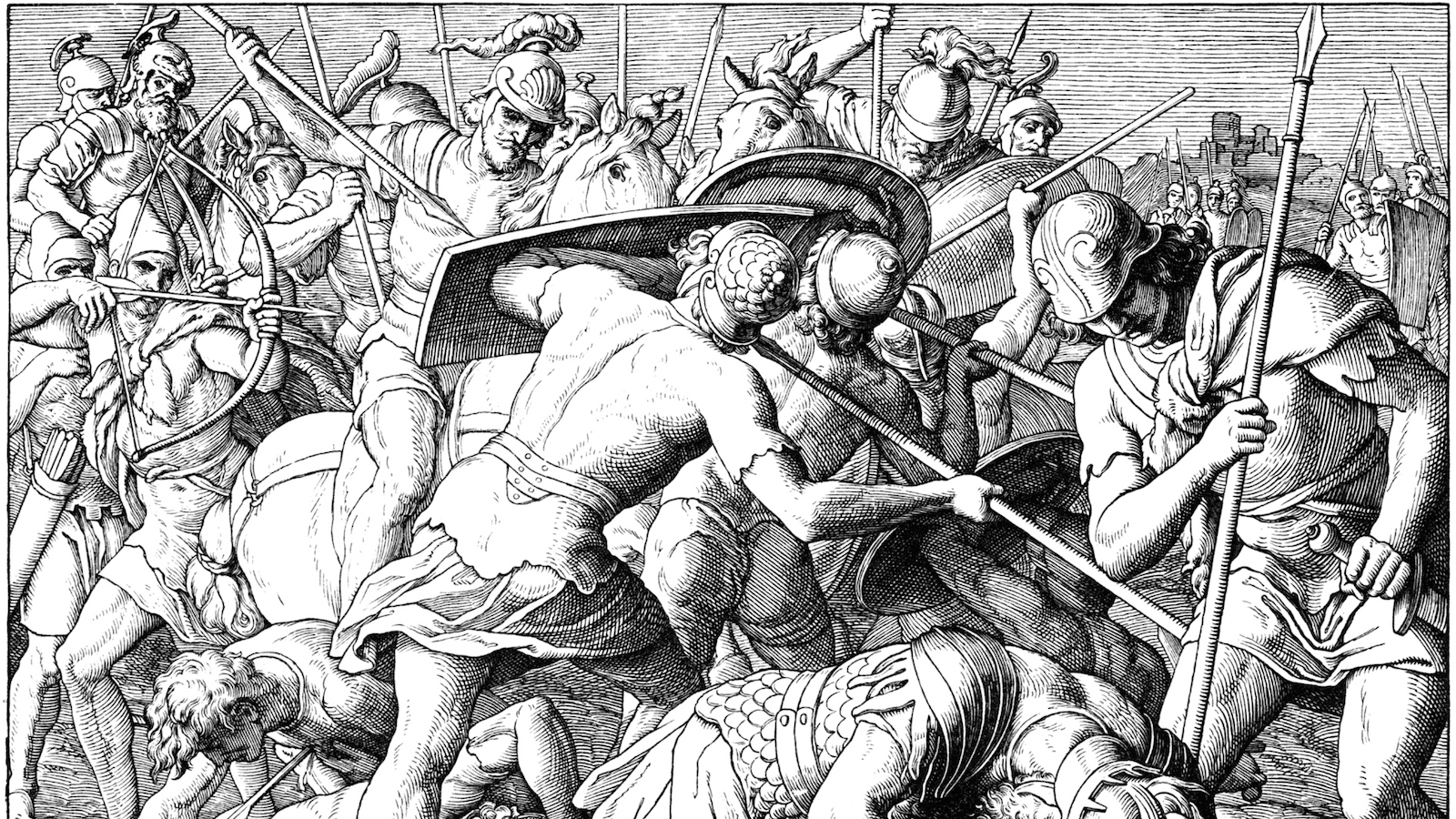 Comfort starts off quoting the KJV that reads “chief prince” (38:2, 3; 39:1) and then quotes another translation that reads “prince of Rosh,” “without a doubt,” he says, refers to “modern Russia.” (The Hebrew word rosh means “chief” or “head” and has nothing to do with Russia. More about this below.) He then quotes Smith’s Bible Dictionary, Lange’s Commentary on Ezekiel (1865-1880), and the always “authoritative” New Scofield Reference Bible for support. Ray doesn’t offer any real exegetical or historical study of the topic. He’s relying on the works of others.

For centuries, commentators have tried to figure out the “when” and “who” of the fulfillment of the prophecy. In most cases, whoever the world power was at the time became the fulfillment candidate. Here are some examples:

The following chart from Francis X. Gumerlock’s book The Day and the Hour gives you some indication of how current events influenced the interpretation of the prophecy over the centuries:

“Martin Buber’s novel For the Sake of Heaven, based on historical fact, is constructed around the conflict between the Hasidic masters on whether Napoleon was to be identified with Gog.”3

It seems that every time someone burps in the Middle East and Russia speaks, the prophecy writers go into overdrive. When nothing prophetic happens, they go back to the drawing board waiting for the next political burp.

Comfort argues that the Ezekiel prophecy is about Russia and Iran and other current Middle East players. There is no mention of either Russia or Iran in Ezekiel 38 and 39. Finding Russia is based in part on the use of the Hebrew word rosh (ראש‎), a word that’s used more than 600 times in the Old Testament and is still in use today among the Jews. Rosh does not refer to Russia. Rosh means “head” or “chief.” The first word in Genesis 1:1 includes the word rosh (בְּרֵאשִׁ֖ית): “In the beginning…” At the “head” of time.

Here are Hengstenberg’s comments on the meaning of rosh: “Gog is prince over Magog, moreover chief prince, king of the kings over Meshech and Tubal, the Moschi and Tibareni (ch. xxvii. 13, xxxii. 26), who had their own kings, but appear here as vassals of Gog. Many expositors render, instead of chief prince, prince of Rosh, Meshech, and Tubal. But the poor Russians have been here very unjustly arranged among the enemies of God’s people. Rosh, as the name of a people, does not occur in all the Old Testament.”4

The following is a list of Hebrew words where the word rosh is used.

Benjamin Netanyahu is the “head” (ראש or Prime Minister of the Israeli government as the podium shows):

Charles Ryrie, the author of the Ryrie Study Bible, acknowledges that rosh is not a proper name: “The prince of Rosh is better translated as ‘the chief prince of Meshech and Tubal.’” Ryrie, like Comfort, was a dispensationalist, but he knew his Hebrew better than Scofield or Comfort.

Lange appeals to the Hebrew lexicographer Wilhelm Gesenius (1786-1842) but does not interact with other Hebrew scholars who disagreed with him in his day. I interact with Gesenius’ arguments in my book The Gog and Magog End-Time Alliance.

Daniel I. Block translates Ezekiel 38:3, “[Son of Man], set your face toward Gog, of the land of Magog, the prince, chief of Meshech and Tubal.”5 Here is Block’s explanation:

[Rosh] is therefore best understood as a common noun, appositional to and offering a closer definition of [the Hebrew word] nasi [translated as “prince”]. Accordingly, the prince, chief of Meshech and Tubal, combines Ezekiel’s preferred title for kings with a hierarchical designation, the addition serving to clarify the preceding archaic term.6

Then there’s the problem with the weapons used in this supposed end-time war with Israel. They are ancient weapons: bows and arrows, spears, clubs, shields (Ezek. 39:9) and chariots (39:20). The claim is often made that God was revealing modern-day weaponry in terms that Ezekiel and the people of his day could understand. Bows and arrows are said to be missiles and rocket launchers. Horses are “horsepower.” Chariots are tanks. All of this from interpreters who claim to interpret the Bible literally. Following this methodology, the people of Ezekiel’s day and our day are left to speculate.

Dispensationalists insist on interpreting prophecy literally, but not when it comes to Ezekiel 38 and 39.

I have a Christian friend who was a Green Beret in Viet Nam. When he first read this chapter he said, ‘I know what those are. I’ve seen hundreds of them in Viet Nam. They’re Cobra helicopters! That may be conjecture, but it does give you something to think about! A Cobra helicopter does fit the sound of “many chariots.” My friend believes that the means of torment will be a kind of nerve gas sprayed from its tail.7

The way the so-called literalists like Lindsey and Comfort interpret the prophecy, confuses everyone, the people in Ezekiel’s day and our day.

Sheba and Dedan and the merchants of Tarshish with all its villages will say to you, “Have you come to capture spoil? Have you assembled your company to seize plunder, to carry away silver and gold, to take away cattle and goods, to capture great spoil?”

He claims this passage refers to modern-day Israel. But Comfort says that Russia is after oil. Russia is one of the largest producers of gold. Why would Russia go all the way to Israel for cattle? The following is a description of the spoils the Israelites brought back from their period of captivity among the Babylonians and Medes and Persians:

Every survivor, at whatever place he may live, let the men of that place support him with silver and gold, with goods and cattle, together with a freewill offering for the house of God which is in Jerusalem (Ezra 1:4).

This shows that the events of Ezekiel 38 and 39 refer to that time, not ours.

Notice that the Ezekiel prophecy describes a time when there were “unwalled villages” (Ezek. 38:11). Comfort mentions this. Today, Israel is a nation of walls. In the book of Esther, we see that there were Jews who were living in relative peace in “unwalled towns” (Esther 9:19, KJV) when Haman conspired against them. The Hebrew word perazah is used in Esther 9:19 and Ezekiel 38:11. It’s unfortunate that the translators of the New American Standard Version translate perazah as “rural towns” in Esther 9:19 instead of “unwalled villages” as they do in Ezekiel 38:11.

There’s much more I could say about this topic. See my book The Gog and Magog End-Time Alliance. I guarantee that it will blow you away.

It’s obvious that Ezekiel is describing a future battle that was in Israel’s near future about 2500 years ago. The most likely fulfillment are the events surrounding the book of Esther. This often neglected book is filled with parallels to Ezekiel 38 and 39 another Old Covenant passages.

“One late manuscript to Esther 3:1 and 9:24 refers to Haman as a ‘Gogite.’”8 Haman wanted to “destroy all the Jews, the people of Mordecai, who were throughout the whole kingdom of Ahasuerus” (Esther 3:6) but failed in the attempt. Haman (Esther 7) and his sons (9:10) were executed and the Jews rebuilt the temple and were reestablished as God’s covenant people. Even Haman’s name is mentioned in Ezekiel 39.

Are There Verses in the Bible that Support Abortion?