A Political Cartoon that Explains it All

President Obama has done more damage to the Constitution than any president in history. It’s not that other presidents haven’t tried to subvert the Constitution. In fact, a case could be made that nearly every president has in some way violated his oath of office.

But Obama’s presidency is different. He’s upfront about what he has done and what he wants to do and does seem to care about the consequences of his actions. He has a willing party, an obliging media, and a weak-kneed opposition party.

Conservatives are catching on. Here’s a good example, drawn by Ben Garrison: 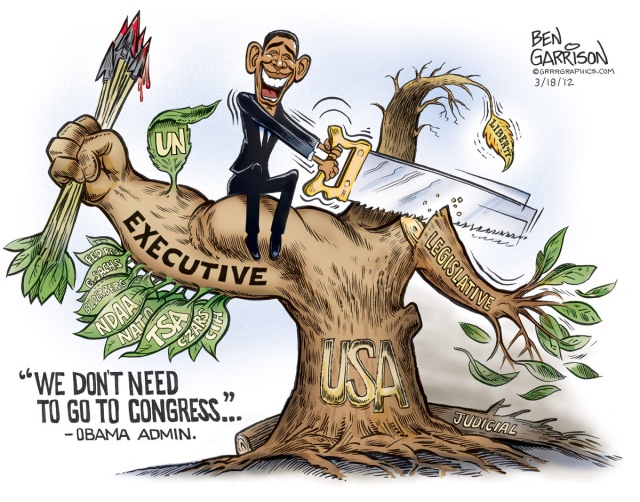 Trending: A Case for Christian Resistance in Anticipation of the Pro-Same-Sex Marriage Decision

It’s been said that a picture is worth a thousand words.

We are an image-driven culture. Liberals learned this a long time again. That’s why Hollywood and the film industry were vehicles used by people who wanted to change culture and create a new culture in their own image. More people can be reached by film, television, art, and music then with tightly reasoned arguments in books and papers. It’s not that these aren’t important and needed; it’s that more needs to be done to reach the masses.

It’s going to take a long time to compete in the area of film. But it’s happening. talk to Dinesh D’Souza. His film “2016: Obama’s America” put him on Obama’s “Most wanted List.” It hasn’t stopped him. Wait to you see his next film: “America.”

With the internet celebrating its 25th anniversary, the media gatekeepers are not longer able to guard the gates of information. Dr. Gary North writes:

“The Web is overcoming the Left. It is delivering information to customers and their servants, profit-seeking corporations. It is making it difficult for the government’s bureaucrats to hide. Even Diane Feinstein is slowly catching on.

“The mainstream media are fading in importance. They are being pushed out into the “long tail.” Matt Drudge has more leverage than any television network — surely more than CNN and MSNBC combined. The public has spoken.

“It will continue to speak.”

It’s not enough to vote, although that’s important; every area of life must be engaged. We can’t change just one thing.

The Religion of Sagan’s ‘Cosmos’ Has Come Back to Television

Property Rights For Me but not for Thee

A Political Cartoon that Explains it All