Pennsylvania Town Wants to Outlaw the Right to Choose

No, I’m not talking about abortion. I’m talking about businesses that are being harassed by liberal ideologues who want to force their belief system on anybody they disagree with on what topic.

Liberals love freedom of choice when it comes to killing unborn babies, but try proposing school choice and choice of association.

Most recently, the Christian owners of a bridal shop who refused to supply wedding dresses for lesbian brides were harassed on social media. Now the town of Bloomsburg, Pennsylvania, is considering passing a law that would make it illegal for a business to refuse to serve same-sex couples as same-sex couples.1

The Bloomsburg website has as one of its slogans, “A Great Place to Start or Grow a Business.” Tell that to Victoria and Thomas Miller, owners of the W.W. Bridal Boutique. 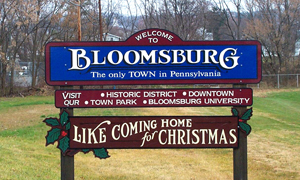 “The gay and lesbian community has won a hard-fought battle to protect their liberty and rights to pursue happiness,” Miller said. “But, does that give gay activists the right to take our liberty and to restrain our right to pursue our religious faith as we see fit?”

It’s a simple question that deserves a simple answer. No.

We saw a similar thing happen to Masterpiece Cakeshop owner Jack Phillips who refused to make a wedding cake for a same-sex couple and a photographer who declined a request to photograph a same-sex wedding. Prosecutions followed.

In both cases they were fined, but in the case of the baker, he and his employers were ordered to “get their minds right” by attending sensitivity training classes.

Jack Phillips’s lawyer put the controversy into perspective with this analogy:

“I would pose this question to the admin law judge or the tribunal — ‘Is this commission prepared to force a pacifist to paint a mural for a disabled U.S. veteran honoring whatever war he or she fought in and is disabled because of?’,” she asked. “Are we to force that painter to paint a mural celebrating [war]?”

These laws are selective in their administration and application since business owners refuse to do business with other businesses and customers for all types of reasons and there are no legal repercussions, and there shouldn’t be. The new law would only be narrowly applied:

“The town’s Community and Economic Development Committee (CEDC) has now begun meetings to review the proposal, brought by gay activist and Democrat State Committee member Dwayne Heisler and his supporters, for an ordinance that would specifically ban businesses in the town from discriminating against LGBT customers.”

What if a KKK couple wanted to get married at a wedding venue where the bride and groom and their attendants dress up in hooded sheets? Would it be illegal to deny them?

Only the LGBTQ+ are protected by these laws.

Media Pushing New Gay ‘Victim’ Who Comes Out to His Family

This Mongoose Will Show the GOP How to Beat Liberals

Pennsylvania Town Wants to Outlaw the Right to Choose