A lot has changed in 50 years, and it’s not just the absence of American flags at the latest Selma march.

A picture comparing the two marches — 1965 and 2015 — are helpful in understanding what’s happened with race relations in 50 years.

It’s no longer about “civil rights”; it’s about “gay rights” and abortion rights. Conservative black leaders are calling President Obama’s comparison “of homosexual activism to the 1965 Selma to Montgomery civil rights march ‘ridiculous’ and ‘an insult.’”

America is no longer viewed as exceptional, and any exceptionalism that’s left in her Obama and his fellow-“Progressives” will make sure is squeezed out.

Jesse Peterson of The Brotherhood Organization of a New Destiny (BOND) had this to say about President Obama’s comments:

There was no hope in that rally. Just think about this: 50 years later we have a black president in the United States of America. This country has done more than any other country to make amends for slavery in this country and yet there was no appreciation of that. There was no praise of America, thanking America for what it had done. It was as though it was still 1955.

Take a look at the image below. Notice the number of American flags in the 1965 march. Compare it to the 50th-anniversary march. 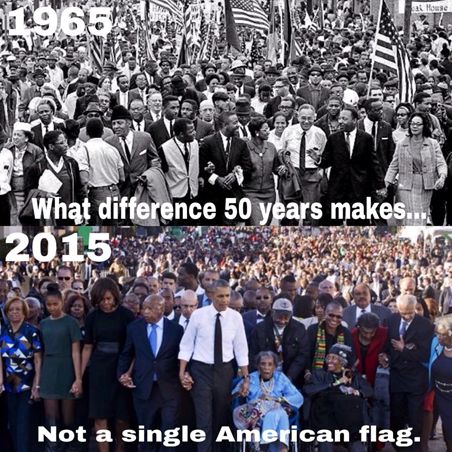 Melissa Harris-Perry put a new spin on the 50-year “Bloody Sunday” remembrance march by making it about abortion:

“Stressing Planned Parenthood’s ‘enormous contingent’ present, she said they marched ‘because they believe that reproductive rights continue to be threatened.’ Describing the scene, Harris-Perry said, ‘This is truly motivated by what the president has called, and, of course, in quoting Martin Luther King, Jr., ‘the fierce urgency of now.’”

“’There is a sense in this crowd that what people are here marching for are issues that are on the table right now,’ Harris-Perry said as Planned Parenthood supporters stood behind her in pink shirts. ‘We saw an enormous contingent of Planned Parenthood go past, folks who are clearly out here, marching because they believe that reproductive rights continue to be threatened in this country, and particularly in the South.’”

A higher percentage of blacks get abortions than whites. A number of blacks have called this “black genocide.”

Harris-Perry is at war with her own race through legal and medical lynching. Not just a “Bloody Sunday,” but a bloody every day of the week for blacks in America as so-called black leaders remain silent.

3 Meals a Day is Racist and So is Everything Else