If the worst the left can find on Marco Rubio is some traffic tickets, he’s in good shape. When liberals tried to find something on Mitt Romney, they went all the way back to his high school days – 50 years ago — and some hair-cutting incident. I know, it was shocking.

The Washington Post made it out to be as a bad as bringing a gun to school:

“If such an attack happened in the public schools of 2012, it would probably lead to suspension and might also be referred for expulsion, a number of local school leaders said following a Washington Post report of the incident involving Romney.

“A call to police would probably also be in order because it would be considered an assault, said Alan Goodwin, principal of Walt Whitman High School in Bethesda.”

The left is not interested in ISIS in America, the IRS going after conservative political groups, Hillary Clinton’s hidden emails, the Clinton Foundation’s collusion with foreign governments, or Hillary’s enabling of her husband’s sexual escapades. No, the left is trying to smear a Republican presidential candidate because he “got four tickets for speeding or breaking other traffic laws over 18 years in Miami-Dade and Duval Counties.”

One person posted this on Twitter: “How the hell has @marcorubio managed to get only 4 tickets in 18 yrs driving in Miami?”

How many people remember Barack Obama who only paid his long overdue 17 parking tickets when he decided to run for President?

“Democratic presidential candidate Barack Obama got more than an education when he attended Harvard Law School in the late 1980s. He also got a healthy stack of parking tickets, most of which he never paid.

“The Illinois Senator shelled out $375 in January — two weeks before he officially launched his presidential campaign [in 2007] — to finally pay for 15 outstanding parking tickets and their associated late fees.”

Obama was just sticking it to the man. At least Rubio paid his fines on time.

Hillary Clinton can’t get any tickets because she hasn’t driven a car for 30 years.

There’s one more liberal icon who received a traffic citation. It was Sen. Edward Kennedy who “pleaded guilty to a charge of leaving the scene of an accident after causing injury” in the death of Mary Jo Kopechne on July 18, 1969.

At the time of the accident, the Senior Senator from Massachusetts was driving with an expired driver’s license. This would have been enough to prove negligence and bring a criminal charge against him. But the charge was never made. Somehow the expired license “problem” had been “fixed” by the Department of Motor Vehicles.

He left the scene of the accident, passed homes with their lights on as he made his way back to his hotel, did not immediately report the accident, and two fishermen reported the submerged car at 8:20 the next morning. A diver was brought in, and Kopechne’s body was discovered around 8:45 AM.

The diver, John Farrar, later testified at the inquest that Mary Jo Kopechne’s body was pressed up in the car in the spot where an air bubble would have formed. He interpreted this to mean that Kopechne had survived for a time after the initial accident in the air bubble, and concluded:

“Had I received a call within five to ten minutes of the accident occurring, and was able, as I was the following morning, to be at the victim’s side within twenty-five minutes of receiving the call, in such event there is a strong possibility that she would have been alive on removal from the submerged car.” 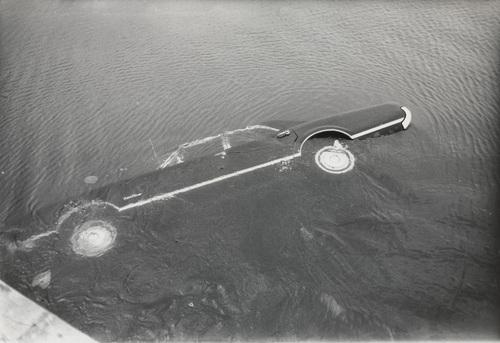 Farrar believed that Kopechne “lived for at least two hours down there.”

So what’s important to liberal “journalists”? Four traffic violations over a period of 18 years in which no one was killed or injured.

Florida police officers write more than 4 million traffic tickets each year, and I bet not one of them was for a U.S. Senator leaving the scene of an accident where a young girl was left to drown.

Liberals Prove they are Anti-Science