Gutzon Borglum was the artistic genius and drive behind the Mount Rushmore sculpture in the Black Hills of South Dakota:

Artist and sculptor Gutzon Borglum said the monument would cost $500,000 and take three years to carve. But thanks to the Depression, World War II and some bad rock, the project would take 14 years – from 1927 to 1941 – and cost over $1 million. Back in 1941, that was the equivalent over $17 million today.

It’s awe-inspiring to think that 400 people could accomplish such a titanic feat using primarily dynamite to move about 450,000 tons of rock. (Fox News)

In addition to the heads of past Presidents, Gutzon wanted to include an entablature to be placed alongside the four presidents. It would have been inscribed with a brief history of the United States. Without it the monument would have about as much meaning to future generations as the heads on Easter Island have for us today. “You might as well drop a letter in the postal system without an address or signature,” Borglum wrote, “as to send that carved mountain into the future without identification.”

Gutzon had planned a Hall of Records to be carved into the interior of the mountain. It was never completed.

The original plans for Mount Rushmore’s Hall of Records as conceived by Gutzon Borglum.

Borglum wanted Calvin Coolidge to write the 500-word history. After the president submitted his draft, Borglum made so many editorial changes that Coolidge withdrew his support for the project. In time, interest in the project waned. In 1934, a year after Coolidge’s death, the project was revived with the entry of William Randolf Hearst and his newspaper chain and an essay contest. The contest was sponsored by Hearst where the five million readers of his newspapers had a chance to write the historical inscription and have their words immortalized in stone on Mount Rushmore. President Franklin Roosevelt accepted Borglum’s invitation to head a judging committee that included Eleanor Roosevelt, Interior Secretary Harold Ickes, and other notable Americans. The contest was extremely popular. More than 100,000 entries were submitted. The Great Depression and the advent of World War II put a halt to the project.

The submission by a young Nebraskan named William Andrew Burkett won the college-age category. Burkett’s entry won him a four-year college scholarship. He claimed he owed his good fortune to winning the contest.

In an early photograph of the initial work of the project, you can see the date “1776” which was to have been the start of the 500-word inscription. It was later blasted away to make room for the head of Abraham Lincoln. 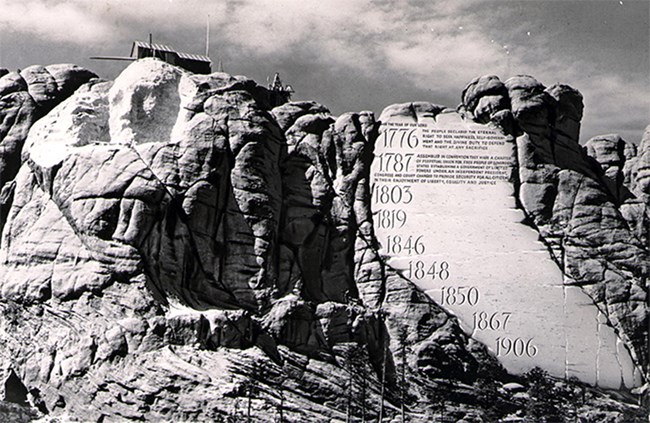 Eventually, Burkett’s essay was inscribed on a bronze tablet and installed at Rushmore in 1975 (see below). It reads as follows:

Almighty God, from this pulpit of stone the American people render thanksgiving and praise for the new era of civilization brought forth upon this continent. Centuries of tyrannical oppression sent to these shores, God-fearing men to seek in freedom the guidance of the benevolent hand in the progress toward wisdom, goodness toward men, and piety toward God.

Consequently, on July 4, 1776, our forefathers promulgated a principle never before successfully asserted, that life, liberty, equality, and pursuit of happiness were the birthrights of all mankind. In this declaration of independence beat a heart for all humanity. It declared this country free from British rule and announced the inalienable sovereignty of the people. Freedom’s soldiers victoriously consecrated this land with their life’s blood to be free forever more.

Then, in 1787, for the first time a government was formed that derived its just powers from the consent of the governed. General Washington and representatives from the 13 states formed this sacred Constitution, which embodies our faith in God and in mankind by giving equal participation in government to all citizens, distributing that powers of governing, threefold securing freedom of speech and of the press, establishing the right to worship the Infinite according to conscience, and assuring this nation’s general welfare against an embattled world. This chart of national guidance has for more than 150 years weathered the ravages of time. Its supreme trial came under the pressure of civil war, 1861–65. The deadly doctrines of secession and slavery were then purged away in blood. The seal of the Union’s finality set by President Lincoln, was accomplished like all our triumphs of law and humanity, through the wisdom and the power of an honest, Christian heart. Far-sighted American statesmanship acquired by treaties, vast wilderness territories, where progressive, adventurous Americans spread civilization and Christianity.

In 1803, Louisiana was purchased from France. This acquisition extended from the Mississippi River, across the fertile prairie to the Rocky mountains, and paved the way for America’s pre-eminence among the nations.

In 1819, the picturesque Florida peninsula was ceded as payment of Spanish obligations due to Americans.

In 1845, Texas, having patterned American democracy during the 10 years of freedom from Mexican rule, accepted the invitation to join the sisterhood of states. In 1846, the Oregon country was peacefully apportioned by the 49th parallel as the compromised international boundary of the two English-speaking nations.

In 1848, California and territory likewise rich in natural resources were acquired as the consequence of an inevitable conflict with Mexico. In spirit of mutual concession, the United States granted additional indemnities for the adjustment of the international boundary, extending from the Rio Grande to the Gulf of California.

In 1867, Alaska was purchased from Russia.

In 1904, the Panama Canal Zone was acquired for our people to build a navigable highway enabling the world’s people to share the fruits of the earth and of human industry.

Now, these eras are welded into a nation possessing unity, liberty, power, integrity and faith in God, with responsible development of character and devoted to the performance of humanitarian duty. Holding no fear of the economic and political, chaotic clouds hovering over the earth, the consecrated Americans dedicate this nation before God, to exalt righteousness and to maintain mankind’s constituted liberties so long as the earth shall endure. 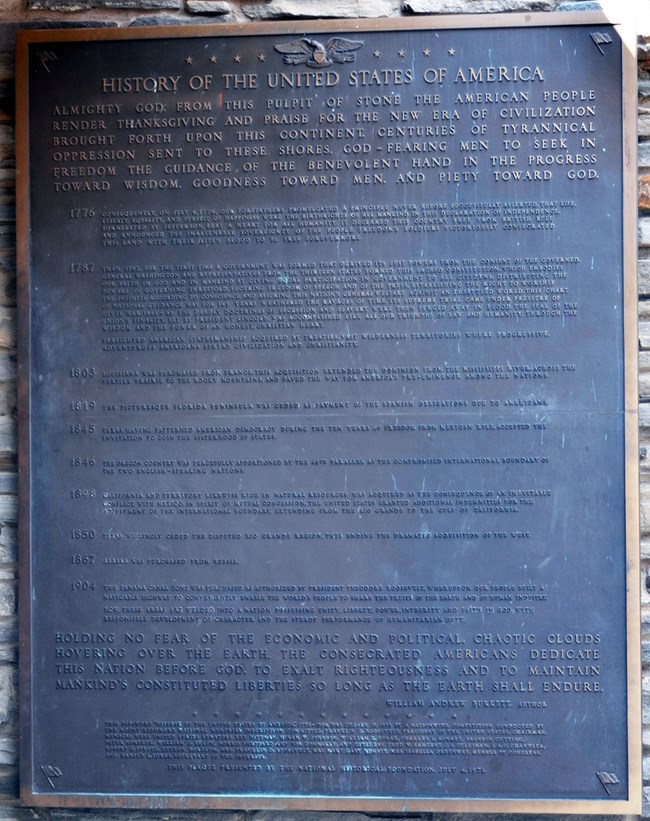