Lottery fever hit big a few weeks ago. The last jackpot was more than $1.5 billion. Of course, the government will get its multi-millions. That’s what it’s really all about: people voluntarily giving their money away to the government.

Yes, a few people will make millions, but the government will get money it would not have gotten otherwise.

You may have seen this meme that I hope someone put together as a joke:

I suspect that there are enough people out there who would support the idea of giving every American millions of dollars. If the government can stimulated the economy through Quantitative Easing which has made people rich through the rise in stock prices, why not make everyone rich buy giving them the money directly? 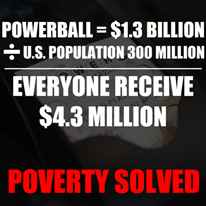 If everyone had $4.3 million, the economy would collapse. Who would go to work? Who would drive trucks, grow food, drill for natural gas and oil, build cars, etc.?

Of course, with that much money chasing a limited number of goods and services, prices would skyrocket based on the economic law of supply and demand, an economic law that socialists, communists, Democrats, Bernie Sanders, and Keynesians either don’t believe exists, or if they do believe it exists contend that it can be broken for the greater good.

After everything that could be purchased was purchased, there wouldn’t be anything left to buy. That $4.3 billion would be worthless.

If you took all the money from every person in one year and redistributed it so everyone had the same amount of money, there wouldn’t be anything to redistribute in the next year. In that second year, why would anyone want to work hard to make money if he or she knew that their earnings would be taken away and given to people who figured they do not have to work to get a paycheck?

“The experience that we had in this common course and condition, tried sundry years . . . that by taking away property, and bringing community into a common wealth, would make them happy and flourishing — as if they were wiser than God.

After the utter failure of the “let’s all be equal” in an attempt to eliminate economic disparity, private property and industry were restored. “This [free enterprise] had very good success, for it made all hands industrious, so as much more corn was planted than otherwise would have been.”

Not only is Socialism immoral; it doesn’t work no matter how good or bad your math is.

How a Radical Muslim "Natural Born Citizen" Could Be President