If there’s one thing that Christians get upset about is a disagreement over some of their cherished beliefs they think are found in the Bible. The belief that Christians are going to be taken off the earth prior to a Great Tribulation has been a big part of evangelicalism for decades. What many Christians do not know is that it’s a relatively new belief system developed around 1830.

As popular a belief as it’s been, there is very little (if any) biblical evidence for the position.. (See my article Why Left Behind is Not Biblical.) It’s not that Christians will not suffer tribulation. Jesus made it clear that if people persecuted Him, they would persecute His followers (John 15;20).

In another place, Jesus said:

“These things I have spoken to you, so that in Me you may have peace. In the world you have tribulation, but take courage; I have overcome the world” (John 16;30).

The Great Tribulation that Jesus was speaking about on the Mount of Olives (Matt. 24; mark 13; Luke 21) was in reference to what was going to happen to the temple and the city of Jerusalem before that generation passed away.

This prophecy was fulfilled in exacting detail in the events leading up to and including the destruction of Jerusalem in AD 70. (See my books Last Days Madness and Is Jesus Coming Soon? and my video series Basic Training for Understanding Bible Prophecy.)

for a comprehensive defense of this interpretation.)

It’s been my contention that a preoccupation with the end times has given liberalism its strong foothold in our culture.

America never would have happened if the early settlers to America had adopted a Left Behind theology.

Ben Kayser’s “Dear Christians. . . Please Don’t Leave Us Behind is a helpful antidote to Left Behind mania.

Last weekend, LEFT BEHIND brought in only $6.3 million. Considering its bloated budget of $15 million dollars, not including its costly marketing campaign, it’s no secret that this is a blow to the faith-based movie market, along with other recent box office bombs.

There’s multiple reasons SON OF GOD, GOD’S NOT DEAD and HEAVEN IS FOR REAL left Nicolas Cage and his co-stars behind in box-office failure. Lack of quality storytelling and poor marketing are just a few of those reasons (Cage’s performance actually gave the movie the little authenticity it had). At a deeper level, LEFT BEHIND no longer resonates with Christians because I believe most Christians today are not praying to leave this world behind.

Christian Millennials want to make a difference, and many of them are. Not just by reaching people with the gospel, but by actually seeking to live their faith out in the world. Regardless of your eschatology, there is a simple fact that no one can deny, and that LEFT BEHIND clearly ignores. God calls every Christian to live on mission for Christ. LEFT BEHIND shows two polar opposites of Christians living out their faith. There is the frustrating believer stating “The End is Near” and then you have the incognito Christian who’s only proof of faith was the cross necklace they left behind. Neither is optimal or useful for changing the world. 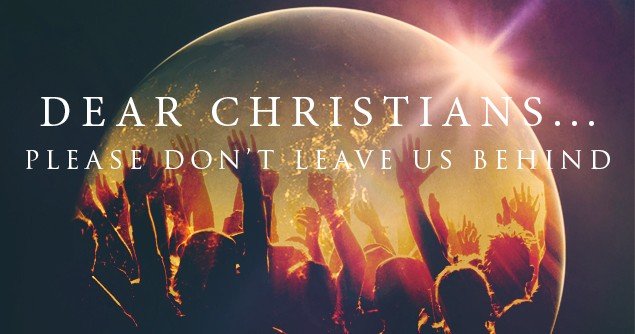 God’s story doesn’t end in defeat: it ends in redemption. He calls us to pray that God’s Kingdom would come, on earth as it is in Heaven, and he accomplishes this through us. Though we suffer attacks, failures, and persecution, God reminds us that the gates of hell will not prevail against the church. The last thing this culture needs is a Christian church waiting to be raptured. The last thing this hurting world needs is believers so focused on the end that they don’t even see the beginning of great things to come. The truth is, the world falls apart when Christians leave it behind.

Every day, I see young impassioned boys and girls stand up to put an end to human trafficking.

Every day, I hear stories of young people giving their all to stop poverty.

Every day, I see new artists and storytellers enthusiastically share the hope of the gospel through their craft.

Every church I see planted and every life I see made new is a reminder that God isn’t done with this world yet.

I often hear the prayer, “Jesus, please come soon.” Have we forgotten that Jesus already promised in Matthew 28, “Behold, I am with you always, to the end of the age.”

Jesus will return one day, but we don’t have to wait to be with Him. God is working in and through us so we can go out and make a difference.

LEFT BEHIND asks the important question, “Are you ready?,” but I’d like to make an addition.

Are you ready to see God do amazing things in this country and around the world?

Are you ready to see God’s kingdom come on earth as it is in heaven?

Are you ready to leave fear and hopelessness behind?

Are you ready to join us in this mission?

Gwyneth Paltrow Wants Obama to be Her Personal Fascist Dictator