The “Jesus Was a Socialist” Meme and Lie

“If Jesus had been born 30 years ago, Fox News and the Republican Party would label him a dangerous Middle Eastern man who wants to impose socialism on the world and enable the poor.”

The above meme is making its way around Facebook. The last time I checked, it’s not Jews who are beheading Christians, setting fire to churches, kidnapping and killing Christian school children, engaged in “honor killings,” throwing acid in the face of women, flying passenger planes into buildings, etc.

It’s the socialism claim that mostly caught my attention. The poor are enabled when the market place is free from oppressive regulation, taxes are low, the government is severely limited.

This isn’t the first time someone has tried to equate New Testament social theory with modern-day socialism in an attempt to turn Jesus into an advocate of wealth confiscation and redistribution.

Jesus said that He did not come to “abolish the law and the prophets” (Matt. 5:17). One of those laws is “You shall not steal” (Ex. 20:15), even if a majority of people vote for stealing. Socialism is the transfer of wealth from some people to other people by force. Neither Jesus in particular nor the Bible generally advocates for such a system. 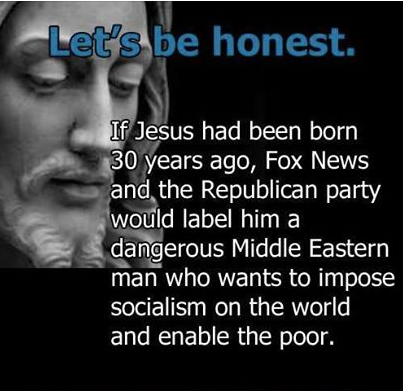 Gleaning in the Old Testament was a way to help the poor. Even the poorest members of society had to work (Lev. 19:9-10; 23:22; Deut. 24:20-22). Jesus and his disciples practiced a form of gleaning as they walked through grain fields breaking off heads of wheat to eat (Mark 2:23). Gleaning was hard work, and it was not a government program.

It’s true that Jesus did say that we should care for “the least of these” (Matt. 25:40). Who are the “these”? The context makes it clear that Jesus’ scope is limited to “these brothers of Mine.” As we’ll see, Jesus expands on those we are to help.

Note that there is no mention of government programs, legislation, or mandates. The directive is aimed at individuals, not faceless and nameless bureaucrats. Certainly Rome had the power to tax (Luke 2:1; Matt. 22:15–22), and yet Jesus never petitions the Empire to force people to pay their “fair share” in the development of a welfare State. Jesus believed in limited government.

The Good Samaritan is an example of how aid should be handled. The Samaritan took care of the “half dead” man out of his own pocket. He “bandaged up his wounds, pouring oil and wine on them; and he put him on his own beast, and brought him to an inn. . . .” And “the next day he took out two denarii and gave them to the innkeeper and said, ‘Take care of him; and whatever more you spend, when I return I will repay you’” (Luke 10:30–37).

Even the story of the Rich Young Ruler is not about socialism (Mark 10:17–27). Jesus didn’t use the example of the rich man strangled by his wealth to appeal to Rome to tax the rich so the poor will benefit. If that had been Jesus’ objective, then why didn’t He say the same thing to Joseph of Arimathea who is described as a “rich man” (Matt. 27:57; Mark 15:43)?

Appeal cannot be made to Acts 2:44–45 and 4:32–37. These early Christians voluntarily sold their property and used the proceeds to help those in need. Neither the Empire nor the Church had any role in the sale of the property.

“No one was forced into giving up his goods and possessions. It was not socialism legislated either by church or state. It does not resemble modern communism in any respect. . . . Ananais was free to keep or sell his property. When he sold it, he had the right to determine whether he would give all of it, or part of it, or none of it, into the treasury of the church for the alleviation of the needs of poor Christians. J. W. Lipscomb is certainly correct when he says, ‘The program was a voluntary expression of Christian concern for the needs of fellow Christians, and was not a program for compulsory collectivism such as we hear advocated all too often today.’”1

Paul writes in his first epistle to the Thessalonians:

“But we urge you, brethren, to excel still more, and to make it your ambition to lead a quiet life and attend to your own business and work with your hands, just as we commanded you, so that you will behave properly toward outsiders and not be in any need” (1 Thess. 4:10-12).

“The experience that we had in this common course and condition, tried sundry years . . . that by taking away property, and bringing community into a common wealth, would make them happy and flourishing – as if they were wiser than God.”

Not only is Socialism immoral; it doesn’t work.

The “Jesus Was a Socialist” Meme and Lie