Communism is in vogue. “A new survey released by the Washington, D.C., nonprofit Victims of Communism Memorial Foundation reflects that, if the younger generation gets out and votes in 2020, those running for office on the far left have reason to be hopeful.” This finding is based on “historical amnesia.” I think it’s worse than amnesia. To have amnesia is to know something to forget. I suspect that most young people today have never studied the effects of Communism.

Marion Smith, executive director of the Victims of Communism Memorial Foundation, says he’s troubled by the findings of the poll. “When we don’t educate our youngest generations about the historical truth of 100 million victims murdered at the hands of communist regimes over the past century,” he said, “we shouldn’t be surprised at their willingness to embrace Marxist ideas.”

What’s even sadder is that many people believe the Bible teaches a Communist economic system.

Recently I came across an article with the title, “Are Christians Supposed to Be Communists?” The author doesn’t answer his own question. He and others do claim that the Christians lived in “community.” Of course, that’s not the same thing as Communism, is it? The article’s author begins with this opening paragraph:

It was in 1983 that I heard the distinguished Greek Orthodox historian Aristeides Papadakis casually remark in a lecture at the University of Maryland that the earliest Christians were “communists.” In those days, the Cold War was still casting its great glacial shadow across the cultural landscape, and so enough of a murmur of consternation rippled through the room that Professor Papadakis — who always spoke with severe precision — felt obliged to explain that he meant this in the barest technical sense: They lived a common life and voluntarily enjoyed a community of possessions. The murmur subsided, though not necessarily the disquiet.

This isn’t the first time someone has tried to equate New Testament social theory with modern-day socialism or Communism so as to turn Jesus into an advocate for wealth confiscation and redistribution by the State.

Filmmaker and multimillionaire Michael Moore says “being a Christian is the ‘same thing’ as being a socialist…. ‘It’s all about making sure everyone has a seat at the table and the pie is divided so that everybody gets a slice,’ Moore added. ‘Isn’t that what Christianity is? That’s what she’s about.’” (The Blaze) And who does the dividing? On whose authority is the dividing based?

During Jesus’ earthly ministry, the apostles lived as a small group community. Jesus didn’t call everyone to join Him. There was no call for everyone to sell everything and live in either a voluntary or forced community.

“You shall not steal” is a fundamental biblical commandment. It’s found in both Testaments and applies to more than wealth (Ex. 20:15; 21:16; Lev. 19:11, 13; Matt. 19:18; Rom. 13:9). Paul writes, “He who steals must steal no longer; but rather he must labor, performing with his own hands what is good, so that he will have something to share with one who has need” (Eph. 4:28). Sharing is an act of charity. Forced sharing is stealing, even when governments do it and the people vote for it.

Socialism is the transfer of wealth from some people to other people by force in order to equalize income. Communism is a lot worse. Each social theory operates by force:

To answer the claim, neither Jesus nor the Bible generally advocates for either system.

Gleaning in the Old Testament was a way to help the poor. Even the poorest members of society had to work (Lev. 19:9-10; 23:22; Deut. 24:20-22). Jesus and his disciples practiced a form of gleaning as they walked through grain fields breaking off heads of wheat to eat (Mark 2:23). Gleaning was hard work, and it was not a government program. 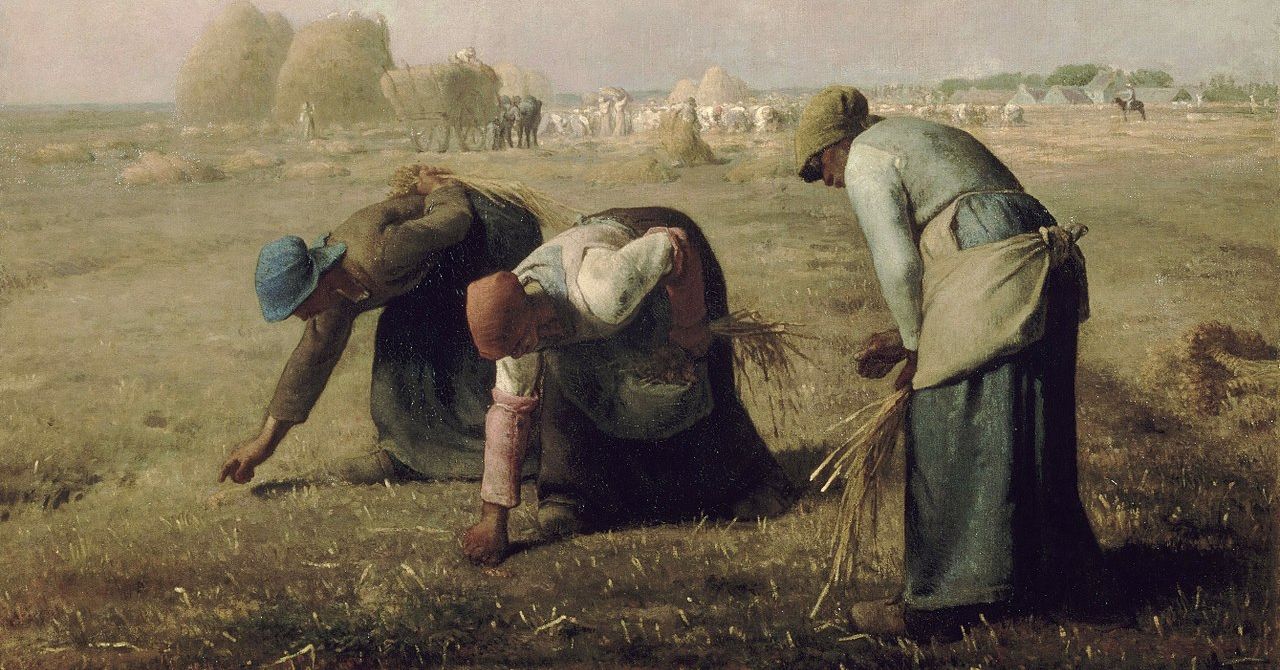 The Gleaners by Jean-François Millet, 1857.

It’s true that Jesus did say that we should care for “the least of these” (Matt. 25:40). Who are the “these”? The context makes it clear that Jesus’ limits the scope to “these brothers of Mine.”

Note that there is no mention of government programs, legislation, or mandates. The directive is aimed at individuals, not faceless and nameless bureaucrats. Certainly, Rome had the power to tax (Luke 2:1; Matt. 22:15–22), and yet Jesus never petitions the Empire to force people to pay their “fair share” in the development of a welfare State. Jesus believed in limited government.

The Good Samaritan is an example of how aid should be handled. The Samaritan took care of the “half-dead” man out of his own pocket. He “bandaged up his wounds, pouring oil and wine on them; and he put him on his own beast, and brought him to an inn….” And “the next day he took out two denarii and gave them to the innkeeper and said, ‘Take care of him; and whatever more you spend, when I return I will repay you’” (Luke 10:30–37).

Even the story of the Rich Young Ruler is not about socialism (Mark 10:17–27). Jesus didn’t use the example of the rich man strangled by his wealth to appeal to Rome to tax the rich so the poor will benefit. A case can be made that the “ruler” (archon) was part of the ruling class and was using his governmental role to defraud people to enhance his wealth and power. It happens all the time. “He was a ruler, a man of the state. It is odd, Jerry Bowyer writes, “to see people who want to increase the power of rulers invoke Jesus’ commentary against a ruler.” If it had been Jesus’ objective to advocate for wealth redistribution, then why didn’t He say the same thing to Joseph of Arimathea who the Bible describes as a “rich man” (Matt. 27:57; Mark 15:43)?

An appeal to Acts 2:44–45 and 4:32–37 does not support the redistributive claim made by socialists and communists that the Bible supports their ideologies. These early Christians voluntarily sold some of their property and used the proceeds to help those in need. Neither the Roman Empire nor the Church had any role in the sale of the property. Their action is confined to Jerusalem and may be related to Jesus’ prophecy about the coming destruction of the temple and the judgment on Jerusalem before their generation passed away (Matt. 24:2-3, 34). Before long, their property would lose considerable value.

No one was forced into giving up his goods and possessions. It was not socialism legislated either by church or state. It does not resemble modern communism in any respect…. Ananias was free to keep or sell his property. When he sold it, he had the right to determine whether he would give all of it, or part of it, or none of it, into the treasury of the church for the alleviation of the needs of poor Christians. J. W. Lipscomb is certainly correct when he says, “The program was a voluntary expression of Christian concern for the needs of fellow Christians and was not a program for compulsory collectivism such as we hear advocated all too often today.”1

Repeated attempts at a socialistic economic system have been tried and found wanting.

The Pilgrims initially organized as a collectivist society as mandated by contract by their sponsoring investors. No matter how much a person worked, everybody would get the same amount. It didn’t take long for the less industrious to realize that their diminished labor would net them the same result of the most industrious. Working for the gain of others took the incentive out of labor and risk.

William Bradford, the acting governor of Plymouth Colony, wrote the following in his first-hand account of events:

The experience that we had in this common course and condition, tried sundry years … that by taking away property, and bringing community into a common wealth, would make them happy and flourishing – as if they were wiser than God.

For this community (so far as it was) was found to breed much confusion and discontent and retard much employment that would have been to their benefit and comfort. For young men that were most able and fit for labor and service did repine that they should spend their time and strength to work for other men’s wives and children without [being paid] that was thought injustice.

This [free enterprise] had very good success, for it made all hands industrious, so as much more corn was planted than otherwise would have been.

Not only is Socialism immoral; it doesn’t work.