We’re seeing a radical push by so-called Progressives to redefine human nature by an appeal to the God who created the natural world and all things in it. You may have seen this meme:

When did using your religious beliefs to discriminate against others become a Christian value? Choose love.

This is an example of the loaded question fallacy, “When did you stopped beating your wife?” The question assumes something that is not in factual evidence. The person being asked the question is assumed to be guilty about something that he did not do.

“Whether the respondent answers yes or no, he will admit to having a wife and having beaten her at some time in the past. Thus, these facts are presupposed by the question, and in this case an entrapment, because it narrows the respondent to a single answer, and the fallacy of many questions has been committed.”

First, what standard is being used to make a moral judgment about same-sex sexuality? The meme does not say. It’s inferred that the standard is the Bible since the meme is being directed at Christians, and Christians believe the Bible is the standard for morality. Therefore, the Bible must be used to evaluate the claim of the meme. 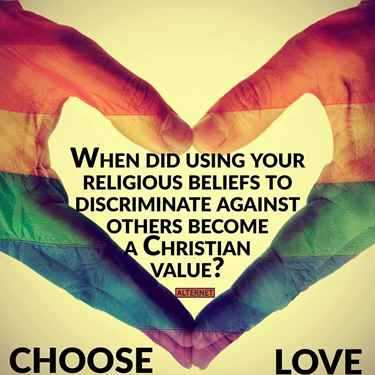 Second, what does the Bible say about same-sex sexuality? From the beginning, men and women were designed to be complimentary sexual beings (Gen. 1-2). The sexual parts were made to fit. The result of a sexual union between a man and woman results in a complementary offspring. This is positive feedback that heterosexuality is the standard. In addition, there are passages that condemn the practice of same-sex sexuality in the Old Testament (Lev. 18:22; 20:13) and the New Testament (Rom 1:25-27; 1 Cor. 6:9-11; 1 Tim. 1:8-11).

Third, because there are moral standards in the Bible that apply to all of life, not all discrimination is wrong. In fact, the meme itself is making a value judgment about Christians who hold to a set of biblical moral values. This is called “discrimination.” People who hold the position that same-sex sexuality is immoral (based on the Bible) are being discriminated against in hiring, public profession (people on Facebook who wrote comments in opposition to the meme were blocked), and in businesses. Discrimination is an inescapable concept. Everyone discriminates based on the operating assumptions of their worldview.

Fourth, same-sex sexuality is not the only sexual sin condemned in the Bible. In fact, there are many types of behaviors that are considered to be sinful. Is it morally wrong to “discriminate” against people who do sinful things? Is it wrong to discriminate against a person who has a history of stealing? Is it wrong to discriminate against someone who does not get along with fellow workers? This is why the Bible commands us to “judge with righteous judgment” (John 7:24; also Lev. 19:15; Isa. 11:3-4; Zech. 7:9; John 8:15).

Fifth, Jesus made a moral judgment about a Samaritan woman who had “five husbands” (John 4:18, 39) and the woman caught in the act of adultery (John 8:1-11). What were Jesus’ parting words to the woman, “From now on, sin no more.” Is this not “discrimination” according to the context of the meme? Jesus was calling adultery a sin. Adultery is in the same category as same-sex sexuality.

Sixth, it is an act of love when a person is confronted with his or her sin based on God’s Word. Before Jesus said, “From now on, sin no more,” He said, “I do not condemn you.” Those who constructed this meme only want to hear Jesus say, “I do not condemn you.” They don’t want to hear, “From now on, sin no more.” But that would not be an act of love on Jesus’ part.

Speaker John Boehner Set to Retire from Congress in October