I met Herbert Schlossberg after the publication of his book Idols for Destruction: Christian Faith and Its Confrontation with American Society in 1983. I own two autographed copies. No, they are not for sale. Every Christian should read it. It’s a masterpiece. Marvin Olasky, editor-in-chief of WORLD magazine, wrote the following:

One hundred publishers rejected Idols for Destruction, which chapter by chapter scrutinized the idols many of us worship while hardly realizing it: Idols of history, humanity, money, nature, power, and religion. Finally, Thomas Nelson published it in 1983, and Crossway has republished it in an edition still in print and available on Kindle. Conservatives at Fortune liked its criticism of “the messianic state” and asked me to review it, which I did. A books editor turned down the review, considering it “too religious.”

Yet most of history, Schlossberg saw, came down (or up) to religion. In a WORLD Magazine interview [in 2016], he critiqued the idolatry that led to today’s sexual revolution, “legalized theft” by governments, and other severe problems, but he refused to give up on America. He wrote two scholarly books about Victorian England and how Christians had helped to transform a country seemingly headed for imminent destruction—since they succeeded, 21st century Americans can too.

Schlossberg was smart without being stuffy and warm without being treacly. He set out to warn and inspire us. Will we heed his wisdom, which reflected God’s? 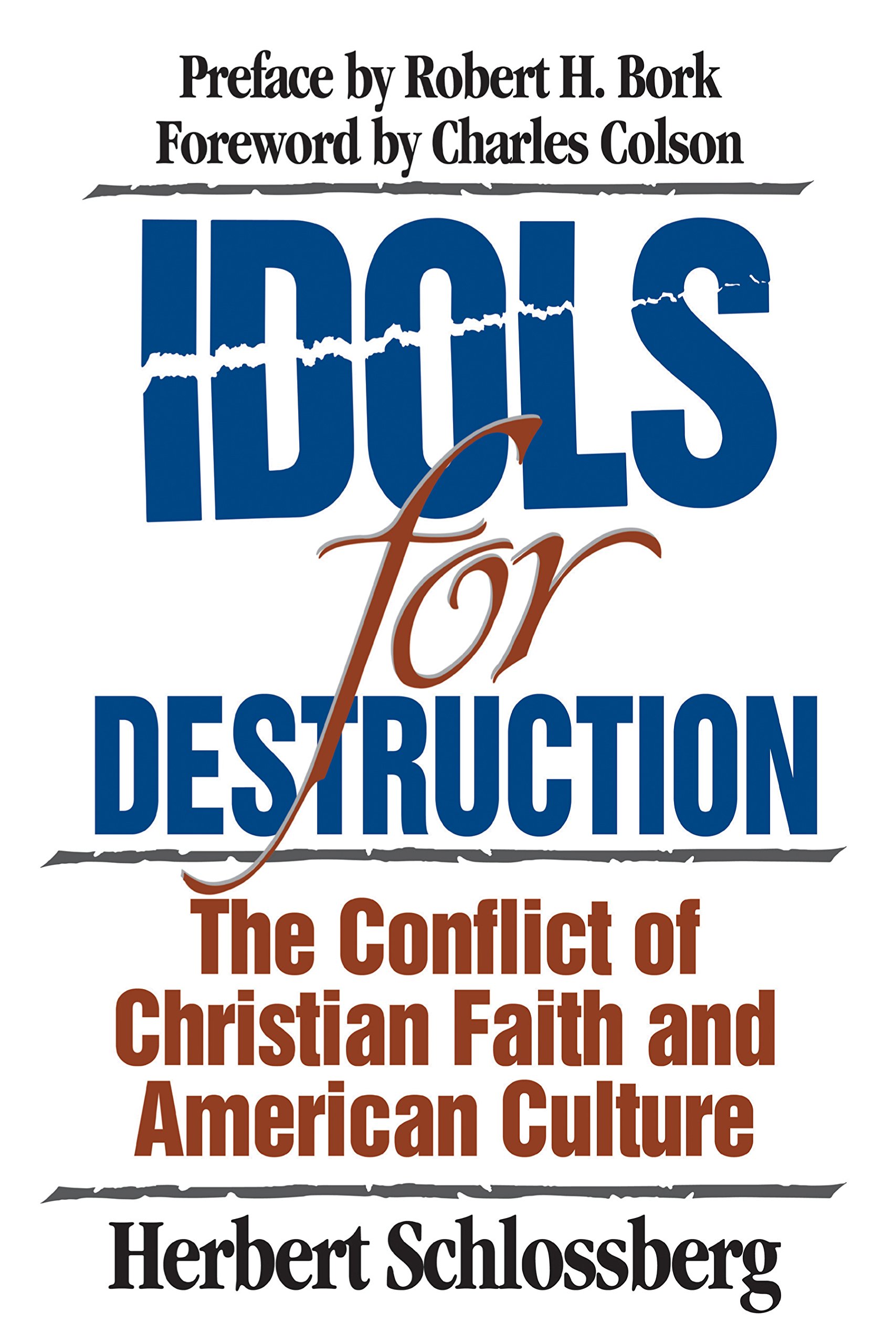 The following excerpts from Idols will give you some idea of the insight of Herbert Schlossberg.

Rulers have ever been tempted to play the role of father to their people…. The state that acts like a wise parent instead of a vindictive judge has been an attractive image to many people. They include ecclesiastical authorities who have completely missed the point of the gospel warning to “call no man your father on earth, for you have one Father, who is in heaven” (Matt. 23:9). The father is the symbol not only of authority but also of provision. “Our Father who art in heaven…. Give us this day our daily bread” (Matt. 6:9, 11). Looking to the state for sustenance is a cultic act [an act of worship]; we rightly learn to expect food from parents, and when we regard the state as the source of physical provision we render to it the obeisance of idolatry. The crowds who had fed on the multiplied loaves and fishes were ready to receive Christ as their ruler, not because of who he was but because of the provision. John Howard Yoder1 has rightly interpreted that scene: “The distribution of bread moved the crowd to acclaim Jesus as the new Moses, the provider, the Welfare King whom they had been waiting for.”2

Power is most dangerous in the hands of people who believe what they are doing is for our well being because they contend that their intentions to help the less fortunate are righteous and just. It’s the intention to do good things that matter not the actual results. In J. R. R. Tolkien’s The Lord of the Rings, the power of the ring is not something to be desired even by good people. Even Gandalf and the elves shun the power of the ring. Tolkien is doubtful that any person has the ability to resist the temptation of absolute power promised by the ring, even if that power is used for good. Schlossberg continues:

The paternal state not only feeds its children, but nurtures, educates, comforts, and disciplines them, providing all they need for their security. This appears to be a mildly insulting way to treat adults, but it is really a great crime because it transforms the state from being a gift of God, given to protect us against violence, into an idol. It supplies us with all blessings, and we look to it for all our needs. Once we sink to that level, as [C.S.] Lewis says, there is no point in telling state officials to mind their own business. “Our whole lives are their business.”3 The paternalism of the state is that of the bad parent who wants his children dependent on him forever. That is an evil impulse. The good parent prepares his children for independence, trains them to make responsible decisions, knows that he harms them by not helping them to break loose. The paternal state thrives on dependency. When the dependents free themselves, it loses power. It is, therefore, parasitic on the very persons whom it turns into parasites. Thus, the state and its dependents march symbiotically [in close union with one another] to destruction.4

When the provision of paternal security replaces the provision of justice as the function of the state, the state stops providing justice. The ersatz [artificial and inferior substitute] parent ceases executing judgment against those who violate the law, and the nation begins losing benefits of justice. Those who are concerned about the chaos into which the criminal justice system has fallen should consider what the state’s function has become. Because the state can only be a bad imitation of a father, as a dancing bear act is of a ballerina, the protection of this Leviathan of a father turns out to be a bear hug.5

Politicians pick up on the desire for security and dependency and use them for political gain: “The idol state uses the language of compassion because its intention is a messianic one. It finds the masses harassed and helpless, like sheep without a shepherd, needing a savior.”6.

For a detailed analysis of Idols, see the three newsletters (below). Dr. Gary North said the following about Idols for Destruction:

Let me say from the outset that the book is very nearly flawless. His style, the balance of topics, the lucid analysis, the theological framework, his use of ridicule (where warranted), his memorable aphorisms, and above all, the book’s basic thesis, all combine to make this book, hands down, the most important single-volume critique of contemporary secular humanism available today.

Is Gog and Magog Battle About to Commence?