Hillary Clinton will say whatever is necessary to get elected. The biggest whopper is that the Bible is the biggest influence in her life. The following is from 2014:

“Many believe a 2016 presidential bid by Hillary Clinton is all but inevitable. With her recent increase in media exposure, the former first lady seems to be adding credibility to those assumptions.

“Of course, the fledgling campaign has hit a few roadblocks. . . – including an interview with Diane Sawyer . . . that led to widespread criticism. An answer she gave during a New York Times interview . . . has resulted in similar backlash.

“In its Sunday Book Review, the newspaper asked Clinton a series of literature-based questions. One of the inquiries sought to determine the one book that made her who she is today.

“‘At the risk of appearing predictable,’ she responded, ‘the Bible was and remains the biggest influence on my thinking.’

“Clinton noted that she was ‘raised reading it’ and had memorized many of its passages. She contended that the Bible has guided her throughout her life.

“‘I still find it a source of wisdom, comfort and encouragement,’ she concluded.

“Many who believe the values she has embraced as a public figure contradict God’s Word took to social media to express their incredulity.”

When I read what she had to say about the Bible to my wife, neither one of us could contain our laughter. Almost immediately, however, we both remarked that a lot of low information voters will believe her and will be inclined to vote for her because of her “spirituality.” 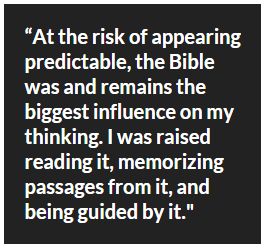 It’s not what a person says about the Bible that matters; it’s what a person does with its message. A tree is known by its fruit (Luke 6:43-45). James writes that faith without works is dead (2:17). Supporting wealth confiscation, killing unborn babies, and promoting same-sexuality cannot be reconciled with the Bible. And neither is using other people’s money in attempt to fixed economic equality or spread a leftist social and political cause the definition of good works.

While what Hillary said about the Bible sounds ridiculous to us, we know how ignorant voters are. many will conclude, based on her word alone, that she is a good Christian woman.

Of course, they’re not discerning enough to ask, “If the Bible ‘remains the biggest influence on [her] thinking,’ then why doesn’t she abide by what it says?”

Bill and Hillary opposed same-sex marriage when Bill was running for president. It was Bill Clinton who signed the Defense of Marriage Act seemingly because the Bible was a major influence on Bill’s life. When the political winds shifted to support same-sex marriage, they changed their position.

Barack Obama did the same thing.

My wife and I weren’t the only ones who thought her claim was far beyond the stretch of credulity. People on both sides of the political aisle were incredulous and mocking.

Politics is not about honesty. It’s about how some people can use government at the expense of other people to gain influence, power, and money. The presidential oath means nothing.

And it’s not just presidents who violate their oath to follow the Constitution, and not all the blame resides with politicians. There are enough voters out there who want their man or woman to govern in a way that brings benefits to them at the expense of others, and if politicians are willing to lie about the Bible to satisfy a large segment of the population to gain the reigns of power and influence, it shouldn’t surprise us that they will lie about nearly everything else.