Hillary Clinton is the personification of George Orwell’s 1984, the epitome of Newspeak.

John W. Whitehead’s 1982 book The Second American Revolution was a wakeup call to Christians that was not heard by enough them and heeded by even fewer. Nearly everything Whitehead, president of the Rutherford Institute, “predicted” in 1982 about Big Brother is a reality today. Too many Christians either had their head in the sand denying that they had any biblical reason to get involved politically or in the clouds waiting for Jesus to “rapture” them out of this world before the SHTF in something called The Great Tribulation.

Always lurking in the background of his many books is the creeping shadow of 1984 and this horrifying image painted by Orwell:

“If you want a picture of the future, imagine a boot stamping on a human face forever.” 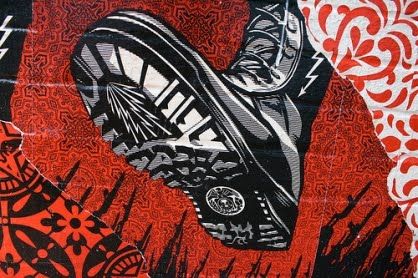 “1984” portrays a global society of total control in which people are not allowed to have thoughts that in any way disagree with the corporate state. There is no personal freedom, and advanced technology has become the driving force behind a surveillance-driven society. Snitches and cameras are everywhere. And people are subject to the Thought Police, who deal with anyone guilty of thought crimes. The government, or “Party,” is headed by Big Brother, who appears on posters everywhere with the words “Big Brother is watching you.”

In Hillary Clinton’s new book about her excuse-ridden 2016 election loss to Donald Trump, What Happened, she adds this bit of revisionist history about 1984:

“Attempting to define reality is a core feature of authoritarianism. This is what the Soviets did when they erased political dissidents from historical photos. This is what happens in George Orwell’s classic novel Nineteen Eighty-Four, when a torturer holds up four fingers and delivers electric shocks until his prisoner sees five fingers as ordered. The goal is to make you question logic and reason and to sow mistrust toward exactly the people we need to rely on: our leaders, the press, experts who seek to guide public policy based on the evidence, ourselves.

It’s telling that The Guardian leaves out the crucial passage: “‘The goal is to make you question logic and reason and to sow mistrust’ [missing text], Clinton writes. ‘For Trump, as with so much he does, it’s about simple dominance.’”

The very people Hillary says we should trust, 1984 says we should not trust because they are the ones telling us that four fingers are really five fingers.

And that’s its purpose.

The larger agenda is to force irrational conformity so we will accept anything and everything the State and its supportive agencies put into law. It starts with small irrational stuff and leads to really big stuff, like convincing women that killing their unborn children is a fundamental right and a good and essential moral choice.

We’ve already accepted so much irrationality that most people can’t see it. Millions of Americans are OK with taxing some people so their money can be given to other people who did nothing to earn it. In a day of fixed moral values and rational thought, this would have been called stealing. Another word for it would be “slavery.” A slave works while others profit.

The greater good argument has gotten us into a fiscal nightmare, and each new morning does not make it go away. In fact, the nightmare gets worse every day. Even so, the irrationality continues.

Laws are being proposed that will fine people for using the wrong gender designation. Facebook lists 58 of them.

Individuals living in New York City can choose from a minimum of 31 different gender identities, many of which allow them to fluctuate between some version or combination of male or female identities.

Angelo M. Codevilla, the author of The Ruling Class, shows with this excerpt from his essay “The Rise of Political Correctness” how irrationalism leads to 1984-style tyranny espoused by people like Hillary Clinton:

“Consider our ruling class’s very latest demand: Americans must agree that someone with a penis can be a woman, while someone else with a vagina can be a man. Complying with such arbitrariness is beyond human capacity. In Orwell’s 1984, as noted, Big Brother’s agent demanded that Winston acknowledge seeing five fingers while he was holding up four. But that is small stuff next to what the U.S. ruling class is demanding of a free people. Because courts and agencies just impose their diktats, without bothering to try to persuade, millions of precisely the kind of citizens who prize stability have become willing to take a wrecking ball to what little remains of the American republic, not caring so much what happens next.”

The thing of it is, people do believe that four fingers can be five fingers when they believe that prosperity can be achieved by printing more money and adding it to the economy.

If people can be convinced that money can be created out of thin air and a woman can become man, and a man a woman, there’s nothing they can’t be convinced of without the use of force. Hillary, and many like her, love Big Brother.