Get Ready for Chimpanzee Voter Rights for Democrats

ABC News reports that “[a] state appeals court will decide in coming weeks whether chimpanzees are entitled to ‘legal personhood’ in a case that could lead to expanded rights for animals such as gorillas, elephants and dolphins, according to the lawyer advocating for a 26-year-old chimp named Tommy.”

Unborn babies don’t have any rights. They can be killed for any reason.

Business owners don’t have any rights. They must sell to people even if they disagree with their immoral lifestyles or radicalized ideologies.

Will they be able to get food stamps, collect unemployment, vote, and attend college for free? The ACLU is trying to get the courts to stop all voter ID laws.

If chimpanzees, gorillas, elephants, and dolphins are given legal personhood status, will they be able to vote? If no IDs are needed, they could fill out absentee ballots. I could see some environmentalists looking for a pod of dolphins and asking them how they would like to vote. Of course, the Democrats would “interpret” their chatter to mean – “Vote Democrat.”

It won’t be too long before pets are designated “legal persons.” If you watch the Home and Garden Network, you can see how this could be possible. It’s amazing how many couples make a decision on purchasing a house based on their pets.

I know, you’re thinking this is a stretch. We’re talking about Democrats who are notorious for getting dead people to vote. 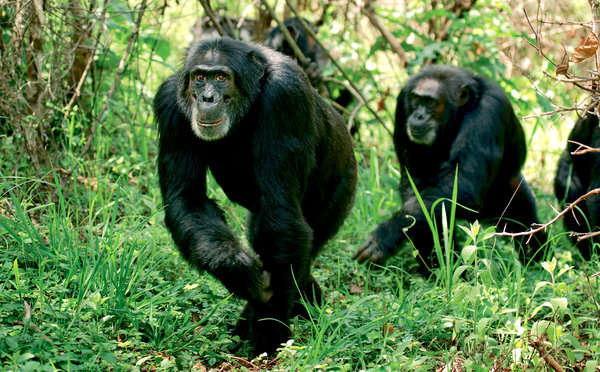 Chimpanzees Going to the Polls to Vote

Who would have ever thought that illegal aliens would be considered for voting rights? But it’s happening:

“[A] new legislative proposal from Democratic Senator Guestavo Rivera of New York may have just proven that opponents of lax border policies have a legitimate concern as it relates to diluting the Conservative and Libertarian voter block, as well as the burden of more government spending to accommodate the influx of people requiring assistance.

“If passed, the new law would give illegal immigrants the right to not only vote in local and state elections, but they’d also enjoy many of the taxpayer funded benefits available to American citizens.”

Who could have imagined that the courts would have said that people of the same sex could marry?

If the courts rule that certain animals are “legal persons,” you will see all types of legal briefs being filed to give these new “persons” access to everything legal and illegal persons now get.

As Rush Limbaugh says, it’s all about politics.

There’s another dimension to chimpanzees becoming legal persons. As persons, will they be subject to our laws? Will they be prosecuted if they commit a crime?

Chimpanzees are wild animals that kill and eat other chimpanzees. Consider David Attenborough’s documentary about chimpanzees that are said to share 97 percent of human genes. The video clip below shows one group of chimps attacking, killing, and eating chimps from a neighboring territory.

If animals are in reality to be legal persons, then why didn’t Attenborough and his film crew intervene?

“What Do You Think Would Happen if We Burned a Koran on Tonight’s Show”?

Get Ready for Chimpanzee Voter Rights for Democrats