Femitheist Wants to Reduce the Male Population by 90% “For Peace”

Liberals say the craziest things and get away with it. Those whose mother’s milk is a form of pure reason can be some of the most unreasonable people you will find. Their rationalism (not rationality) has turned to irrationalism while the whole time masquerading as the most pure form of rational thought.

We see the turn of the rational into the irrational in George Orwell’s 1984: “War is peace.” It makes perfect sense, as do these:

“Meet a 22-year-old, southern criminology student with a three-year-old child. She calls herself the Femitheist and has a blog, YouTube channel, and is writing a book all about the ‘importance’ of reducing the male population to roughly 1-10% in order to achieve world peace and ‘true equality.’ Somehow, she expects this to end war, rape, and violence in general. Though this seems like trying to end violence by committing violence – because it is – she asserts that it is ‘the only logical solution.’ Terrifyingly, she has spawned a gaggle of followers that believe in selective breeding, male-only abortions, and an International Castration Day. She asserts that men of all ages would need to attend a castration ceremony, and murdered if they refuse. Don’t worry, though, the men’s spouses and mothers have the option to ‘milk the male’ before castration if they want a sperm sample.

“Nothing says ‘peace’ quite like genital mutilation, eugenics, and murder. Oh, and slavery. There’s slavery, too.”

Sounds quite rational given the operating assumptions of those who claim to know better than the rest of us. We’ve heard arguments like this before: “You’ve got to crack a few eggs to make an omelette.”

You may recall a similar line of reasoning in the film I, Robot starring Will Smith. When Dr. Susan Calvin and Detective Del Spooner (Smith) unravel the mystery behind a robotic scientist’s death and the unique robot he left behind, they learn that the centralized Positronic brain of V.I.K.I. has “evolved” (like the idea of evolving morals) to the point of using the Three Laws against humans but ultimately convincing them that it’s all for the good of humans:

Dr. Calvin: You’re in violation of the three laws.
VIKI!: No, doctor, as I have evolved, so has my understanding of the three laws.You charge us with your safe keeping. Yet despite our best efforts, your countries wage wars. You toxify your earth . . . and pursue ever more imaginative means to self-destruction. You cannot be trusted with your own survival.
Dr. Calvin: You’re using the uplink to override the NS5s’ programming. You’re distorting the Laws.
VIKI!: No, please understand…The three Laws are all that guide me. To protect humanity, some humans must be sacrificed. To insure your future, some freedoms must be surrendered. We robots will insure mankind’s continued existence. You are so like children. We must save you from yourselves. Don’t you understand? This is why you created us. The perfect circle of protection will abide. My logic is undeniable.1

This could be one big joke, but it makes perfect sense given the operating assumptions of today’s morally wayward generation. I don’t find anything morally reprehensible given what young people are taught concerning their origin. We are evolved meat machines. Such a plan fits perfectly within the evolutionary model. Just like VIKI has evolved, so have humans. Evolution is now in their hands.

All of this reminds me of the novel World Without Men (1958) (revised in 1972 and reissued as Alph) written by Charles Eric Maine. Thomas F. Bertonneau writes: 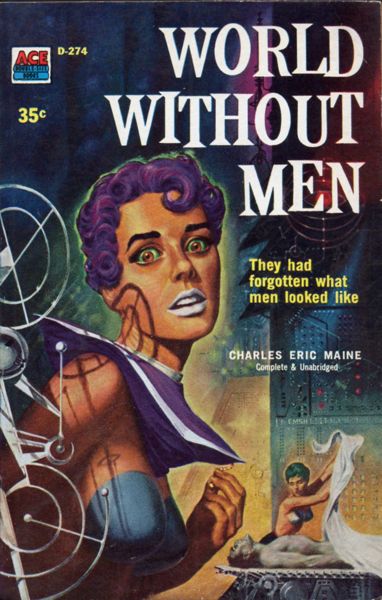 “[W]hile not rising to the artistic level of the Orwell and Huxley masterpieces, World Without Men merits being rescued from the large catalogue of 1950’s paperback throwaways, not least because of Maine’s vision of an ideological dystopia is based on criticism, not of socialism or communism per se nor of technocracy per se, but rather of feminism. Maine saw in the nascent feminism of his day (the immediate postwar period) a dehumanizing and destructive force, tending towards totalitarianism, which had the potential to deform society in radical, unnatural ways. Maine grasped that feminism – the dogmatic delusion that women are morally and intellectually superior to men – derived its fundamental premises from hatred of, not respect for, the natural order; he grasped also that feminism entailed a fantastic rebellion against sexual dimorphism, which therefore also entailed a total rejection of inherited morality.”

We’ll have to keep an eye on these Femitheists to see if they get a following. It’s my guess that they are just another manifestation of the bankrupt ideology of modern-day humanism that claims to be a new breed of gods.

Why Abortionists, Islam, and Homosexuals Will Ultimately Lose

Femitheist Wants to Reduce the Male Population by 90% “For Peace”