On May 28th, 1849, Robert C. Winthrop (1809-1894), a descendant of Governor John Winthrop, first governor of Massachusetts Bay Colony, served as a Representative and Senator from Massachusetts and Speaker of the United States House of Representatives.

He also served as the president of the Massachusetts Bible Society for several years where he advocated that Christian morality was the necessary condition of a free society.

The following is from an address he gave at the Annual Meeting of the Massachusetts Bible Society in Boston:

All societies of men must be governed in some way or other. The less they may have of stringent State Government, the more they must have of individual self-government. The less they rely on public law or physical force, the more they must rely on private moral restraint. Men, in a word, must necessarily be controlled, either by a power within them, or by a power without them; either by the word of God, or by the strong arm of man; either by the Bible, or by the bayonet. It may do for other countries and other governments to talk about the State supporting religion. Here, under our own free institutions, it is Religion which must support the State.1 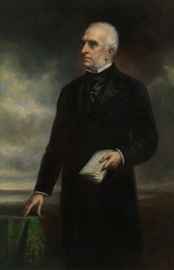 The State, the media, the entertainment industry, the schools, the courts, and even some churches have said that God can no longer be a topic of discussion. To believe in God is said to be anti-science, anti-logic, and anti-logic, therefore it has no place in a discussion of personal, social, and political morality.

The father of the Umpqua Community College shooter could not understand how one person could or should own 13 guns, all bought legally. His guns were found at the college. How can this be since the college is a “gun-free zone”? Guns aren’t the problem, and anti-gun laws are not the solution. People are the problem.

Take a look at the UCC’s course catalog. There are numerous courses on evolution. The shooter and the people he killed (we can’t say murdered) evolved. One group of evolved cells killed other groups of evolved cells. In what way are they significant in a matter-only world of evolved stuff with no ultimate judge to determine if any act is good or evil?

But in a world where evil and good can be accounted for, some sense can be made of murder — killing an image-bearer of God — since it was an early sin (Gen. 4). Life has meaning in such a world. That’s why we grieve for the dead.

But given the operating assumptions of atheism there is no accounting for either good or evil. Self-government under God is no longer an acceptable standard of belief. Who says I should be moral? Why says I can’t hurt someone? You? the group? The State?

There are probably 100 million or more guns in the United States. Gun stores are filled with guns and ammunition.

There are people who have more than 13 guns, and yet 99.99999 percent of gun owners do not murder anyone.

While Ian Mercer did not come out and blame the guns for what his son had done, he came close:

“Even people that believe in the right to bear arms, what right do you have to take people’s lives?” Mercer said. “That’s what guns are: the killers. It’s as simple as that. It’s black and white. What do you want a gun for?”

There is no right to murder someone, whether it’s with a gun, knife, poison, car, drowning, antifreeze, hanging, bombs, airplanes, or club. 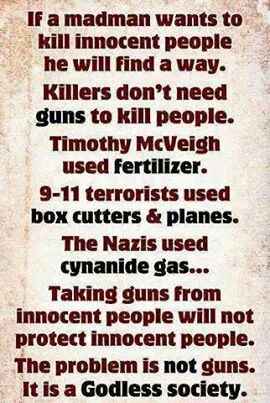 Guns aren’t killers. The people who load them and fire them are the killers in the same way a person who drives a car while intoxicated and kills someone is the killer. Neither the car nor the alcohol killed anyone.

What do we want a gun for? To protect us from people like his son. Does anyone actually think that getting rid of guns will stop evil people from murdering?

The day may come when our nation will become a national gun-free zone. What then? Will human nature change? It won’t. We will then be at the mercy of a government that possesses guns and criminals who will break the law to get their hands on guns.