“People were surrounded by traumatic death. And they didn’t have any idea how far it would go. Was it going to kill everybody? . . . Could this be the end of the world—is this Armageddon that the street corner ministers are preaching about?” (Influenza, 1918)

As expected, with attention being given to Ebola, end-time enthusiasts are claiming that it’s the sign that the end is near. There’s nothing new in making a claim like this. It’s been done before.

When the topic of the end times comes up in conversation, the usual first piece of evidence given that our generation is indeed the “rapture generation” is the state of the world, both its moral character and natural calamities. Nearly all prophetic writers point to the signs of wars, famines, plagues, lawlessness, and earthquakes as prime indicators that the whole prophetic scenario is beginning to fit together like some giant prophetic jigsaw puzzle.

What is often forgotten by today’s prophetic speculators is the horrendous death toll of the Black Death of 1347-1351. Millions died. The estimated death toll throughout Europe was about 30 percent of the population, or twenty-five million out of a population of about eighty million. “Worldwide, the scholarly estimates … remain little more than medieval guesses: perhaps 75 million dead out of a total population of perhaps 500 million.”1 Today’s pestilence catastrophes, including the AIDS epidemic, do not rival the Black Death, which has been described as the “most lethal disaster of recorded history.”2 The Black Death hit everyone.

At the time when the Bubonic Plague swept through Europe, the world’s population was around 545 million. Estimates tell us that 70 million people died as a direct or indirect result of the plague (12.8% of the population). If 100 million people die from Ebola, out of today’s population of 7 billion, this is less than 1.4 percent of the population. In order to compete with the Bubonic Plague, Ebola would have to kill 640 million people (12.8% x 7,000,000,000 = 896,000,000). This calculation, however, is irrelevant in terms of the Olivet Discourse since the events described therein were fulfilled prior to AD70. (See Last Days Madness and Is Jesus Coming Soon?)

A number of prophecy writers are using Luke 21:11 as support for their claim that Ebola may be a sign of the end: “there will be great earthquakes, and in various places plagues and famines; and there will be terrors and great signs from heaven.”

Even the folks who have produced the new Left Behind film are using Ebola to promote their film. 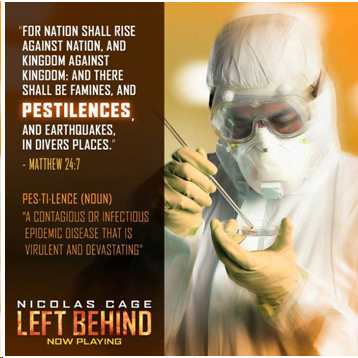 As the siege of Jerusalem in the years leading up to its destruction in AD 70, “people began dying from starvation and plague. The high priest’s wife, who once basked in luxury, scavenged for crumbs in the streets.” Jewish and Roman historians of the time (e.g., Josephus, Suetonius, Tacitus) tell of numerous “scourges,” including famine and pestilence. Albert Barnes notes:

“Pestilences — Raging epidemic diseases; the plague, sweeping off multitudes of people at once. It is commonly the attendant of famine [Acts 11:27-28], and often produced by it. A pestilence is recorded as raging in Babylonia, 40 AD (Josephus, Antiq. xviii. 9.8); in Italy, 66 AD (Tacitus 16.13)4. Both of these took place before the destruction of Jerusalem.”

Prior to and following the great tribulation that overcame Jerusalem in AD 70 there have been famines, pestilence, wars and rumors of wars, and earthquakes.

Numerous records exist of epidemics that preceded the frightful pneumonic/bubonic plagues that visited Europe in 1347. As early as 1331 the epidemic broke out in Hopei Province in China, with reports that it killed nine out of every ten people. Numerous other plagues have been recorded, both before and after the Black Death. The bubonic plague remained unrivaled until the Influenza Epidemic 1918 and 1919 because of the number of dead over a short period of time:

“The influenza pandemic of 1918–1919 killed more people than the Great War, known today as World War I (WWI), at somewhere between 20 and 40 million people. It has been cited as the most devastating epidemic in recorded world history. More people died of influenza in a single year than in four-years of the Black Death Bubonic Plague from 1347 to 1351. Known as ‘Spanish Flu’ or ‘La Grippe’ the influenza of 1918-1919 was a global disaster.”

This information is lost on the average Christian end-timer who views only today’s ills as important and prophetically significant. “Perhaps because we are to such an extent ‘strangers to the past,’ we easily read into the events and circumstances of our own day a distinctiveness and uniqueness that may not actually be there.”5

When Hal Lindsey, for example, reads Jesus’ words in Matthew 24, Mark 13, and Luke 21, he is sure that “WE ARE THE GENERATION HE WAS TALKING ABOUT!”6 Those who suffered through the “great dying” of the fourteenth century and the pandemic of nearly a century ago thought they were the generation Jesus was talking about. All the facts seemed to fit. Death, dying, and starvation were everywhere as Jesus foretold. But did Jesus have the 14th century in mind or the beginning of the 20th? Many thought He did.

“O happy posterity, who … will look upon our testimony as a fable,” wrote Petrarch. The poet nonetheless felt that the events of “that dreadful year 1348” must be recorded for the very posterity that would not believe the testimony. “Will posterity believe,” he wrote from Parma in the late spring of 1349, “that there was a time when, with no deluge from heaven, no worldwide conflagration, no wars or other visible devastation, not merely this or that territory but almost the whole earth was depopulated? When was such a disaster ever seen, even heard of? In what records can we read that houses were emptied, cities abandoned, countrysides untilled, fields heaped with corpses, and a vast, dreadful solitude over all the world?”7

Their catastrophe was not a fulfillment of prophecy. Jesus had a different era in mind when He uttered words describing plagues, famines, earthquakes, and wars on the mount called Olivet. The disciples were to look for signs within their generation, and they found them.

Does any of this history minimize the possibility that Ebola could be as bad or worse as past epidemics? Not at all. Historical perspective is important so as not to escalate fear and panic that could be worse than the disease.

To put things in perspective, compare malaria to what we are seeing with Ebola from the World Health Organization:

Is there risk with Ebola? Yes. Should we take it lightly? No. Could America and the rest of the world be impacted with its spread? Yes. Do I trust the government? No. Is it a sign of the end? Probably not.

The Real Goal in Houston is to Silence Churches