“[It was] very sobering. Millions of innocents denied the most basic and fundamental of all rights–their right to life. One human destroying the life of another deemed ‘less than human.’ Racism, stemming from the evolutionary idea that man came from something less than human; that some people groups are ‘more evolved’ and others ‘less evolved.’ A denying that our Creator–GOD–made us human from the beginning, all of ONE BLOOD and ONE RACE, descendants of Adam. The belief that some human beings are ‘not fit to live.’”

She went on to compare the Nazi death camps to abortion in the United States.

As usual, the haters came out in force. The following passes for rational discourse:

Like the theory of nothing to something, molecules to man evolution, it’s impossible. 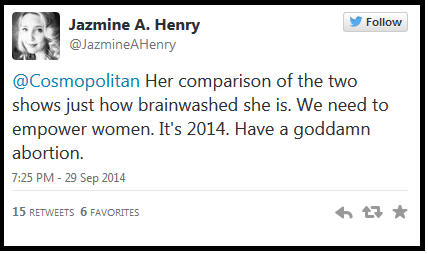 Darwin’s first work, The Origin of Species by Natural Selection, first published in 1859, was the weapon that secularists needed to advance a rival comprehensive worldview based on non-Christian presuppositions. Darwinian evolution was seen as a way out of a world governed by a Creator who demanded ethical absolutes.

German scholar Ernst Haeckel pushed the implications of Darwin’s theories to comprehensive limits. He believed that moral law was subject to biology. “Thousands, indeed millions of cells are sacrificed in order for a species to survive.”1

If this is true of biology, then it is equally true for society. “Haeckel’s use of Darwin’s theories was decisive in the intellectual history of his time. It united trends already developing in Germany of racism, imperialism, romanticism, nationalism, and anti-semitism.”2 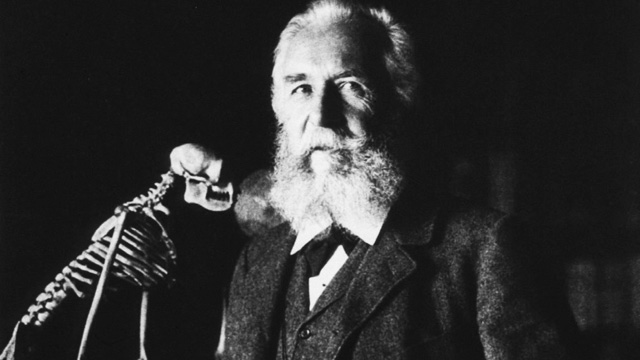 In 1906, at the age of seventy-two, he founded the Monist League. To the Monist, man was one with nature and the animals. Man was no special creation as the “image of God.” He had no soul, only a superior degree of development. The Monist League “united eugenicists, biologists, theologians, literary figures, politicians and sociologists.”3

The Darwinian worldview as expressed by Haeckel’s Monist League was comprehensive in interpreting all of life in terms of the social implications of evolution. The effects on Germany, as all of history attests, was disastrous. “Otto Ammon, a leading racial anthropologist, wrote that the laws of nature were the laws of society. ‘Bravery, cunning and competition are virtues . . . Darwin must become the new religion of Germany . . . the racial struggle is necessary for mankind.’”4

Karl Marx also found in Darwin “the natural history foundation” for his views. Hegel’s philosophy of “dialectical materialism” where conflicting views were synthesized into a third, more advanced stage of development, was now supported by Darwin’s biology and inherent historical implications that “society, like nature, improved over time.”5

Darwin had a similar impact on America, although it did not take the form of Nazism or Marxist Communism. The American industrialist Andrew Carnegie embraced the social implications of Darwin’s theories and applied them to the world of business. “That light came in as a flood and all was clear. Not only had I got rid of theology and the supernatural, but I found the truth of evolution.”6 John D. Rockefeller, using Darwinian logic, believed that “The growth of a large business is merely the survival of the fittest.”7

Robby Kossmann, a German zoologist who later became a medical professor, expresses a proto-Nazi view in his 1880 essay, “The Importance of the Life of an Individual in the Darwinian World View”:

[T]he Darwinian world view must look upon the present sentimental conception of the value of the life of a human individual as an overestimate completely hindering the progress of humanity. The human state also, like every animal community of individuals, must reach an even higher level of perfection, if the possibility exists in it, through the destruction of the less well-endowed individual, for the more excellently endowed to win the space for the expansion of its progeny. . . . The state only has an interest in preserving the more excellent life at the expense of the less excellent.8

There is no doubt that Hitler imbibed the social implications of Darwinism; it had a long history in Germany as Richard Weikart shows in his 2004 book From Darwin to Hitler. Some will say that Hitler and others “hijacked” Darwinism since there is nothing inherent in evolution that logically leads to anti-Semitism.

Certainly Darwin was no anti-Semite, and I suspect that he was no Marxist either, and yet it was Karl Marx who wrote the following to Friedrich Engels: “Although developed in a course English manner, this is the book that contains the foundation in natural history for our view.”9 As history attests, worldwide Marxism has a history even more savage than Nazism as the Black Book of Communism demonstrates, and there is no doubt that atheism and evolution were its driving forces.10

In the final analysis, whether evolution had been hijacked or not is hardly the issue. Evolution is a malleable worldview that can be shaped to support any moral sentiment, good, bad, or indifferent because there is no moral governor, or as the Declaration of Independence put it, “the Supreme Judge of the world,” that stands outside the matter-only cosmos. There is no moral “ought” in evolution. Modern-day evolutionists swear to it.

GOP Could Learn from Black Republican Who Destroys Mary Landrieu