The Meme below has been making its way around Facebook. There are a lot of good “Don’ts” on the list that I can agree with. It’s the first one that has a great number of problems. First, it’s poorly written. “Don’t like gay marriage? Don’t get married.” It makes no sense. It should read “Don’t like gay marriage? Don’t marry someone of the same sex.”

Third, the “gay-marriage movement” is about the redefinition of marriage that has wider implications than the choice for people of the same sex to marry. 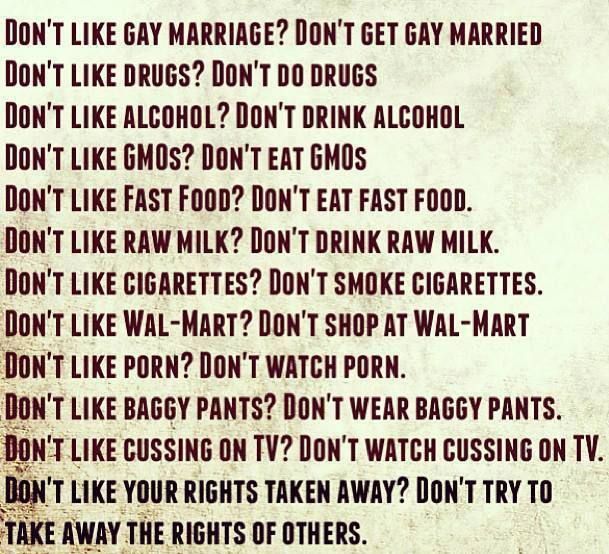 As has been pointed out numerous times, the foot-in-the-door argument was that same-sex marriage won’t affect people who oppose it. That has not happened.

“Jenn Moffitt and her partner Jerra Kincely were on the hunt in February for a wedding videographer.

“She sent an email asking video production business ‘Next Door Stories’ in Bexley, Ohio, if it would cater to a same-sex couple.

“She was shocked by the response.

“‘Unfortunately at this time I do not offer services for same-sex weddings,’ the owner of business wrote in an email Moffitt shared with CNN.”

“The incident comes on the heels of similar complaints from same-sex couples around the country claiming discrimination from wedding vendors. A bakery in Oregon was ordered to pay fines for violating a same-sex couple’s civil rights by refusing to cater their wedding.”

So much for “Don’t Like Gay Marriage? Don’t Marry Someone of the Same Sex.” How about “If you don’t like a baker, florist, photographer, or videographer who won’t service your ‘wedding,’ then find someone who will.”