Did Kevin Meet God and Get Saved in ‘Home Alone’?

I saw a short video about redemptive elements in the first Home Alone film. It’s been some time since I’ve seen Home Alone, so I was intrigued enough to watch “Did Kevin Meet God and Get Saved in Home Alone?

What did the writers, producers, and directors have in mind when they put obviously Christian elements in Home Alone? Of course, religious elements can’t be avoided, no matter how secular or even atheistic a writer or director might be.

Although written by John Hughes (1950-2009), Home Alone was directed by Chris Columbus who may have been the inspiration for some of the redemptive elements in the film:

“The character types preferred by Columbus are the everyday American men, women and children who struggle to uphold family traditions against a changing, sometimes intimidating society. In 1993 he said: ‘I can understand the validity of showing people the ugliness of the world, but I also think there is a place for movies to leave people with a sense of hope. If your film isn’t going to do that, I just don’t think it’s worth making.'” (H/T: Wikipedia)

Home Alone is no exception.

Les Lanphere, the person who produced the following video, writes:

“I watch home alone with my family every year, but this year I noticed a few details that started to make me think something deeper is going on. When I dug in, the rabbit hole went deep. I believe that Kevin McCallister actually meets God and becomes a Christian in this movie. I’M NOT CRAZY… sorry for yelling. Watch and believe!”

He’s not the only one who has noticed some particular religious themes not noticed by the average viewer, like the “stigmata.”1 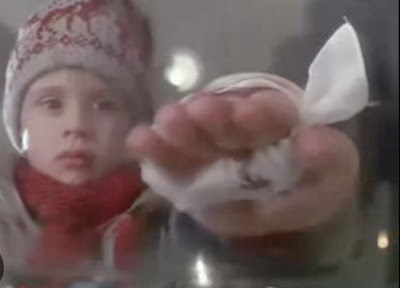 Anyway, watch and let me know what you think:

Did Kevin Meet God and Get Saved in ‘Home Alone’?