Do you remember California Supreme Court Justice Janice Rogers Brown who is the daughter of Alabama sharecroppers? George W. Bush first nominated Brown in September 2003 to the U.S. Court of Appeals for the D.C. Circuit.

Justice Brown is black, but not the right kind of black. As a result,  she was “graphically pilloried as an Aunt Jemima by an Internet cartoonist, jokingly likened to a serial killer by a Democratic U.S. senator and denounced by so many liberal interest groups that her Senate ‘opposition’ file bulges at nearly four pounds.”

Who do you think led the opposition to Judge Brown’s nomination? Democrat Senator Dick Durbin of Illinois was front and center, the same Dick Durbin who opposed Condoleezza Rice’s confirmation as Secretary of State and recently attacked Republicans for opposing Loretta Lynch. Durbin took to the Senate floor to attack Republicans  by describing Lynch as “the first African-American woman nominated to be attorney general.” What does her being black or white have to do with justice?

Invoking civil rights icon Rosa Parks, Durbin continued with his defamation of Republicans who have voiced opposition to Lynch by stating that not to vote for her is asking her “to sit in the back of the bus when it comes to the Senate calendar.” He continued, “That is unfair, it’s unjust. This woman deserves fairness.” 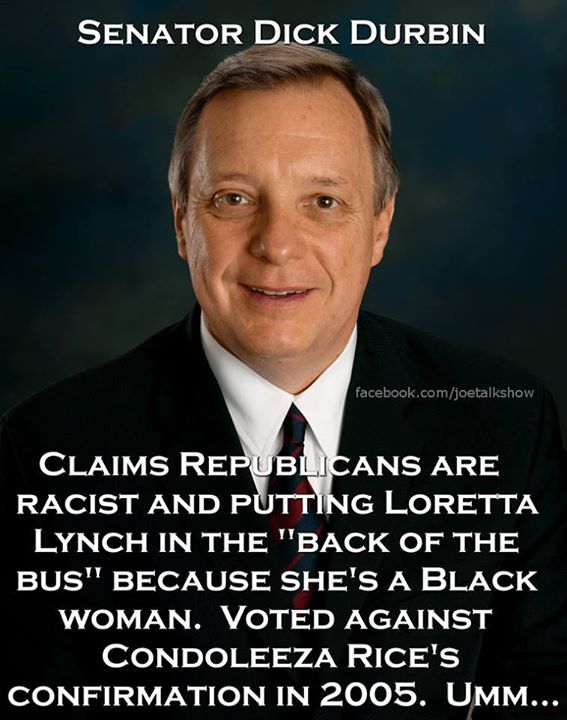 Yes, Loretta Lynch deserves fairness based on her political views and record and her conformity to the Constitution that she would be called on to take an oath to uphold.

The Republicans made a huge mistake in voting for Eric Holder. I’m sure there were reservations among Republican Senators who voted for him as I’m also sure those reservations were put aside because they knew that any opposition to Holder would be attacked as racial.

Republicans and Democrats vote on these nominees based on their records. Liberals vote against conservatives, and conservatives vote against liberals. (Not enough times in my opinion.) Durbin knows this. He made his case against Justice Brown based on her conservative voting record. Here’s some of what he said:

“Now, let me say a word about today’s nominee. Justice Brown’s life story, which the Chairman has alluded to, and her achievements are amazing, and I congratulate you on your appointment to the court in California. To your supporters, you are an eloquent and passionate voice for conservative values. In both your opinions and your speeches, you speak with great flair and great intellect. Others, however, tell a different story. They say you are a results-oriented judicial activist who fashions her opinions to comport with her politics. You are a frequent dissenter in the right-ward direction, which is quite a feat, given that you serve on a court that is made up of six Republican-appointed judges and only one Democrat.”

But when Republicans voice opposition to Loretta Lynch because she looks like someone who might be a “frequent dissenter in the left-ward direction,” Dick Durbin pulls the race card. It’s all liberals have.

Being black counts only when a person is the right kind of black—an ideological liberal black. That means a black who will vote the Democrat playbook into law and continue to subjugate black people by laws that cripple black communities and families. Ed Whelan writes the following in National Review Online:

“All of this is further evidence for the proposition, long advanced by the Wall Street Journal op-ed page, that liberals are very scared by blacks who have dared to escape from the comforts of the liberal plantation.”

Let’s not forget to mention that establishment Republicans are equally afraid of real conservatives that threaten their power base. There’s a lot of guilt to go around.

Why Aren't There Starbucks in These Majority Black Cities?