Don’t think that every minister of a church knows what God’s Word says on a topic and how to rightly interpret what it says. There are numerous “false shepherds” (Ezek. 34) among our nation’s churches. The apostle Paul warned the elders in Ephesus about them:

I know that after my departure savage wolves will come in among you, not sparing the flock; and from among your own selves men will arise, speaking perverse things, to draw away the disciples after them. Therefore, be on the alert, remembering that night and day for a period of three years I did not cease to admonish each one with tears (Acts 20:29-31).

A Denver church is weighing in on a Supreme Court decision in favor of a Lakewood baker who refused to sell a wedding cake to a gay couple.

A sign outside of the South Broadway Christian Church at East Ellsworth Avenue and Lincoln Street reads “Jesus would have baked that cake.” The pastor who posted the sign, Dustin Adkins, said the message deals with inclusion.

“Jesus worked with folks on the periphery of society, mistreated and marginalized,” Adkins said. “Those folks are the ones he welcomes the most.” (9News) 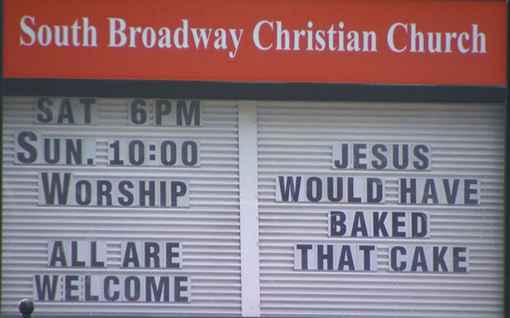 Jesus did minister to the marginalized, but He never glossed over their sin.

Jesus fed thousands of people by multiplying bread (making Him an extraordinary baker) and fish (Matt. 14:13-21; Mark 6:43; 8:19; Luke 9:17; John 6:13). There might have been thieves, adulterers, people practicing sodomy, and even a murderer or two among the crowd of thousands.

He turned water into wine at a wedding in Cana (John 2:1-11). If Jesus had been a baker, He most likely would have made a cake for anyone who asked Him, but He would not have decorated a cake with a message celebrating an immoral lifestyle.

And there lies the difference.

It’s the same difference that Jack Phillips of Masterpiece Cakeshop has repeatedly pointed out that many people refuse to acknowledge, are too ignorant to get the story straight, or just want to malign him to advance a rotting political agenda:

“I don’t create cakes for Halloween,” Phillips told KUSA. “I wouldn’t create a cake that was anti-American or that would be disparaging against anybody for any reason, even cakes that would disparage people who identify as LGBT. Just cakes [that] have a message, and this is one I can’t create.”

Jesus had encounters with several women, two of whom we know were involved in immoral sexual relationships: the Samaritan woman, the woman caught in the act of adultery, “some women who had been healed of evil spirits and sicknesses: Mary who was called Magdalene, from whom seven demons had gone out” (Luke 8:2), and an unidentified woman who is described as a “sinner” (Luke 7:36-39; also, Matt 26:6-13; Mark 14:3-9).

Are we to believe that Jesus would have made cakes in celebration of their sexual choices since the Bible is clear that only men and women are to marry? Why would Jesus celebrate what God’s Word condemns?:

We know that no such cakes would have been made by Jesus. He would have ministered to these marginalized people, pointing out their sin (John 4:16-18), even healing them of their demon possession (Luke 8:2), and warning them, “from now on sin no more” (John 8:11) “so that nothing worse happens” to them (5:14). He would not have contributed to their folly and sinful lifestyle by being “inclusive” by making a cake celebrating what God’s Word condemns.

Adding a message to a cake for any of the sexual relationships listed above would be an admission of acceptance. A homosexual marriage is a statement of a rejection of what the Bible says about the God-created design of marriage. Such an affront to God’s Word would be met with the same condemnation that was leveled against Eli by God: “Why do you kick at My sacrifices and at My offering which I have commanded, and honor your sons above Me…?” (1 Sam. 2:29).