Churches have been fooled into believing that they are prohibited from discussing politics from the pulpit. For more than 50 years the threat of the IRS revoking a church’s tax-exempt status has been held over churches. Some pastors don’t care because they don’t want to address controversial issues like politics.

When a church member approaches a pastor with, “Why aren’t you addressing the issues of the day?,” a pastor will often say, “I can’t. The IRS prohibits churches from addressing issues that are political. And everything is political.”

State governments and anti-Christian lobbying groups have taken advantage of this ignorance by threatening churches with the loss of their tax-exempt status. The latest example is from Hawaii:

Actually, they do. In addition, no state can enforce federal tax law.

The Alliance Defending Freedom sent a letter to Hawaii Attorney General Russell Suzuki on Monday taking issue with a guidance letter he sent out last month regarding charities and political activity.

ADF Senior Counsel Erik Stanley wrote that he believed Suzuki’s guidance was “clearly an intimidation tactic leveled at Hawaii’s houses of worship to frighten them into silence on the upcoming elections for political office.”

“Houses of worship need not be silent during elections out of a misplaced fear that simply participating in the life of their communities and their state, they will somehow run afoul of federal tax law,” wrote Stanley. (Christian Post)

I wonder what the Attorney General of Hawaii would say about Gov. Andrew Cuomo speaking at a Brooklyn church on August 19 where he attacked President Trump. Addressing politics from the pulpit is only OK if the person speaking is a Democrat and the person being attacked is a Republican. This type of double standard has been going on for decades. Has a black church ever lost its tax-exempt when a pastor addressed politics from the pulpit? Of course not. 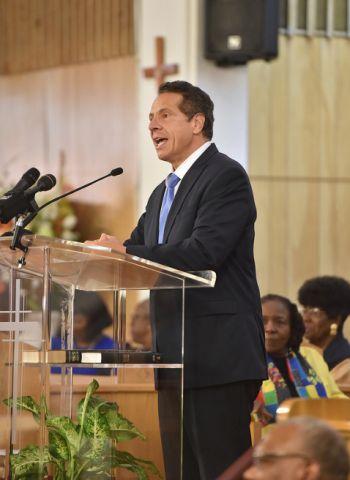 The First Amendment does not prohibit churches from speaking out on any issue, including political issues:

“Congress shall make no law respecting an establishment of religion, or prohibiting the free exercise thereof; or abridging the freedom of speech, or of the press; or the right of the people peaceably to assemble, and to petition the Government for a redress of grievances.

Notice that the prohibition is directed at Congress, our nation’s national law-making body. It can’t establish a religion and it can’t prohibit the free exercise of religion. Period.

Intimidating conservative churches has been going on for a long time.

We got into this mess when in 1954 a law was rammed through Congress by then-Senator Lyndon Johnson to restrict churches from speaking freely on topics they have addressed for nearly two millennia. The following is from the IRS:

The ban on political campaign activity by charities and churches was created by Congress more than a half century ago. The Internal Revenue Service administers the tax laws written by Congress and has enforcement authority over tax-exempt organizations. Here is some background information on the political campaign activity ban and the latest IRS enforcement statistics regarding its administration of this congressional ban.

In 1954, Congress approved an amendment by Sen. Lyndon Johnson to prohibit 501(c)(3) organizations, which includes charities and churches, from engaging in any political campaign activity. To the extent Congress has revisited the ban over the years, it has in fact strengthened the ban. The most recent change came in 1987 when Congress amended the language to clarify that the prohibition also applies to statements opposing candidates.

This so-called ban is a direct violation of the First Amendment. The First Amendment is clear that “Congress shall make no law. . . .” In 1954, Congress made a law prohibiting churches from speaking out on political issues and endorsing candidates. The logic is simple. Since Congress passed such a law, then Congress violated the Constitution. This makes the law null and void.

Election Day Sermons were common in the United States. There was no violation of the First Amendment:

If you are a pastor who believes in the freedoms outlined in the First Amendment and want to challenge this anti-Christian organization and the IRS, then I have a deal for you. The Alliance Defense Fund, a Christian legal advocacy group, will defend you.

In response to more than 50 years of threats and intimidation by activist groups wielding the Johnson Amendment as a sword against the Church, ADF began the Pulpit Initiative in 2008. The goal of the Pulpit Initiative is simple: have the Johnson Amendment declared unconstitutional — and once and for all remove the ability of the IRS to censor what a pastor says from the pulpit.

ADF is actively seeking to represent churches or pastors who are under investigation by the IRS for violating the Johnson Amendment by preaching biblical Truth in a way that expresses support for — or opposition to — political candidates. ADF represents all of its clients free of charge.

Don’t be bullied. It’s time to take a stand for Jesus Christ. Your future and the future of your children are at stake. If you want more information, go to the “Speak Up” site. The next Pulpit Freedom Sunday will be October 5, 2014. Talk to your pastor about it.

Is Working With a Foreign Nation to Win an Election Unconstitutional or a Crime?