DC Tornado-Like Weather and the Proof of a ‘Climate Crisis’

There is no excuse anymore for not getting history right. A simple search on the internet will set the record straight on most historical matters. The Bible requires two witnesses. This is no less true when investigating the claims of history when politicians and special interest groups are trying to pull the wool over our eyes with manufactured claims that that the earth is going to fall apart because of a ‘climate crisis’ that needs to be fixed by giving more money and power to politicians.

The book of Proverbs includes this bit of investigative wisdom:

The following is an example of fake news, fake history, and fake science, and all it took to debunk it was a simple Google search.

Rep. Alexandria Ocasio-Cortez, D-N.Y., went to social media during a tornado warning in Washington, D.C. Like clockwork, she tried to connect the tornado warning to the “Climate Crisis.”

“Climate Crisis” is the new name for the ever-growing list of crises. “Global warming” was replaced with “Climate Change” so any change in the weather or climate could be used as evidence that the government must do something to save the planet before it’s too place. By “save” people like AOC — who said we only have 12 years left if the government doesn’t act — mean more taxes and more control of our everyday lives.

A little history goes a long way to refute such nonsense. Consider the following (Wikipedia):

Debris being cleared up from rowhouses on A Street, Northeast

Here’s how the Washington Post described the Nov. 17, 1927, DC tornado: “Through its mile wide path, the twister strode like a giant, crushing entire blocks of houses, picking others up and tossing them about, nudging over automobiles until they capsized, and then skipping around like a giant gone mad. Its erratic course was a scene of devastation, scores of buildings left roofless, others left without walls, and still others standing jagged in the pouring rain, entire sides ripped out.” 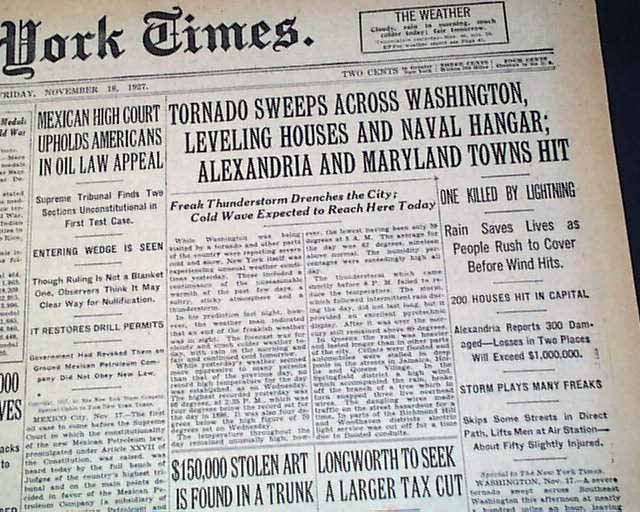 DC Tornado-Like Weather and the Proof of a ‘Climate Crisis’