In the sequel to the film The Godfather, Michael Corleone travels to Cuba during the pre-Castro, pre-Cuban embargo days to finalize some “business” deals with Hyman Roth(stein). “All reports were enthusiastically optimistic,” Doug Casey writes, “but he begged off after witnessing a street fight in which one of Castro’s rebels didn’t hesitate to sacrifice himself to take out a couple of soldiers. Michael concluded that if Castro’s people were that motivated, they were certainly more than just opportunistic bandits.” (see short video clip below)

The following puts this scene in Godfather II in historical perspective:

“In December 1958, an important Mafia summit was held by Hyman Roth and Michael Corleone, aimed to divide Cuba’s tourism industry among various criminal organizations, particularly the Corleone family and the Jewish Mafia.

“After suffering a crucial defeat at Santa Clara, Fulgencio Batista abdicated on January 1, 1959, and many gangsters and other American citizens fled Cuba’s capital Havana. Castro’s forces occupied Havana and other important cities the next day. Havana’s hotels and casinos were nationalized in the months that followed.”

The following is from Doug Casey’s article “Doug Casey On Cuba.” It’s well worth your attention as President Obama normalizes relations with Cuba and lifts the Cuban embargo:

The US embargo on trade with Cuba was put in place by Kennedy in 1962. A window into Kennedy’s venal character is offered by his having sent White House Press Secretary Pierre Salinger out to scrounge up scores of boxes of Cuban cigars the day before he announced the embargo; JFK didn’t want to be even slightly inconvenienced by something he hoped would devastate thousands. 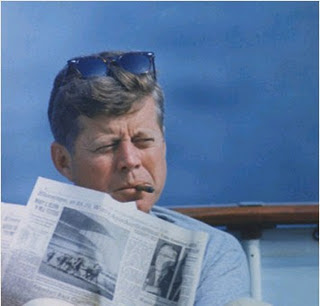 President Kennedy smoking a Cuban Petit Upmann, one of 1200 he procured just before instituting an embargo on Cuban goods.

In theory, the embargo was supposed to economically strangle Cuba and help unseat Castro. In fact, it helped entrench him, because Castro was able to effectively blame the country’s myriad economic problems on an outside source instead of the idiotic economic policies he instituted. And it had the additional advantage of making the Americans look like aggressive and irrational bullies.

If the US government really wanted to see Castro deposed, it would instead have encouraged travel to Cuba. Cubans would have discovered that the average American doesn’t grow horns and have a forked tale. His ideological purity would have been corrupted with imported books, magazines, and videos, and his revolutionary fervor dulled by the prospect of wearing Italian shoes, driving a German car, and taking pictures with a Japanese camera. It was these things, not just the internal contradictions of socialism, and far more than the insane levels of military spending, that caused the collapse of the Soviet empire.

In reality, the embargo has just been a silly, destructive, and massively inconvenient public relations scheme. The Cubans have been at liberty to buy anything in the world they wanted over the last 55 years, including American products, as long as they didn’t buy from an American. They lacked goods not because of the US embargo, but because they simply didn’t have the money to buy from anyone.

Time to Ban Spices and Knives and a Gun-Free Tunisia