Should Churches Arm Their Members?

The unthinkable has happened, and not just at First Baptist Church in Sutherland Springs, where 26 church members were murdered and more than 20 were wounded. There was the horrific race-based shooting in 2015 that took place in Charleston, SC, at the Emanuel African Methodist Episcopal Church where nine people were murdered. There have been other church shootings. The Antioch murders are the worst in United States History.

Churches are soft targets. Their doors used to be always open. Not anymore. Theft, vandalism, and now mass murder are now part of our culture.

In December 2011, a man shot up two churches, killing five people. He was stopped by Jeanne Assam, a voluntary security guard when she shot him.

If crazy evil murderers like these church shooters knew that people in a congregation were armed, do you think they would attempt an assault? I don’t think so.

Every mass shooting in the United States took place in areas where the victims were unarmed: schools, nightclubs, movie theater, and oddly enough, a military base (Fort Hood).

You may recall the Killeen, Texas, Luby’s restaurant shooting in 1991. “George Hennard . . . crashed his pickup truck through the front plate glass window of the Luby’s Cafeteria. . .,  shot 50 people (killing 23), exchanged shots with responding police, and then hid in a bathroom and fatally shot himself.”

“In what she called a ‘stupid decision,’ Hupp said she realized she’d obeyed Texas law and left her gun in her car. At the time, people were not permitted to carry a weapon into public places. ‘It still makes me angry when I think about it. You can’t go up against a guy with a gun with a salt shaker or a butter knife.’”

Gun-Free Zones are soft targets for people who have no regard for the law. The gunman who killed the people in Luby’s Cafeteria had broken the law by bringing a firearm into a place where the law said it was unlawful to do. Murderers are lawbreakers by definition.

Now to the question. Should churches ensure that there are armed and trained people at every service? Absolutely! Christians might say, “But we should put our trust in God.” God has given us the ability to reason and assess the times like the sons of Issachar, “men who understood the times, with knowledge of what Israel should do, their chiefs were two hundred; and all their kinsmen were at their command” (1 Chron. 12:32).

Consider the following from the book of Nehemiah:

But when Sanballat, Tobiah, the Arabs, the Ammonites and the people of Ashdod heard that the repairs to Jerusalem’s walls had gone ahead and that the gaps were being closed, they were very angry. They all plotted together to come and fight against Jerusalem and stir up trouble against it. But we prayed to our God and posted a guard day and night to meet this threat.

Meanwhile, the people in Judah said, “The strength of the laborers is giving out, and there is so much rubble that we cannot rebuild the wall.”

Also our enemies said, “Before they know it or see us, we will be right there among them and will kill them and put an end to the work.”

Then the Jews who lived near them came and told us ten times over, “Wherever you turn, they will attack us.”

Therefore I stationed some of the people behind the lowest points of the wall at the exposed places, posting them by families, with their swords, spears and bows. After I looked things over, I stood up and said to the nobles, the officials and the rest of the people, “Don’t be afraid of them. Remember the Lord, who is great and awesome, and fight for your families, your sons and your daughters, your wives and your homes.”

When our enemies heard that we were aware of their plot and that God had frustrated it, we all returned to the wall, each to our own work.

From that day on, half of my men did the work, while the other half were equipped with spears, shields, bows and armor. The officers posted themselves behind all the people of Judah who were building the wall. Those who carried materials did their work with one hand and held a weapon in the other, and each of the builders wore his sword at his side as he worked. But the man who sounded the trumpet stayed with me. 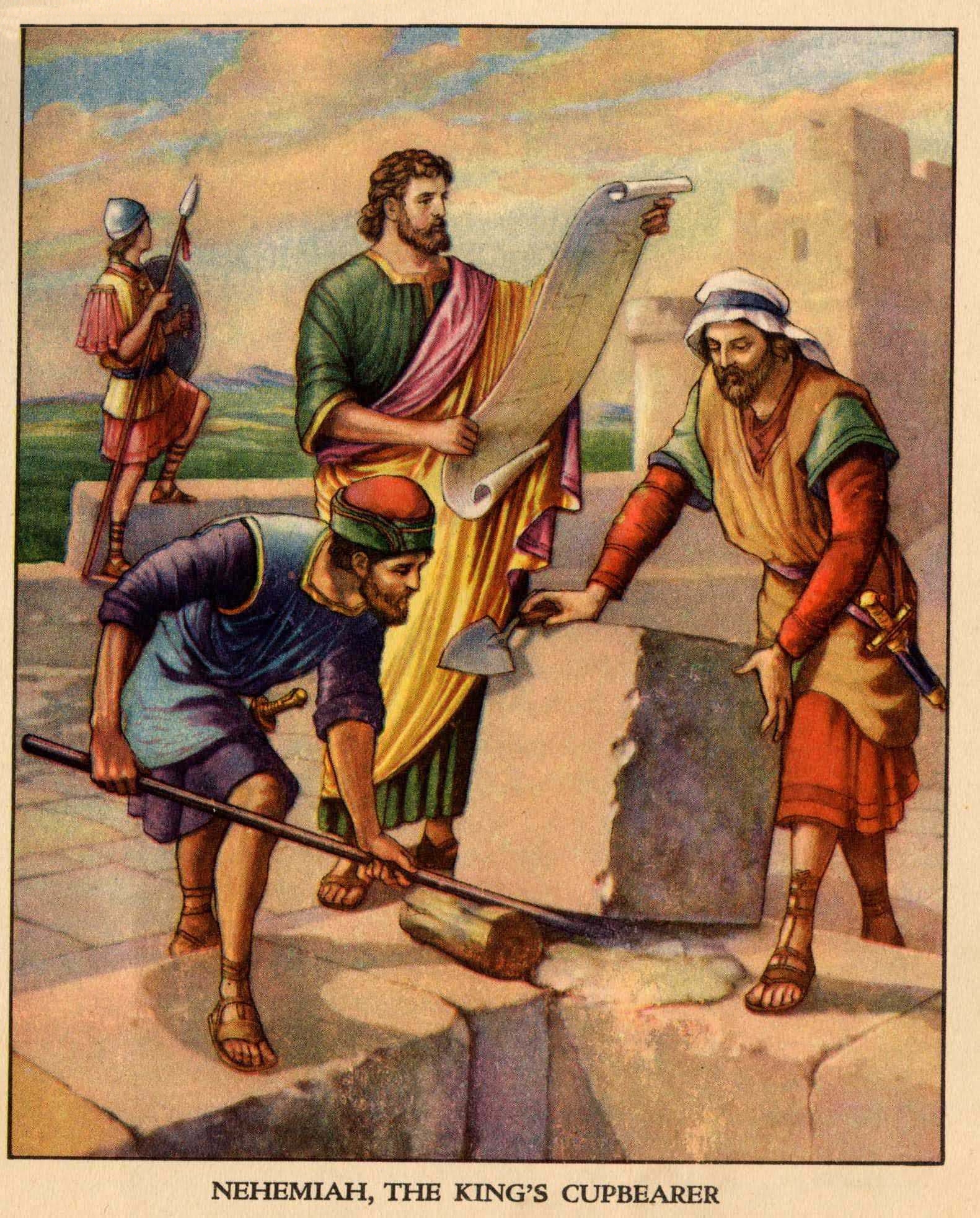 Then I said to the nobles, the officials and the rest of the people, “The work is extensive and spread out, and we are widely separated from each other along the wall. Wherever you hear the sound of the trumpet, join us there. Our God will fight for us!” (vv. 7-13).

While they trusted God and prayed, they also understood that they were responsible for their immediate welfare by posting a guard (v. 9). Notice that while Nehemiah said, “Our God will fight for us,” we’re also told that “half [the men] were equipped with spears, shields, bows, and armor.” This is not a contraction.

They never let down their Guard.

So we carried on the work with half of them holding spears from dawn until the stars appeared. At that time I also said to the people, “Let each man with his servant spend the night within Jerusalem so that they may be a guard for us by night and a laborer by day.” So neither I, my brothers, my servants, nor the men of the guard who followed me, none of us removed our clothes, each took his weapon even to the water (vv. 21-23).

One more thing, when Israel’s enemies heard that the men were armed and on guard, they had second thoughts about attacking.

Get armed. Get trained. Be prepared.

How to Learn the 10 Commandments in 10 Minutes

Should Churches Arm Their Members?