The folks at Sojourners have been pushing socialism in the name of Jesus and the Bible for decades. Claiming that Alexandria Ocasio-Cortez’s economic policies are biblical is the height of absurdity. She does not know anything about economics. Her claim that a $3 billion tax break can be spent is prima facie evidence of her ignorance.

Here’s the latest incarnation of Democratic Socialism. The sad thing is, the Bible is being used to support it. The following is from Dr. Obery Hendricks who teaches Religion and African American Studies at Columbia University:

Virtually from the day she assumed office, Rep. Alexandria Ocasio-Cortez (D-N.Y.) and her avowed democratic socialism have been under attack. Much of the condemnation is from the same crowd that so vigorously insists that America is and always has been a “Christian nation.” This is quite ironic, because democratic socialism and the Bible share a strikingly similar vision of what constitutes a fair and just society. Capitalism, however, does not share that vision.

Humorist P. J. O’Rourke has described the ethics of the welfare state.

There is no virtue in compulsory government charity, and there is no virtue in advocating it. A politician who portrays himself as “caring” and “sensitive” because he wants to expand the government’s charitable programs is merely saying that he’s willing to try to do good with other people’s money. Well, who isn’t? And a voter who takes pride in supporting such programs is telling us that he’ll do good with his own money — if a gun is held to his head.

By the way, Columbia has an endowment of nearly $11 billion. The majority of that money came from people with money, money they can afford to give away. Columbia most likely owns stock in companies that are worth billions of dollars.

To support his position, Dr. Hendricks makes the following argument:

Response: When the government can turn stones into bread and heal people by touch, then I’ll be for it. Jesus never outlined a government healthcare program. Jesus didn’t say, “Follow my example and call on Rome to establish a national healthcare program.” When non-miracle workers are mentioned, it’s the Good Samaritan who comes to mind. He used his own money to care for the man who was nearly beaten to death (Luke 10:25-37). Over the centuries, hospitals and charitable organizations have been named Good Samaritan in honor of the unnamed benefactor. 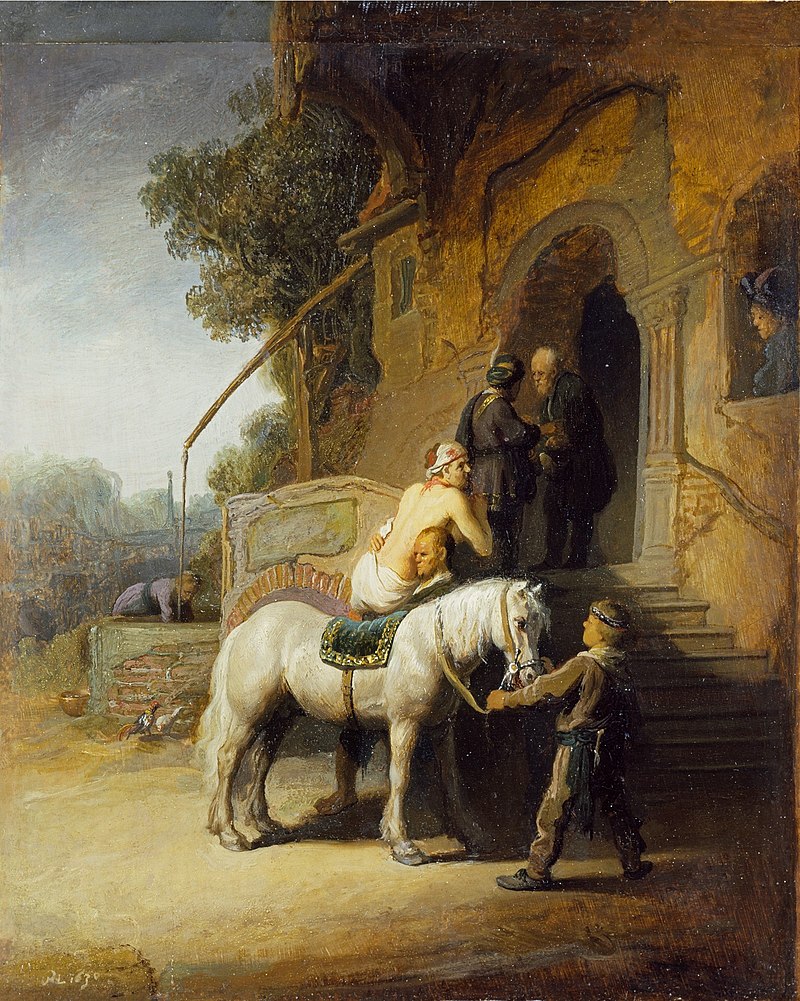 The Good Samaritan by Rembrandt (1630)

Response: The above passage doesn’t say anything about a “fair wage.” The employer and employee agreed on a wage and the employer did not pay him. Notice that it says “makes his neighbors work for nothing and does not give them their wages.” The employer was stealing. When employees and employers agree on a wage and the work to be done, the employer is required to pay the worker in full: “Behold, the pay of the laborers who mowed your fields which has been withheld by you, cries out; and the outcry of those who did the harvesting has reached the ears of the Lord of Hosts” (James 5:4) and “You shall not oppress your neighbor, nor rob him. The wages of a hired man are not to remain with you all night until morning” (Lev. 19:13). Who gets to define “fair wage”?

Response: Once again, there’s nothing in this passage that mandates wealth confiscation and redistribution. The goal is to help the person out of his temporary condition. Money should be lent to him or her at no interest (v. 36). This is a far cry from empowering the State to create a massive bureaucratic welfare system that often keeps people in poverty and dependent on the State.

Response: Once again, this passage is dealing with unethical behavior: “you shall not oppress a hired servant who is poor and needy.” Paying a person an agreed upon wage in a timely fashion is not oppression.

The fact that Dr. Hendricks quotes three passages from the Old Testament and does not find a single passage calling for wealth confiscation and redistribution is a solid indictment of so-called “Christian Socialism.”

Others have pushed socialism in the name of the Bible. Dr. Hamilton is not the first. In the Foreword to Tony Campolo’s book Red Letter Christians, Jim Wallis tells a story about a secular Jewish country-music songwriter and disk jockey who told him that a new social movement was being birthed as a result of Wallis’ God’s Politics and other “social-conscience” books. Here’s how Wallis tells it:

“I love your stuff and have been following your book tour.” Then he told me he believed we were starting a new movement, but he noticed we hadn’t come up with a name for it yet. “I’ve got an idea for you,” he said. “I think you should call yourselves ‘The Red Letter Christians.’ You know those Bibles that highlight the words of Jesus in red letters? I love the red-letter stuff. The rest I could do without.”1

Wallis continues by telling how he shared this story with Campolo, who he calls “the ‘godfather’ of Red Letter Christians” and how excited Tony got when he heard it.

Campolo declared “that there are more than 2,000 verses of Scripture that call us to express love and justice for those who are poor and oppressed.”2 What Campolo, Wallis, and the folks at Sojourners need to find in these 2,000 verses is one verse that gives authority to the State to redistribute wealth. Campolo takes verses that are directed at individuals and turns them on their head by giving them a political twist. Here’s a representative example:

Most important, when we reflect on all Jesus had to say about caring for the poor and oppressed, committing ourselves to His red-letter message just might drive us to see what we can do politically to help those he called, ‘the least of these’ (see Matt. 25:31–46).3

Campolo sees a political solution in these verses when Jesus is addressing what individuals have or have not done. By politically, Campolo means government intervention and wealth redistribution.

To base government programs like welfare, food stamps, and social security on Matthew 25:31–46 is without foundation. The division in Matthew 25 is between sheep and goats, that is, individuals in nations.

Nations don’t visit people in prison; private citizens do. Governments put people in prison; private citizens do not. Civil governments are the biggest hindrance to helping the poor, and it’s not because they don’t tax enough and redistribute wealth efficiently. High taxes and control of the money supply (inflation/deflation) enable civil governments to control people and their property.

Wealth redistribution policies, with all their good intentions, have the effect of hurting the poor and making them dependent on civil government — forever.
Liberals love the Bible when they think they have found something in it that supports their concocted moral, social, and political theories. Even some conservatives fail to recognize that the Bible does not support an expansive tax-and-spend centralized government no matter how beneficent the cause is said to be.

What 'Spocking' Tells Us About Our Money

Beware! There are Marxists in Your Church Ready to Pick Your Pocket in the Name of Jesus