For nearly 40 years I have been writing and speaking on worldview issues from a biblical perspective that includes topics like politics, economics, ethics, and education. It’s been an uphill battle. Trying to convince Christians that they should get involved in these issues has gotten a lot of pushback, mostly from pastors.

A majority of Christians send their children to government (public) schools even though what these schools teach is diametrically opposed to what the Christian parents believe. Most Christians are content with a little bit of socialism, a clear violation of the Eighth Commandment. When it comes to politics, millions of Christians couldn’t be bothered. They’ve been told for decades that politics is not “spiritual.” Most pastors won’t touch the topic for fear of alienating members who may be socially and politically liberal.

Anyone who reads the whole Bible sees that it does not shy away from social, moral, and political realities. A pastor can’t claim to teach “the whole purpose of God” (Acts 20:27) while avoiding politics:

What is the relation of clergy and politics? Should men in the pulpit speak out on social and political questions, and, if so, under what circumstances? Answer: The clergy cannot faithfully expound the Word of God without dealing with virtually every social and political question. The Bible speaks not only about salvation but about God’s law with respect to the state, money, land, natural resources, just weights and measures, criminal law, and a variety of other subjects. The clergy are not to intermeddle in politics, but they must proclaim the Word of God. There is a difference: political intermeddling is a concern over partisan issues: preaching should be concerned with Biblical doctrines irrespective of persons and parties.”1

Politics is messy. King David was an adulterer and an accomplice to murder, and in his later years slept with a young woman to keep him warm, although he did not “know” her (1 Kings 1:1-4). “Know” is a euphemism for sexual relations (Gen. 4:1; 19:5-6; Judges 19:22, 25). Can you imagine a political candidate doing that today? “Well, she’s my nurse. I need her to keep me warm. Doctor’s orders.”

Solomon had multiple foreign wives, horses, weapons of war, and an accumulation of wealth, all in violation of the law regarding kings (I Kings 10; Deut. 17:14-20).

In 1 Kings 11, Solomon’s wives (hundreds of them: v. 3) turned his heart against God even though “the Lord had said to the sons of Israel, ‘You shall not associate with them, nor shall they associate with you, for they will surely turn your heart away after their gods’” (v. 2). As God warned, Solomon’s dalliances with foreign women would have long-term national repercussions:

Even when kings sat down to write out the law of God as required by the law (Deut. 17:18-20), most of them went astray. But there is not a single place in the Bible where God’s people are to avoid the realm of politics.

The apostle Paul appealed to the pagan Roman ruler Caesar (Acts 25:11) to avoid being killed by the Jews, his own countrymen (23:12-22). Paul later explains why he made the appeal:

And when [the Romans] had examined me, they were willing to release me because there was no ground for putting me to death. But when the Jews objected, I was forced to appeal to Caesar, not that I had any accusation against my nation (Acts 28:18-19).

Like I said, politics is messy, but nowhere are God’s people told avoid teaching and practicing a biblical view of the topic. In fact, a civil magistrate is described by Paul as a “minister of God … for good” (Rom. 13:4). 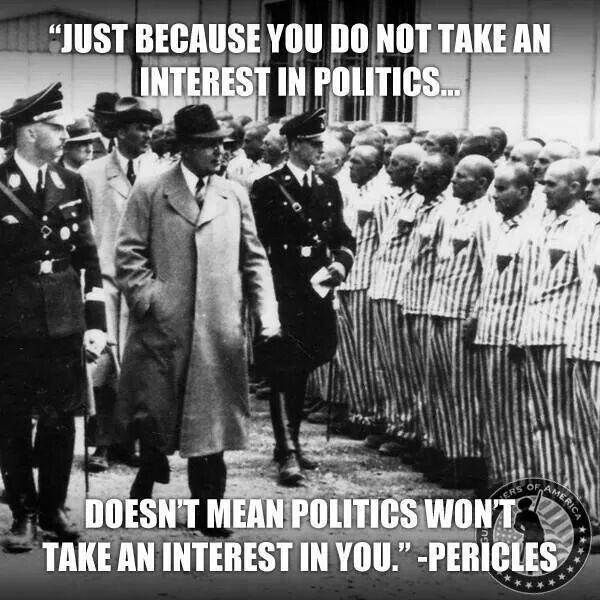 Every four years Christians wring their hands over the sad state of politics. Some refuse to vote. Others complain about the poor choices we’ve been given. Unfortunately, many Christians have been given some bad information on the topic that often passes as biblical truth. Here are some of the “spiritual” reasons often given as to why Christians should not involve themselves in politics:

The goal is not to be involved in politics to extend social interests using compulsion. The Christian’s goal should be to limit the sphere, authority, and power of government.

There’s so much more that could be said on this topic.

I’ve covered the above topics and more in my book Myths, Lies, and Half-Truths: How Misreading the Bible Neutralizes Christians and Empowers Liberals, Secularists, and Atheists.

Are the Views of These Men Responsible for the Las Vegas Massacre?