How many times have you heard prophecy pundits claim that the end of the world or at least some prophetic is near that’s going to change everything?

We’ve got the first of four blood moons coming up on April 14th. Let’s not forget the Chilean earthquake, something that happens quite regularly. You may have seen the picture of the retreating bison from Yellowstone as a warning that the place is about to blow except for the fact that the bison are really going into the park.

War in the Middle East is always a current sign for some prophetic calamity.

In 1970, Hal Lindsey assured millions of reads in his mega-best seller The Late Great Planet Earth that the “rapture” would take place before 1988. Chuck Smith, pastor of Calvary Chapel Costa Mesa, made a similar prediction.

There is the prophecy found in Isaiah 17 that prophecy writers claim predicts a nuclear war in Damascus, Syria. As I’ve pointed out, this prophecy was fulfilled more than 2500 years ago.

A Christian Post article is getting attention: “What is This World Coming To? Exactly What Jesus Said it Would Come To.”

Like so many other prophecy articles, the author looks at the world and argues that the end must be near:

There was a time went nobody went to church. Jesus started with 12 apostles and ended up with billions of followers.

Yes, this administration is probably “the most anti-Christian administration of the modern era.” There have been full atheist regimes in the 20th century. China at one time was officially atheist, and may still be. Some people put the number of Christians in China to be around 100 million.

Predictions about the end are a dime a dozen. I have a library full of books on the subject as well as file folders full of articles on prophecy.

In 1919, Lewis Sperry Chafer wrote Seven Biblical Signs of the Times1. He assured his readers of nearly a hundred years ago that the rapture “is imminent, and has been since the first promise regarding it was given.” In 1979, Colin Hoyle Deal wrote Christ Returns by 1988: 101 Reasons Why. Then there was the tract Strange Events Forecast for 1982.2

In 1988 the World Bible Society sent out a fund raising letter with the following appeal:

“I beg you, as brothers and sisters in the Lord, to take time to read the first ten reasons the Rapture is in 1988 and the first ten pages of The Bible Dates of the 7th Week in Daniel, Armageddon and the Millennium. If you are not totally convinced of the Bible dates, I’ve sounded the trumpet, and I rest my case. We, as Christian booksellers, are responsible to make known to the Body of Christ these upcoming events. The watchman is held responsible, and the blood is on his hands if he doesn’t sound the alarm.”

There was Edgar Whisenant who wrote 88 Reasons Why the Rapture is in 1988.3 In a radio debate I had with him in 1988, he told the audience, “If I’m wrong about this, then the Bible’s wrong.” 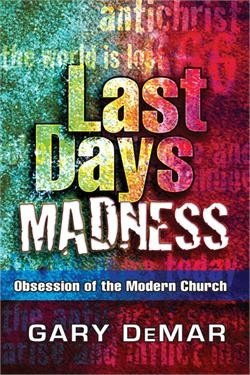 Following these attempts to compile a list of prophetic signs concerning the end times, in 2003 Mark Hitchcock wrote a book with the title Seven Signs of the End Times.4 In his 2012 updated edition, Noah W. Hutchings published 40 Irrefutable Signs of the Last Generation.((Noah W. Hutchings, 40 Irrefutable Signs of the Last Generation (Oklahoma City: Bible Belt Publishing, 2012).)) I have a library full of similar books that have made the same type of claims over the centuries.5 The internet is filled with sites that list supposed end-time signs pointing to the “rapture” or some cataclysmic end-point of history. One site lists 26 signs. Another site compiles a list of 12 signs.

It never seems to end, and too many Christians never seem to learn.

If people are told over and over again that the end is near and it’s right around the corner and there’s nothing we can do to stop in, then why bother? It might explain why church attendance is down and young people are losing interest in Christianity? Christianity is being portrayed as a doomsday religion with an escape hatch called the “rapture.”

We’re living in a time of prophetic inevitability. It doesn’t matter what we do, we cannot stop the rise of the coming antichrist.

It’s all “exactly what Jesus said it would come to.” This is not the Bible’s message. Most of the prophecies cited in the article cited above have to do with events in the first century leading up tot he destruction of Jerusalem that took place in AD 70. This does not mean that there isn’t evil in the world.

What would happen if Christians reengaged themselves in this world instead of sitting back waiting on an apocalyptic event that is always said to be “near”?

Don't Blame the Loss of Religion on the Internet