You’ve probably heard the story of the public school girl in Tennessee who was suspended for saying “bless you” when a student sneezed.

I wasn’t there . . . I don’t know all the facts . . . but I do know that most outbursts during class do not merit a suspension unless it’s repeated or fundamentally inappropriate and the student has a history of such outbursts.

“Assistant Principal Lynn Garner on Tuesday said he could not discuss the specifics of what happened, but he said there are ‘two sides to every story.’”

There does seem to be a religious component to the story if what Kendra Turner has said is true. Kendra says that her teacher told her that there was not going to be any “godly speaking” in her class. “Bless you” constitutes “godly speaking.” Maybe Kendra said “God bless you.” Most of the reports I’ve read say that Kendra only said “bless you.” But even if she said “God bless you,” the teacher was wrong for several reasons.

As far as I can tell, no one has disputed what Kendra claims the teacher said. The teacher has not said that she didn’t say anything about prohibiting “godly speaking.”

“Students sent WMC Action News 5′s Michael Clark a photo of the teacher’s white board that lists ‘bless you’ and other expressions that are banned as part of class rules.” Here it is black on white.

This government school teacher needs a history lesson since the constitution of the state of Tennessee uses “godly speaking.” To disavow one means to disavow the other. A civics class (Do they teach civics anymore?) should have made this clear.

What about the United States Constitution? In addition to the First Amendment, is there anything else in the Constitution that would either deny or support saying “bless you”? Actually, there is. Here’s the Preamble:

“We the people of the United States, in order to form a more perfect union, establish justice, insure domestic tranquility, provide for the common defense, promote the general welfare, and secure the blessings of liberty to ourselves and our posterity, do ordain and establish this Constitution for the United States of America.” 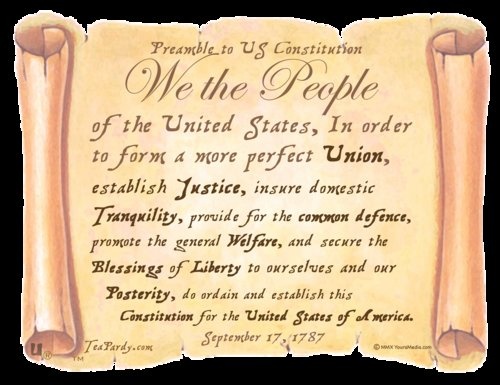 There it is: “secure the blessings of liberty.” “Secure” is the operative word. In his 1828 Dictionary of the American Language, Noah Webster defines “secure” this way:

SECU’RE, a. [L. securus. ] 1. Free from danger of being taken by an enemy; that may resist assault or attack.

Note what follows: “to ourselves and OUR POSTERITY.” Kendra and all students in America are included in “our posterity” and are to have the “secure blessings of liberty,” and that means the fundamental right to say “bless you” when someone sneezes.

If the Constitution is OK with “godly speaking,” then so should Kendra’s teacher.

The ‘I Was Made This Way’ Defense of Vicky Beeching