NBC is reporting that Democrat/Socialist “presidential candidate Bernie Sanders left a campaign event in Seattle without giving his speech Saturday after ‘black lives matter’ activists took over the podium.”

This isn’t the first time that Black Lives Matter protesters have protested racial inequality by going after so-called Progressive candidates. “On July 18, Sanders tried to address a crowd of roughly 3,000 at the Netroots Nation event in Phoenix, but many of the protesters shouted at him and disrupted his remarks.”

What’s going on here? For decades, black voters have been used by the Democrat Party to empower fat-cat Democrat politicians. Trillions of dollars in wealth transfer payments have done little to advance black living standards, teenage employment, or educational standards.

Giving money to people is not the way to advance an economy. It takes the incentive and the need to work out of the employment equation. It’s not just Blacks who have been duped by the Democrat Party. Poor whites have been similarly victimized.

President Lyndon Johnson’s War on Poverty has been a War on the Poor:

“In his January 1964 State of the Union address, President Lyndon Johnson proclaimed, ‘This administration today, here and now, declares unconditional war on poverty in America.’ In the 50 years since that time, U.S. taxpayers have spent over $22 trillion on anti-poverty programs. Adjusted for inflation, this spending (which does not include Social Security or Medicare) is three times the cost of all U.S. military wars since the American Revolution. Yet progress against poverty, as measured by the U.S. Census Bureau, has been minimal, and in terms of President Johnson’s main goal of reducing the ‘causes’ rather than the mere ‘consequences’ of poverty, the War on Poverty has failed completely. In fact, a significant portion of the population is now less capable of self-sufficiency than it was when the War on Poverty began.”

If those trillions of dollars had not been taken from income earners, the money would have been saved and let out, invested, and spent. We would have had full employment, competition for workers resulting in higher wages, and self-respect. Instead we have a multi-generational dependent class that no longer knows what it means to be free.

Look at this chart on the poorest United States cities and note that they are controlled and run by Democrats. 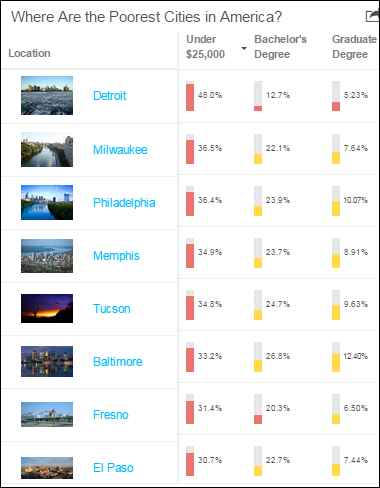 The liberal chickens have come home to roost. The problem is, those who are leading the Black Lives Matter screed are equally clueless about economics. It’s my guess that they will push for even more wealth redistribution and drive the falling future of many blacks further away from prosperity and a slice of the American dream.