The media and so-called black leaders like Al Sharpton, Jesse Jackson, and Attorney General Eric Holder are selective in the way they report on crimes. When blacks murder other blacks as seems to happen almost daily in cities like Detroit, Chicago, and the nation’s capital, it’s just another set of statistics used to reinforce the myth that poverty (caused by white people) is the reason for the mayhem.

No one seems to ask why so many poor blacks shake off the angry black man narrative and make something of themselves even though so much of life is stacked against them.

It’s an insult to blacks who beat the odds with self-sacrifice, discipline, and staying out of trouble. They don’t get sucked into the role of black victimhood even though they know they are often targets of discrimination.

There is a self-destructive tendency among many blacks today. Black-on-black intimidation is a factor. Not only do blacks have to struggle with a souring economy and latent prejudices, but they have to deal with harassment from other blacks for playing white.

Consider this recollection by basketball great Kareem Abdul-Jabbar when as a 9-year-old he was enrolled in a predominately black Catholic school outside of Philadelphia in the 1950s:

“I got there and immediately found I could read better than anyone in the school. My father’s example and my mother’s training had made that come easy. I could pick up a book, read it out loud, pronounce the words with proper inflection and actually know what they meant. When the nuns found this out they paid me a lot of attention, once even asking me, a fourth grader, to read to the seventh grade. When the kids found this out I became a target…

“It was my first time away from home, my first experience in an all-black situation, and I found myself being punished for doing everything I’d ever been taught was right. I got all A’s and was hated for it; I spoke correctly and was called a punk. I had to learn a new language simply to be able to deal with the threats. I had good manners and was a good little boy and paid for it with my hide.” (Kareem Abdul-Jabbar, Giant Steps: The Autobiography of Kareem Abdul-Jabbar (New York: Bantam Books, 1983), 16. Quoted in Jason L. Riley, Please Stop Helping Us: How Liberals make it Harder for Blacks to Succeed (New York: Encounter Books, 2014), 42-43.)) 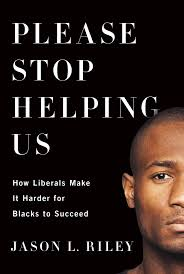 Not everything can be blamed on racism, bigotry, and poverty since there are millions of black men and women who rise above these obstacles while still having to confront any number of inequities.

And it’s not just blacks who have bought into the black victimhood narrative as a recent study concludes.

“What low-income whites in England and ghetto blacks in the United States have in common is a generations-long indoctrination in black victimhood. The political left in both countries has, for more than half a century, maintained a steady and loud drumbeat of claims that the deck is stacked against those at the bottom.”

The black victimhood narrative is being used by politicians to build a perpetual voting base. It’s a revival of the plantation with the illusion of freedom.

This Mongoose Will Show the GOP How to Beat Liberals

All of a Sudden the Bible Matters to John Kerry