The letter stated in part:

Perhaps the Gallery is unaware that Ms. Sanger supported black eugenics, a racist attitude toward black and other minority babies; an elitist attitude toward those she regarded as “the feeble minded;” speaking at rallies of Ku Klux Klan women; and communications with Hitler sympathizers. Also, the notorious “Negro Project” which sought to limit, if not eliminate, black births, was her brainchild. Despite these well-documented facts of history, her bust sits proudly in your gallery as a hero of justice. The obvious incongruity is staggering! 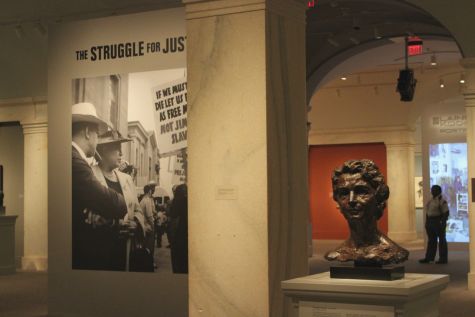 As expected, the Smithsonian has denied the request. And why shouldn’t it since abortions are “safe and legal”?

Even though a Confederate flag is harmless, it’s been removed from every government edifice known to man. Planned Parenthood still kills minority unborn babies daily in its “clinics.”

Like Hitler, Sanger advocated eugenics – the extermination of people she deemed “undesirables.” Finding that the American people rejected that idea, she then switched to birth control as a way of controlling the population growth of black people and others.

I posted a previous article and commented on Facebook that this issue might have “traction.” It seems it does considering the letter Bishop Jackson received.

“We are going to the National Portrait Gallery,” Bishop Jackson declared.

We have a petition signed by over 9,000 people at this time. We’ll present the petition to the gallery and personally demand that they remove Margaret Sanger’s bust and all images of her from the “Struggle for Justice” exhibit – which includes, by the way, Martin Luther King and Rosa Parks!

Bishop Jackson said the fact Sanger is held in high esteem is “outrageous.”

“We will not rest until it’s taken down,” he asserts. “We want to make sure that everybody in America knows who Margaret Sanger actually was. We think that will put Planned Parenthood and what they do in the proper perspective and I hope this will be one more nail in the coffin of Planned Parenthood.”

As LifeNews previously reported, “Margaret Sanger wrote a few books that revealed how she viewed minorities and the poor. In her book, Pivot of Civilization, she describes African-Americans and immigrants as ‘human weeds,’ ‘reckless breeders,’ and ‘spawning… human beings who never should have been born.'”

There is an undercurrent of resentment of our belligerent government coming from all sides. As long as it remains peaceful, it’s a good thing. It would be a great thing if blacks turned away from their devotion to the Democrat Party over this issue.

Would Geraldo Rivera Have Made a Good Nazi Sympathizer?