The billboard pictured below is causing a great deal of controversy. It’s about the prophet Muhammad. As expected, those in the Muslim community are upset. 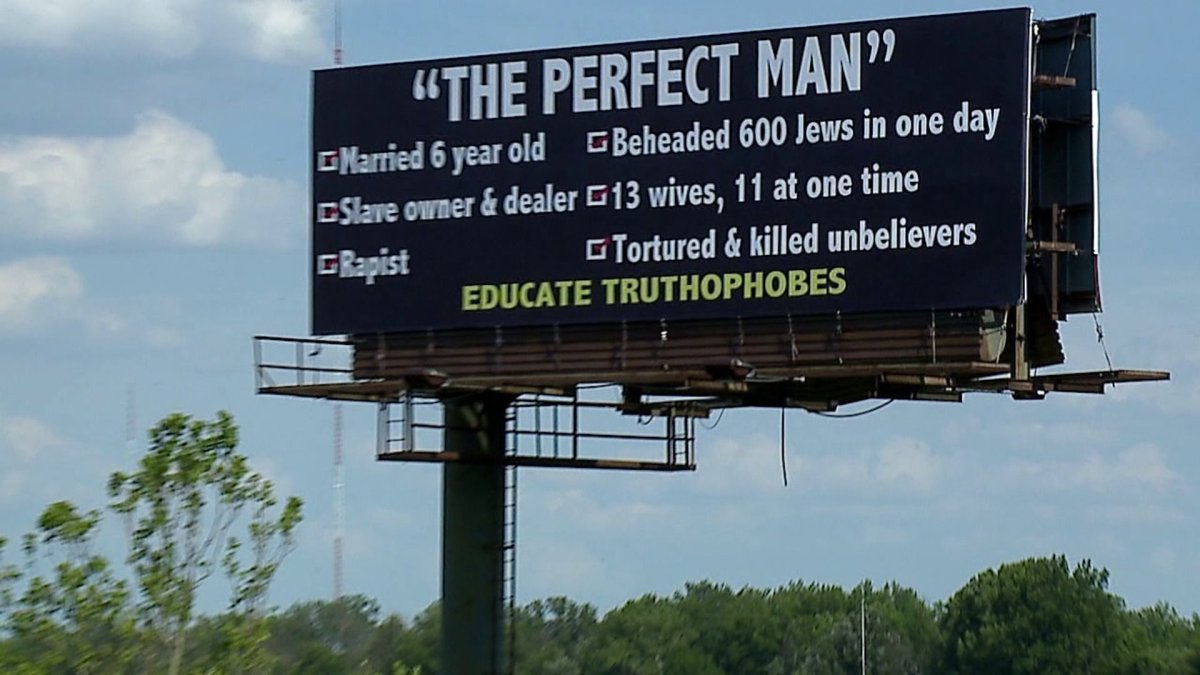 The following is from USA Today:

An anti-Muslim billboard disparaging the prophet Mohammed that can be seen from an Indiana highway on the east side of Indianapolis is drawing concern from local Muslims.

Now, Islamic leaders in Indianapolis are challenging those responsible for what they say are offensive and untrue statements to stand by their words, shed their anonymity and explain their motivations.

“It is a horrible billboard. I’m outraged by it, but saddened at the same time …  and I would like to know who is behind it,” said Rima Shahid, executive director of the Muslim Alliance of Indiana. “It seems very cowardly to me. If you have some kind of stance, you should want to stand up next to your statement. I didn’t think there was any room for hate in our city. This billboard tells me otherwise.”

Faryal Khatri, a spokeswoman for the Indianapolis-based Islamic Society of North America, said not only is the billboard not true, it is hurtful to her as a practicing Muslim.

U.S. Rep. Andre Carson, a Democrat from Indianapolis, also says the billboard is “untrue and that the billboard’s author takes Islamic text and history out of context ‘just like al-Qaeda, ISIS and the Klan do to religious texts to justify their bigotry.'”

“Untrue”? I suppose this is true?” “Jesus is Muslim (yes, we use the present tense.)”

Where were the leaders from the Islamic community and Rep. Carson when anti-Christian billboards were put up by atheists? Like this one: Billboard wars have been going on for a long time. There have been ant-Christian, anti-Mormon, and a lot of anti-atheism billboards, but they get scant attention from the left and left-leaning newspapers like USA Today.

I suggest that those who are denouncing the anti-Muhammad billboard counter its message with a factual rebuttal. That’s what Christians have been doing for centuries. What Muslims and their leftist supporters want is a special dispensation. They want the government to forbid the right to criticize their faith.