Bernie Sanders is a Socialist with Power and a Government Club

A meme is going around showing a young man being pushed aside by an armed police officer. Here’s what’s written over the image:

Arrested for fighting for civil rights for African Americans. Name this guy.

The bespectacled young man is Bernie Sanders. Good for him. He stood up for the personal and property rights of people being discriminated against by a government that retaliated with force if someone opposed it.

He had every right to be incensed by the injustice of racial segregation even though it was the law of the land. 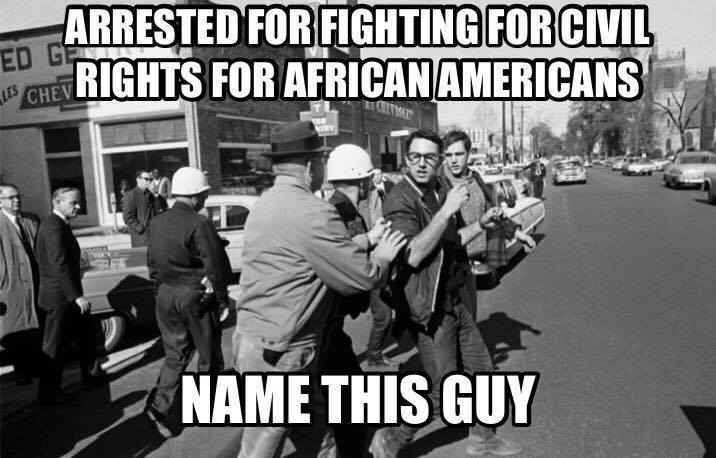 Bernie Sanders was also a conscientious objector during the Vietnam War. Once again, he opposed the power and authority of the government. he was protected his personal right not kill kill other people:

“Bernie Sanders was a pacifist during the Vietnam War and applied for conscientious objector status at the time, his campaign told ABC News. ‘As a college student in the 1960s he was a pacifist,’ campaign spokesman Michael Briggs said in an email. ‘[He] isn’t now.’” (H/T: Daily Caller)

Bernie Sanders is now part of the government, a government armed with the authority and power to fine us and confiscate our property if we do not comply with the theft of our property for use by the State.

Just like blacks were used as slaves and protected by the government to work for the profit of others, today’s politicians like Bernie Sanders make slaves of citizens whose earnings are confiscated so others can profit.

Isn’t that the definition of slavery?

In Thomas Jefferson’s First Inaugural Address, he said that “a wise and frugal Government, which shall restrain men from injuring one another, shall leave them otherwise free to regulate their own pursuits of industry and improvement, and shall not take from the mouth of labor the bread it has earned.”

When the editors of Newsweek magazine led with a cover story “We’re All Socialists Now,” they weren’t far off. The majority of Americans are socialists. They believe that taking money from some people so some of it can be given to other people (e.g., “free” college) is OK as long as a majority of people vote for it.

Force is OK if it favors those who are its beneficiaries.

Bernie Sanders is pushing Denmark as the ideal for economic equality. Creating an economically equal society is easy. All you have to do is take from the productive and give what you’ve taken to the unproductive. Denmark has a theft (income) tax that’s at 38.9 percent, third highest in the world behind Belgium (42.8%) and Germany (39.9%).

Liberals love to complain about conservatives forcing their view of morality on other people (which consists of don’t kill unborn babies and don’t claim that people of the same sex constitute marriage), but they don’t have a problem imposing their view of economic morality on everyone.

If a liberal is OK with killing unborn babies, does it surprise us that they are also OK with stealing money and giving it to other people in order to gain power so they can do more stealing and more redistribution of wealth?

Income Equality Has Made the Poor Wealthy

Bernie Sanders is a Socialist with Power and a Government Club