Archie Comics and the Willful Corruption of Children

In 2011, the Archie Comic book franchise announced that it was adding a homosexual character to join Archie, Jughead, Veronica, and Betty. “Life with Archie,” issue 16, features an “interracial, same-sex wedding of character Lt. Kevin Keller, a white American soldier wounded in Iraq, and Clay Walker, the black physical therapist who helped him recover.”

Naturally, the homosexual-inspired series was lauded by homosexual groups and the American Civil Liberties Union.

In the latest issue of Life With Archie, Archie takes a bullet for his homosexual friend. Archie dies. Do you think the editors have a political agenda, not only about guns but about homosexuality? You know they do.

That puts Archie up there with Jesus, Superman (The Death of Superman), and Spider-Man (The Death of Spider-Man). Giving one’s life for another person is a noble cause, but not when there is a larger social and political agenda driving the act.

Are people buying Life With Archie comics? It doesn’t seem like it. It’s ranked 391 of 460. Archie Comics make up less than 1 percent (0.95 percent) of comic books sold. They needed something dramatic to attract buyers. The free publicity will give the company a bump in sales. But for how long? 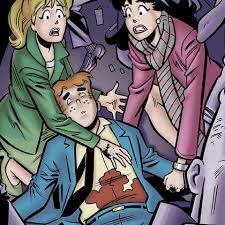 The choice of a black soldier is designed to promote the belief that racial prejudice is equal to sexual prejudice against homosexuals. The comparison is a false one since race is not a behavior. It’s the sexual action of people who claim the homosexual lifestyle that we object to just like we’re opposed to adultery, pedophilia, and polygamy.

Who’s buying the series? Is it unsuspecting parents who have fond memories of the original Archie comics? Parents beware. The new Archie will corrupt, confuse, and make your children susceptible to homosexual predators. I suspect that the well organized homosexual network is behind any uptick in sales:

“According to the Hollywood Reporter, . . . [the] four-issue miniseries in 2011 sold out, and the homosexual character is getting his own solo series starting in February 2012 that will go back to his teenage years and see him get elected president of Riverdale High School.”

When comic books first appeared, children were the market. Most comics stressed traditional moral themes. While there was a dark side to Batman (he was called the “Dark Night”), who made his first appearance in Detective Comics #27 in May 1939, he was not a moral iconoclast. “Orphaned by a thug who shot both his parents,” a ten-year-old “Bruce Wayne swore ‘to avenge their deaths by spending the rest of [his] life warring on all criminals.’”1

Superman was noted as an advocate of “truth, justice, and the American way.”

Today, comics are being used to make social statements, especially in the area of homosexuality and gun control.

I’ve seen this trend developing since the early 1990s. In the March 1992 issue of Marvel’s Alpha Flight comic book series, Northstar, a former (fictional) Canadian Olympic athlete, decides to come out of the closet after seeing the ravaging effect that AIDS has had on an abandoned baby. He decides to adopt the infant AIDS victim. At one point in the story, he cries out, “I am gay.”

“For while I am not inclined to discuss my sexuality with people for whom it is none of their business — I am gay.”

Now it seems that it’s all homosexuals want to discuss, and they want children to be taught about their preferred sexual choices in government schools.

California now requires that homosexuality be portrayed in public schools in a positive manner. Governor Jerry Brown just signed into a law a bill that eliminates the terms “husband” and “wife” from California’s marriage law.

History textbooks are being rewritten to include the agenda. Randy Thomasson, president of SaveCalifornia.com, a leading statewide pro-family organization promoting moral virtues for the common good, says, “Children will be taught to support the political activism of ‘Lesbian, Gay, Bisexual, Transgender, Intersex and Questioning’ (LGBTIQ) political groups, as the bill requires ‘particular emphasis on portraying the role of these groups in contemporary society.’”

Comic books and popular media have softened up young people to be accepting of the homosexual and every other type of sexual lifestyle.

Some are even arguing that sex with children is OK. A judge in Australia has argued that incest and pedophilia “may be accepted” by society.

There’s outrage now, but there was outrage 20 years ago over same-sex marriage. Parents beware!

Why Consistent Pushback is Necessary to Defeat Liberals

Woman Marries Man, Becomes a Lesbian, Marries a Woman Who Became a Man

Archie Comics and the Willful Corruption of Children