Another Example of Liberals Hating Freedom of Expression

Liberalism use the language of freedom of expression and tolerance to gain entry into the political and judicial process only to slam the door shut behind them once they get in.

We’re seeing this take place on an almost daily basis over the issue of homosexual marriage.

Liberals had no problem drumming out the CEO of Mozilla because he supported California’s Proposition 8 which the majority of California voters approved, and yet praised the coming out of Apple’s CEO Tim Cook who called same-sex sexuality a “gift from god.” Although, he never did say which god he was drawing on for support.

Tolerance is a one-way street among liberals. They can beat the drum of toleration all day long as long as their agenda is being played. Liberals approve of freedom of expression only when what’s expressed is something they agree with.

Anybody who disagrees with them is not granted the same toleration status.

Here’s the latest example of a couple being fined thousands of dollars for holding to a personal belief about a sex act which could apply to adultery, polygamy, or marriage to animals  and movements like weddings with a white supremacy or KKK theme:

“The New York state government has fined Cynthia and Robert Gifford, the owners of Liberty Ridge Farm, $13,000 because they refused to hold a same-sex wedding ceremony on their property.

“Two lesbians, Melisa Erwin and Jennifer McCarthy, filed a formal complaint with the state Division of Human Rights, prompting Judge Migdalia Pares to rule that the farm was a ‘public accommodation.’ Pares ordered the Giffords to pay a $10,000 fine to the state and two payments of $1,500, one for Erwin and one for McCarthy.

“The issue began when Erwin called Cynthia Gifford to ask about holding a wedding there. Gifford replied that the farm did not hold same-sex weddings, unaware that McCarthy was surreptitiously taping the conversation.

“The Giffords’ farm is in upstate Schaghticoke, near Albany. They have resided there for 25 years, raising a son, now 21, and a daughter, 17. The Giffords opened their farm for events 15 years ago, allowing receptions of all kinds on their property, including same-sex receptions, just not same-sex weddings.”

These homosexuals weren’t just picking a venue. They were forcing their view of sexuality on the Giffords. The couple could have gone elsewhere, but they purposely chose the Giffords in order to persecute and prosecute them.

So much for tolerance. This Liberal Logic image captures the blatant hypocrisy of liberalism and the Gestapo-like tactics of many in the homosexual movement: 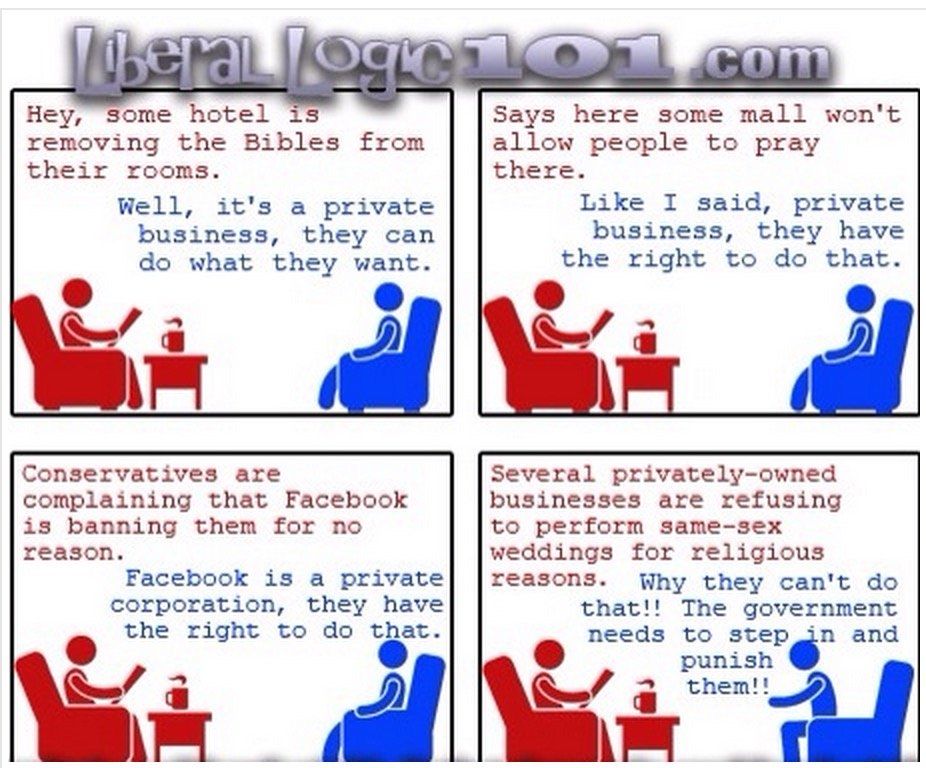 Maryland Muslims Say No to Christmas in Public Schools

Another Example of Liberals Hating Freedom of Expression